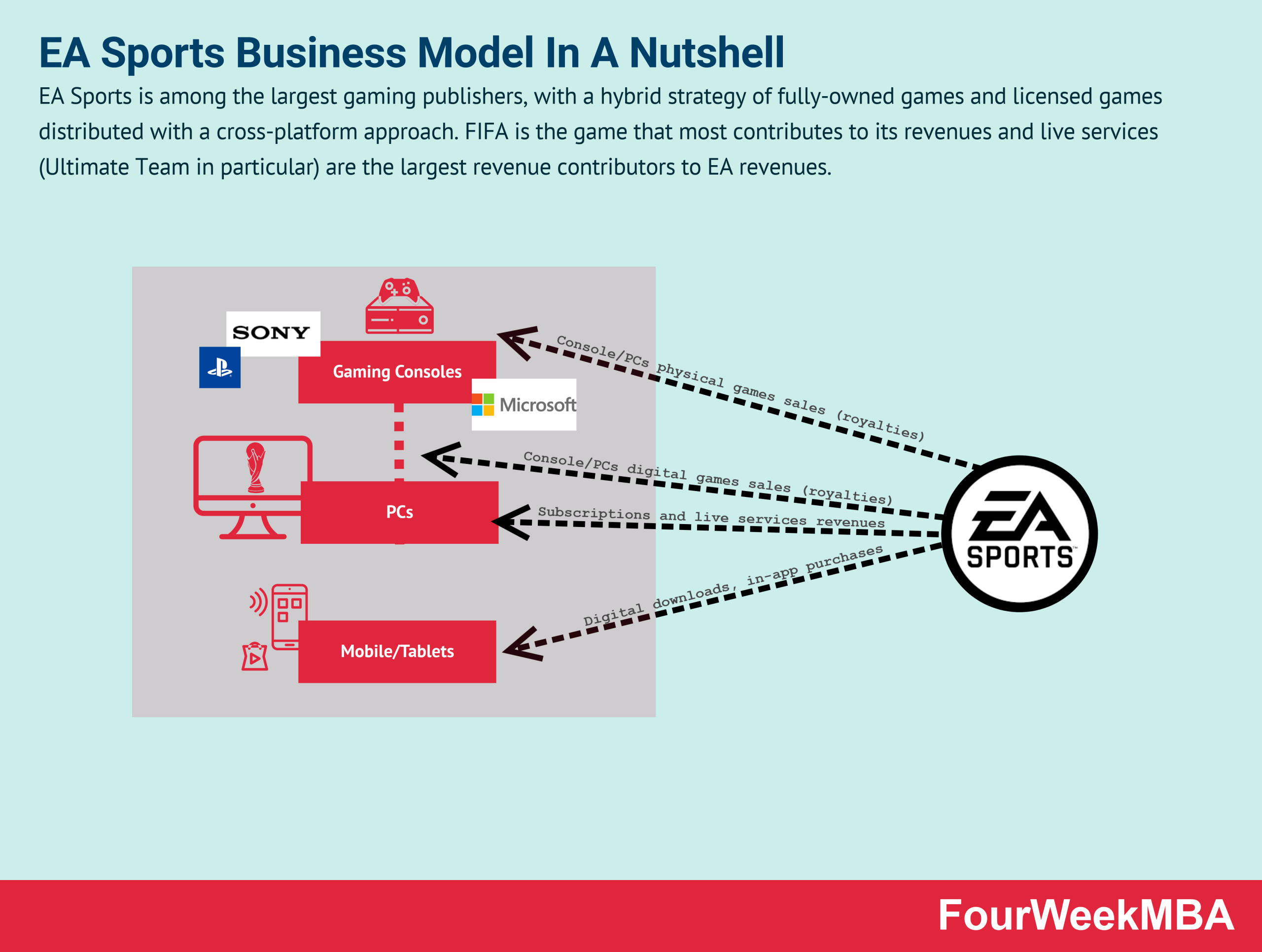 EA Sports is among the largest gaming publishers, with a hybrid strategy of fully-owned games and licensed games distributed with a cross-platform approach. FIFA is the game that most contributes to its revenues and live services (Ultimate Team in particular) are the largest revenue contributors to EA revenues.

A glance at EA Sports vision, mission and strategy

EA is one of the global leaders in the broader entertainment industry, and more specifically within the gaming industry.

EA’s mission is to inspire the world to play.

More specifically EA accomplishes this mission by developing, licensing, marketing, and publishing games and game-related services on a variety of platforms. From game consoles, PCs, mobile phones, and tablets.

EA Sports follows a hybrid strategy, where the company both licenses and develops its own games. For instance, some brands are fully owned by EA (Battlefield, The Sims, Apex Legends, Need for Speed) some other games are licensed (perhaps FIFA, Madden NFL, and Star Wars).

EA is focused on a few genres that go from sports, first-person shooter, action, role-playing and simulation.

By distributing its games via several platforms, EA also pursues different distribution and monetization strategies, depending on the platform where it gets distributed.

There are several models employed by EA to distribute its games. Games can be sold either in:

For the traditional sales model the game will go through the gaming console. This implies a set of distribution agreements with large brands like Sony and Microsoft to make EA games available on the main consoles, PlayStation and Xbox. More precisely, EA will be an authorized distribution partner for its games, and as such it will give back a royalty fee. In short, EA payS the console manufacturers a per-unit royalty for each unit manufactured. On the other hand, for digital games downloaded through the consoles, it will be the gaming console company to release a royalty fee to EA, based on each download.

Here the model is straighforward, the game is sold at a given price, and the companies involved in the licensing/development, publishing and distribution of the game will split the revenues. On the other hand, for other channels, EA uses alternative models.

Perhaps, to distribute and monetize the EA gamers on PCs or mobile devices, EA also made available subscriptions (like EA Origin Access, which makes available to gamers a library of games) and free-to-play for app or marketplaces.

FIFA is the hit game

The largest and most popular game for EA is FIFA. Indeed, in 2019, FIFA represented 14% of the total revenues for the company.

This is the most successful segment for EA, and it’s also the segment where the company is doubling down.

The most popular live service is the Ultimate Team mode associated with sports franchises. Ultimate Team allows players to collect current and former professional players in order to build, and compete as, a personalized team.

Ultimate Team represented 28% of the revenues for EA.

How does EA spend its money?

When it comes to the cost of product revenues, those consist primarily of:

When it comes to the cost of service revenues, those consist primarily of:

Read next: How Much Money Has Fortnite Made?, Understanding The Gaming Industry In A Nutshell