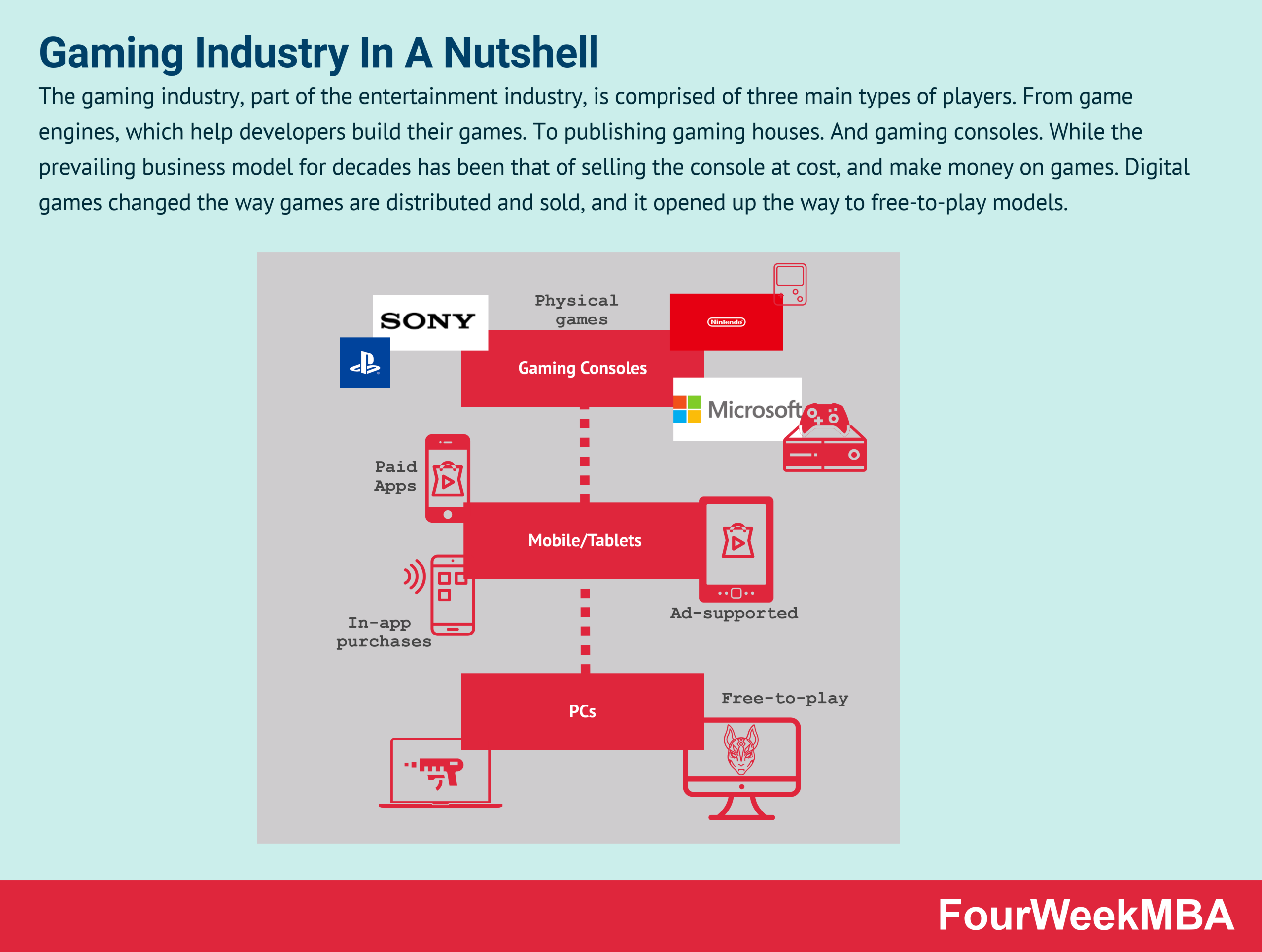 The gaming industry, part of the entertainment industry, is comprised of three main types of players. From game engines, which help developers build their games. To publishing gaming houses. And gaming consoles. While the prevailing business model for decades has been that of selling the console at cost, and make money on games. Digital games changed the way games are distributed and sold, and it opened up the way to free-to-play models.

Game engines are development frameworks that enable developers to have a set of creative tools to build their own games. Examples of game engine companies comprise Fortnite’s developing company Epic Games, which not only develops its own games, but it also provides and licenses the game engine (Unreal), the toolbox for many creators and gaming programmers.

Some of the game engines available comprise Unity, GameMaker, Godot, Unreal and more.

Among the most used game engines, there are Unreal, Unity, Amazon Lumberyard, and more. In many other cases, companies that develop games, develop also their own engines.

The route of developing your own game through some of the gaming engines available is usually what indie (independent) creators do. However, one thing is building a game, another is building and distributing a game that gets noticed. For those reasons, many developers go through gaming developer companies or publishers.

Publishing houses both license and develop their own games. The same applies to gaming console companies.

Gaming developers’ companies comprise companies like Microsoft, Sony, Nintendo, Tencent, Epic Games, EA, Activision Blizzard, and a few more. Of course, the industry is also comprised of many independent developers and self-publishing companies. However, the market is consolidated around those few key players.

Some of those companies are also hardware companies, thus building both hardware and software (like Microsoft, Sony, and Nintendo). Some others are developers and publishers (like EA, Activision Blizzard, and Epic Games).

For companies that are publishers but don’t have the hardware, part of the content will be distributed through the pipelines of gaming console companies (like Sony and Microsoft). Perhaps, a publishing company like EA, one of the most successful games, is FIFA (in 2019, it comprised 14% of EA total revenues).

To understand the gaming industry, we need to look at its pipelines. So how do games get to consumers? How do they get distributed? What are the existing channels? And are those owned by a few players? If so, what sorts of agreements exist?

Some of the most successful gaming genres of our times are:

Those games are usually played on a few devices, which we’ll classify in three main types:

Let’s look now at the common business models used for each of those segments.

The traditional business model for gaming has been the console model. In short, companies mostly sell their gaming console at cost (or tight profit margin) while making money by selling games.

While companies might not be making money by selling consoles. Those same consoles have created a relatively stable pipeline over the last decades, with a few brands dominating the gaming market. The low-priced hardware device, with the high-priced games, it follows a razor and blade strategy.

In addition, as a few brands control hundreds of millions of devices, those companies (for now) hold a strong negotiating position with publishing and developing companies that want to distribute their games through those consoles.

Perhaps, a company like EA that wants to distribute games like FIFA on the PlayStation, it will need to have an agreement with Sony, where Sony will allow them to distribute their games or produce the physical copies that can be sold (as designated replicators).

Thus, the publishing company, like EA, will pay a royalty to hardware companies.

As the mobile and tablet markets have grown, they have also proved powerful hardware platforms for gaming. From there a whole new digital gaming business has sprouted. Thus, gamers increasingly purchase games as digital downloads on apps stores, rather than buying the physical discs.

Digital games opened up the way to new content formats (like streaming) and the way gamers interact between them and with the game itself and the monetization model adopted (for instance, free-to-play has turned into a popular model for digital gaming).

Within the digital games, there are two kind of main distribution/physical platforms: PCs and mobile phones/tablets.

PCs with direct access to the internet and the ability to download games – therefore bypassing the store or the physical console – have become the most effective physical platform for experimentation. Games like Minecraft and Fortnite have become widely popular, thanks to the free-to-play model.

The free-to-play model makes it possible for gamers to have a full experience. As those games are joined by a large audience, the company will monetize by selling within the game ancillary services or digital goods.

As part of the digital gaming sub-industry, mobile devices and tablets also have a different distribution logic. To enjoy a full experience within those devices, gamers will have to download the gaming app, by following the application store (like Apple or Google).

The most traditional business model for gaming saw the games sold via brick and mortar stores, on physical support, attached to a gaming console. The gaming console would be sold at cost or tight margin, and most money would be made by selling the expensive games attached to those consoles.

With the rise of the web, gaming consoles might have partially lost control of the gaming industry market, and it opened new business models. With games that could be freely downloaded through PCs on the web, just like any other piece of software, the free-to-play model has become widely popular among digital games.

Following the logic of software-distribution, the most common business models have sprouted by games that became mass phenomena. Indeed, with the rise of streaming games, as more players could join in, this also led to the e-sport industry. And in turn, to free-to-play models through the web.

Thanks to the phenomenon of mass played video games, this has led to the e-sport industry, with hundreds of millions of engaged gamers across the world. Esports already become a multi-billion industry. Following the lead of the traditional sports industry, e-sports have attracted large brands to cover those events.

Netflix is a streaming company, which revenues come from subscriptions of its streaming services. By Q2 2020, Netflix counted over...