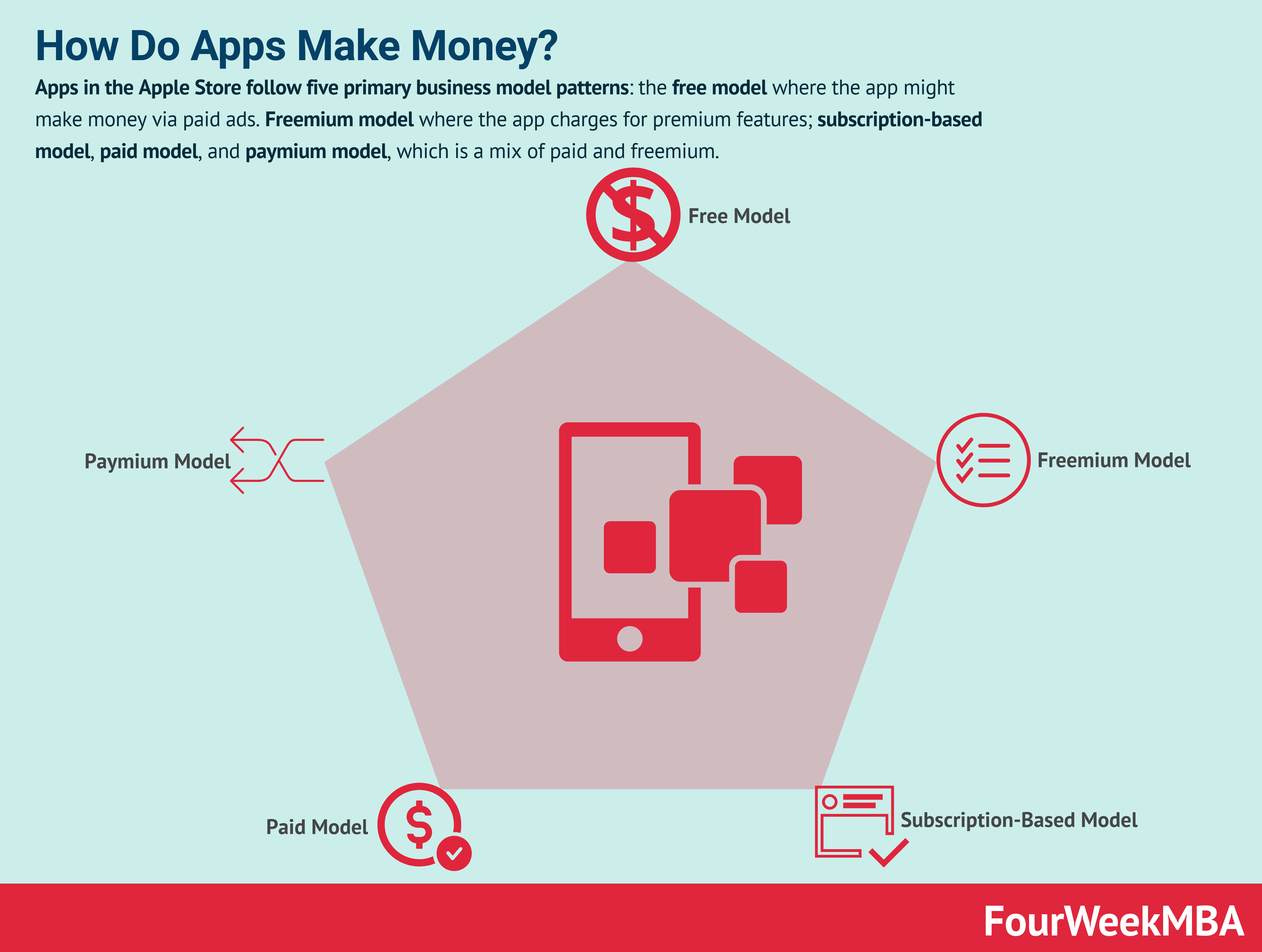 Apps in the Apple Store follow five primary business model patterns: the free model where the app might make money via paid ads. Freemium model where the app charges for premium features; subscription-based model, paid model, and paymium model, which is a mix of paid and freemium.

Users get those apps for free. This makes the whole experience of getting the app frictionless as it removes the barriers to enter and download the app.

How do free apps make money?

Developers either don’t make money, or they do make money by displaying ads within the apps. In the case in which developers decide to make money by showing ads, they need to optimize for a large user base and to have strong engagement.

Indeed, this is the most sustainable way to make enough money from a free app.

Why developers use the free model?

The free model has a few advantages. Some of them are:

While those elements might seem appealing, in reality, given the competition on the Apple Store, many free apps might never turn a dime.

In a freemium app model, the user stills downloads the app for free, which removes the initial friction.

If the user wants to have additional features, or content not available in the free version, she/he will be prompted to buy the premium version of the app.

How do freemium apps make money?

Those apps make money by converting free users into paid ones. This implies the content in the app needs to be optimized for conversion.

Therefore, a basic version needs to be significant enough to convince free users to keep using it, and add features, or limit the usage, so that free users might want more and switch to paid.

Why developers use the freemium apps model?

The freemium model has become quite popular in the Apple Store. However, making money from a freemium, it’s not as easy as it might seem.

Convincing users to switch to paid requires a deep understanding of the users’ base willing to pay for the app. At the same time, a paid app requires a high cost of maintenance for the content it carries.

While you might develop a completely free app, and leave it there. You can’t with an app built on top of a freemium strategy. Continuous support will be needed.

However, similar to a free model with the freemium you can easily reach a larger user base, being recognized as a brand and convert free users in paid ones.

However, you need to make sure to keep offering a great experience for both free and paid users. This is a crucial element.

In fact, by allowing everyone to try the app for free, also those users willing to pay beforehand might opt for the free version before deciding whether to leap to the paid ones.

As pointed out on the Apple Developer Blog:

In most cases, providing a great experience to all users regardless of whether they choose to spend is an integral aspect of the freemium model. The path to monetization is through engagement, and when users are given time to enjoy an app, they may be more inclined to invest in paid features.

As JP Chookaszian, Director of Revenue at VSCO points out in the same article “From their first session with the app, we’re trying to develop trust with users. And we do that by demonstrating value without asking anything from them first.“

The subscription model works by paid memberships that keep renewing automatically until the user decides to cancel the service.

This implies a focus and emphasis on continuous improvement and additional features of the app. Or a reason for the user to keep paying to avoid to lose something valuable.

How do subscription apps make money?

As reported by the Apple Developer blog:

Thus, if the user is retained after the first year, the developer makes more money. In short, Apple tries to incentivize developers to build a model to keep users engaged or to gain them back.

Indeed, if a user unsubscribes from an app service but gets back within the 60 days grace period days of paid service continue to be accounted by Apple so that at the renewal of the first year the developer will earn more.

Why developers use a subscription model?

A subscription model might be the most sustainable in the long run. While the user base initially using the service might be way more limited than the free and freemium model, developers also can leverage on a few strategies to gain subscribers quickly.

As mentioned in the Apple Developer blog, “Apps with auto-renewable subscriptions can offer a discounted price or a free trial for a limited time at the beginning of a subscription.”

In short, developers can use one of the following strategies:

To make this model work, developers have to:

In a paid model, rather then accessing the app via a periodic fee, the users can get access to it via a one-time payment formula. This is extremely appealing to many.

However, by limiting the option of the users, like in the subscription or freemium model, a user will evaluate the app more carefully before proceeding with the purchase.

This implies that the app needs to be well-positioned in terms of the value proposition.

Those apps make money via a one-time payment. To make sure users can evaluate the app fully before the one-time purchase, developers have to optimize the app for things like title, icon, description, preview, and screenshots.

Another lever developers have bundle offering. Those primarily consist of:

Why developers use a paid model?

In respect to a subscription-based app, a paid model has a pricing structure that although might create some friction initially might be in general more appealing.

Many people like one-time purchases. Also, this might also imply a lower cost of having to engage users in the long run, with support costs. On the other hand, a paid model also suggests lower predictability on the forecasted revenues.

The paymium model is a mix of paid and freemium. Where users pay to download the app, but also need to pay to use additional features or get access to additional content. As the initial cost might make users evaluate their purchase more carefully the same principles of paid models apply.

How do Paymium apps make money?

They make money by both an initial payment and an additional payment at download level and afterward if users are converted again to a paid plan.

Developers using this model can leverage tools from both freemium and paid models.

Why do developers choose the Paymium model?

A paymium model is attractive as it mixes the levers from a freemium and paid model.

What apps have had the most grab on our attention in 2018?

According to apptopia.com the top apps are:

Apps like WhatsApp, TikTok, Facebook, and Twitter are among the most used social apps. To appreciate how much attention those apps grab, apptopia also computed the time we spent on those popular apps by session time: