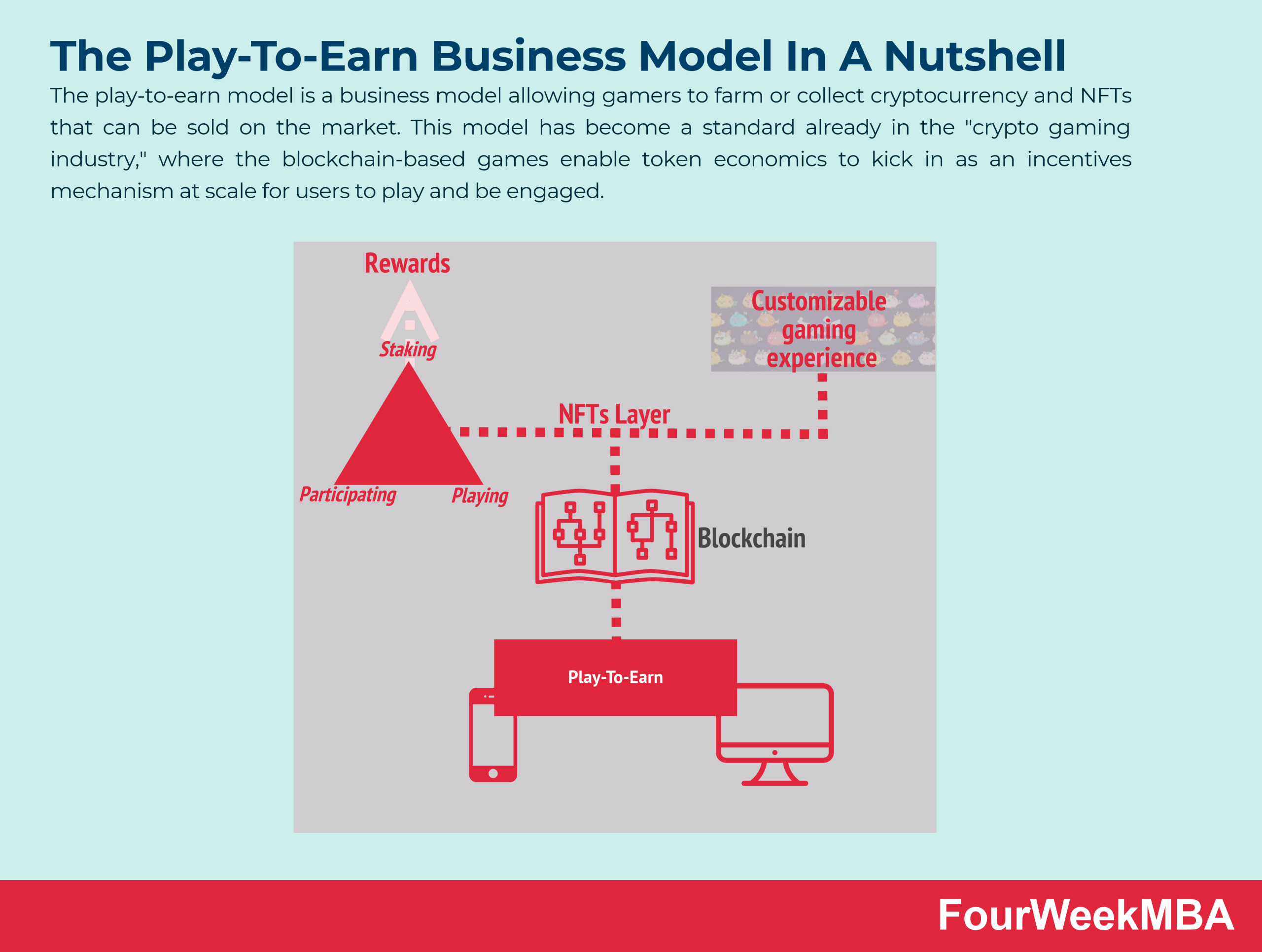 The play-to-earn model is a business model allowing gamers to farm or collect cryptocurrency and NFTs that can be sold on the market. This model has become a standard already in the “crypto gaming industry,” where the blockchain-based games enable token economics to kick in as an incentives mechanism at scale for users to play and be engaged.

From paid games to the free-toplay new standard

For decades, as gaming consoles took over, razor and blande model has been the standard from most gaming companies.

In short, think of Microsoft’s Xbox, selling the console mostly at cost, while selling the games at wide premium. Yet, as new hardware platform came to the market, there has been a shift in the last decade. With the advent of mobile consoles, with iPad and iPhone leading the way, the gaming industry has transformed.

Therefore, the gaming industry moved from a premium model, where games would be sold at wide margin, to a free-to-play model.

Companies like Epic Games, with Fortnite, mastered this model. In fact, as most of the distribution for these games passed through mobile marketplaces, like the App store, a free-to-play logic helped those games to gain traction, and wide distribution very quickly. While the games got monetized through custom gaming experiences.

This model has worked as an incredible flywheel for Epic Gamtes.

Yet, as new technologies, like blockchain, which enable incentive mechanism at scale, picked up, another shift is happening, that of the play-to-earn model.

Beyond free-to-play and into play-to-earn

Gaming has traditionally been a one-sided relationship, where game developers and owners reap the financial rewards while players simply have fun or are encouraged to keep spending.

However, a new paradigm is emerging in the gaming industry. The play-to-earn model allows gamers to earn in-game rewards simply by playing the game. Rewards take the form of digital assets, cryptocurrency, and in-game resources that are tokenized on the blockchain.

Giving gamers ownership of in-game assets and then allowing them to increase their value through gameplay are the key components of the play-to-earn model. Gamers who participate in this economy are rewarded for putting time and energy into the game, creating value for other gamers and the game developers in the process.

The gaming industry itself has experienced tremendous growth in recent years with the global games market become already a multi-billion dollar industry. To some extent, growth has been driven by the COVID-19 pandemic. But it has also been driven by the emergence of Web 3.0 and the Metaverse.

The play-to-earn model can be very powerful, as it adds up an incentive layer for users, which might work as further enhancement for network effects to pick up.

How does the play-to-earn model function?

Technically, games operating under the play-to-earn model with a mixture of gaming and finance fall in the GameFi category.

Each game provides financial incentives to play and progress, with the gamer usually required to repeat specific actions over time. Income is generated in three main ways:

Each NFT may represent a character, item, or some other game collectible. They may be purely cosmetic in nature or fulfill a purpose.

Some play-to-earn games allow players to lock up NFTs or cryptocurrencies in smart contracts to earn rewards.

For instance, staking tokens on the MOBOX GameFi platform rewards users with a MOMO NFT Mystery Box. Each box contains a random NFT with variable scarcity that can then be sold on the secondary market.

Blockchain and the play-to-earn model

However, cryptocurrency game assets exist on a blockchain. This means ownership and legitimacy are easy to prove. The security of a blockchain network also ensures assets are never duplicated, hacked, or exploited in ways commonly seen in traditional games.

Perhaps most importantly, blockchain games increase the value of in-game items through scarcity. When items are tied to the blockchain, they are unable to be duplicated to such an extent that the value of the item is reduced.