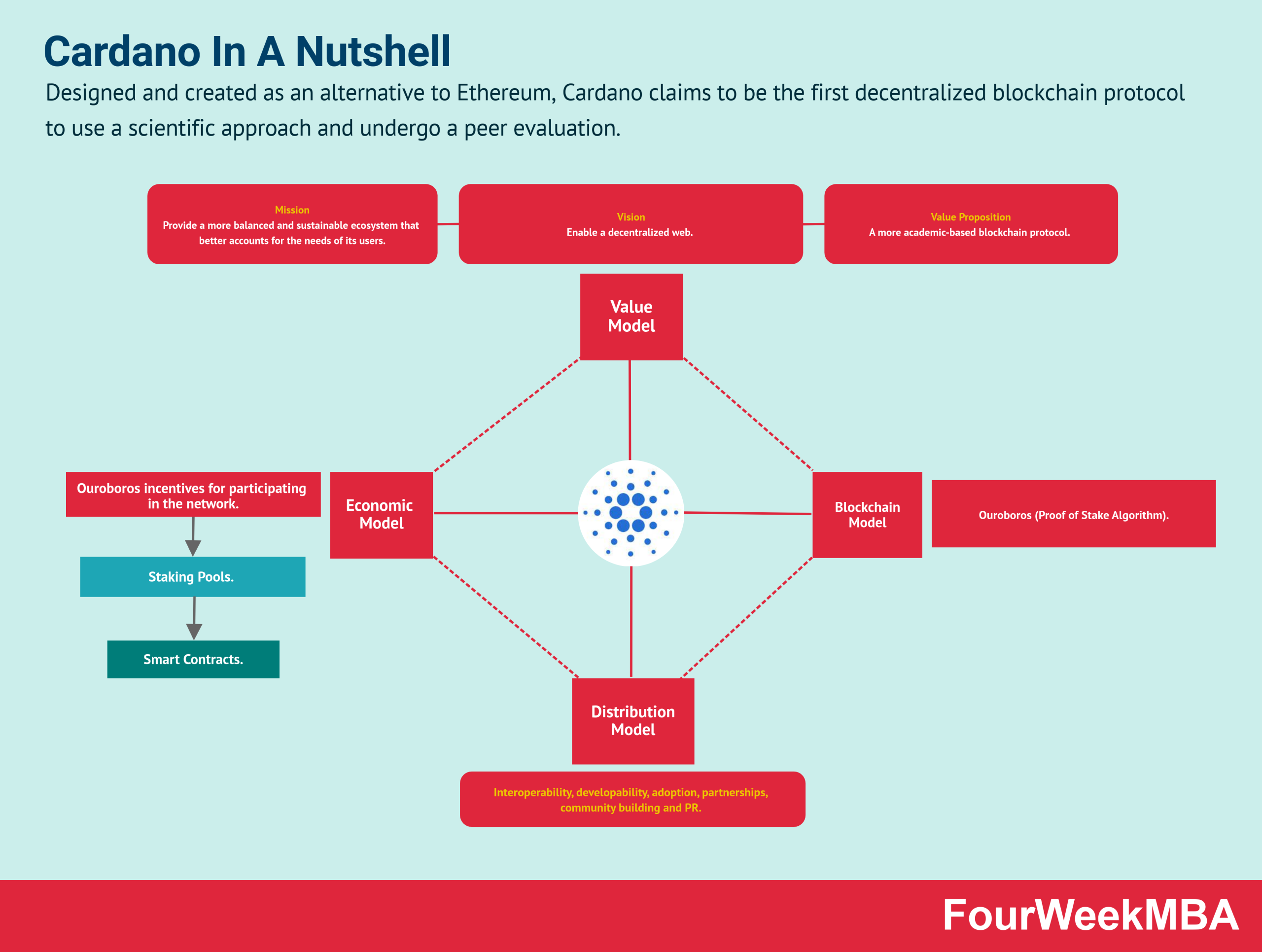 Designed and created as an alternative to Ethereum, Cardano claims to be the first decentralized blockchain protocol to use a scientific approach and undergo a peer evaluation.

Cardano in a Nutshell

Cardano is now one of the most sizeable cryptocurrencies in terms of market cap. Designed and created as an alternative to Ethereum, Cardano claims to be the first decentralized blockchain protocol to use a scientific approach and undergo a peer evaluation. The team behind Cardano intends to build a blockchain platform that can process more transactions at a lower cost. Furthermore, the developers integrated the distributed ledger technology and the smart contract infrastructure into Cardano’s protocol to protect its users’ data.

Cardano came into the cryptocurrency world in 2015.

Founded by Charles Hoskinson, which as we saw was among the Ethereum’s core development team (even though he stayed for just a few months), he then departed (or perhaps was ousted) from the project to start after a few years Cardano. According to the book “Out of The Ether” Charles Hoskinson wasn’t exactly the kind of person you want to have in a team and that you might want to trust. According to that account, eventually the disagreement and fight with Gavin Wood (Vitalik Buterin’s right wing man who later built Polkadot and Kusama) that finally had  Charles Hoskinson (beyond various accounts of him acting strangely) kicked out.

As later on Charles Hoskinson explained his behaviors in the initial development team, as a “philosophical disagreements about how things ought to be run”  and he further highlighted “first there was a fundamental disagreement about business strategy and execution vision and I felt a for-profit model with VC money to build the protocol made a lot more sense than the other.”

Another dimension was instead interpersonal, as Charles Hoskinson explained “we have for six months been living like hippies you know in the switzerland house and he – referring to Vitalik Buterin – was traveling around the world and communication was very siloed and paranoia and fear started building up and there’s like three books now written about this and those books you know they paint a portrait that there was a bunch of very brilliant people that got two doses of brains and half a dose of social skills myself included and when you put them into a high stress hippie-like situation it breeds a lot of conspiracy theories and fear and these types of things and frankly there was just too many founders so at some point you have to consolidate and there was really two different paths that vitalik could choose he was sitting in the middle he could pick the business side which is what i was advocating.”

Going back to the protocol, Cardano is a two-layer platform, allowing the system to become more flexible and more easily maintained. Sidechains enable the communication between these two layers, namely:

It is also interesting to note that Cardano has its Proof-of-Stake algorithm called Ouroboros. Ouroboros supports nodes throughout the network to reach a consensus. The level of security displayed by Ouroboros likens it to that of Bitcoin’s blockchain. The security of which has never gotten compromised.

Cardano is a project that began in 2015 as an effort to change the way cryptocurrencies are designed and developed. The overall focus beyond a particular set of innovations is to provide a more balanced and sustainable ecosystem that better accounts for the needs of its users as well as other systems seeking integration.

As established, Cardano is a project that launched in 2015 to modify the way cryptocurrency designs get developed. Like many open-source projects, Cardano began without a comprehensive framework nor an authoritative white paper. Instead, Cardano became an experimental project as it embraced multiple design principles and different engineering best practices, thereby providing leeway for exploration. These principles and practices are the following:

Coming from these unstructured ideas, the team behind Cardano began exploring cryptocurrency literature and building a toolset of abstractions. From this research arose IOHK’s extensive library of papers, several survey results including a recent scripting language overview and an Ontology of Smart Contracts, and the Scorex project’s birth. Furthermore, this research brought about an appreciation of the unusual and sometimes counterproductive growth of the cryptocurrency industry.

Cardano uses Ouroboros, which as it claims is “is the first provably secure proof-of-stake protocol, and the first blockchain protocol to be based on peer-reviewed research.”

As Cardano claims “Ouroboros solves the greatest challenge faced by existing blockchains: the need for more and more energy to achieve consensus.”

In short, as this is a proof of stake protocol (the same kind to which Ethereum 2.0 is moving toward) Cardano claims that with Ouroboros, Cardano “is able to securely, sustainably, and ethically scale.” Indeed, Ouroboros (its name come from an ancient symbol depicting a serpent or dragon eating its own tail) as a proof-of-stake protocol it distributes control based on stake pools. At each stake pool a “slot leader” is assigned. More precisely Ouroboros divides chains into “epochs” which are subdivided into time slots. A slot leader gets elected and she/he will be responsible for adding a block to the chain.

PDCA Cycle: The Plan-do-check-act Cycle In A Nutshell

The PDCA (Plan-Do-Check-Act) cycle was first proposed by American physicist and engineer Walter A. Shewhart in the 1920s. The PDCA cycle...