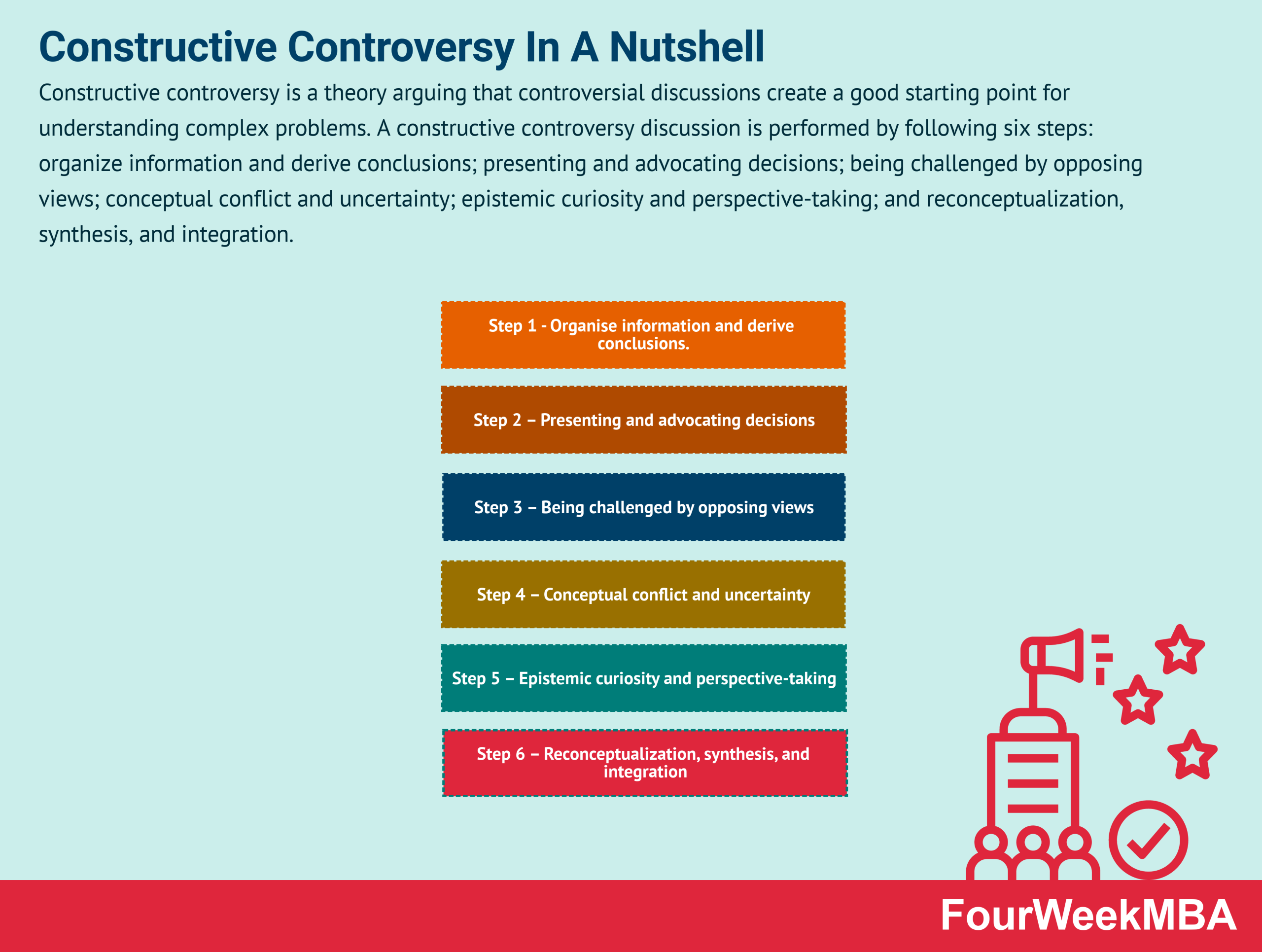 Decision making is an inherently controversial practice because disagreement and conflict are inevitable. Controversy arises because people make decisions based on perspectives, experiences, and rationale that are unique to them.

Instead of suppressing a difference of opinion or alternative solutions, the model encourages individuals to consider the rationale behind opposing views. Each group member is encouraged to validate their reasoning while seeking to accommodate the reasoning of others.

A constructive controversy discussion is performed by following six steps:

During this initial phase, everyone formulates a conclusion based on their current (but usually limited) perspective. While each person has confidence in their unique perspective, high-quality decision-making results when alternatives are properly evaluated.

When an individual presents the rationale behind their conclusion, they engage in high-level reasoning strategies. This deepens their understanding of the problem or decision. It also helps the individual defend their position against the position of someone else.

The continual and somewhat cyclical process of advocating and defending a position reinforces high-level reasoning. Over time, greater amounts of information are fed into the decision making process.

Step 3 – Being challenged by opposing views

In a constructive controversy, group members critically analyze one another’s positions to discern strengths and weaknesses.

Opposing positions encourage individuals to research information not currently known to them. This helps them appreciate opposing positions which may indeed be advocated after further research.

When an individual has their position criticized or challenged by information that is incompatible with their views, uncertainty develops.

Uncertainty can be unpleasant, but it stimulates epistemic curiosity – or the desire to obtain new knowledge to stimulate intellectual interest.

In turn, this strengthens the reasoning process and makes individual positions more robust. At this stage, there may still be disagreement within the group and any opposition should be dealt with intellectually and cooperatively.

Each individual must have a desire to look at an issue from multiple perspectives and consider facts in different ways.

Each member of the group has now presented their best case solution. However, teams following the constructive controversy process should avoid simply choosing one solution from the list

Instead, the goal is to synthesize (integrate) different ideas and facts into a single, unifying solution. Synthesis means viewing the issue from a variety of perspectives and generating several means of applying the evidence in practice.