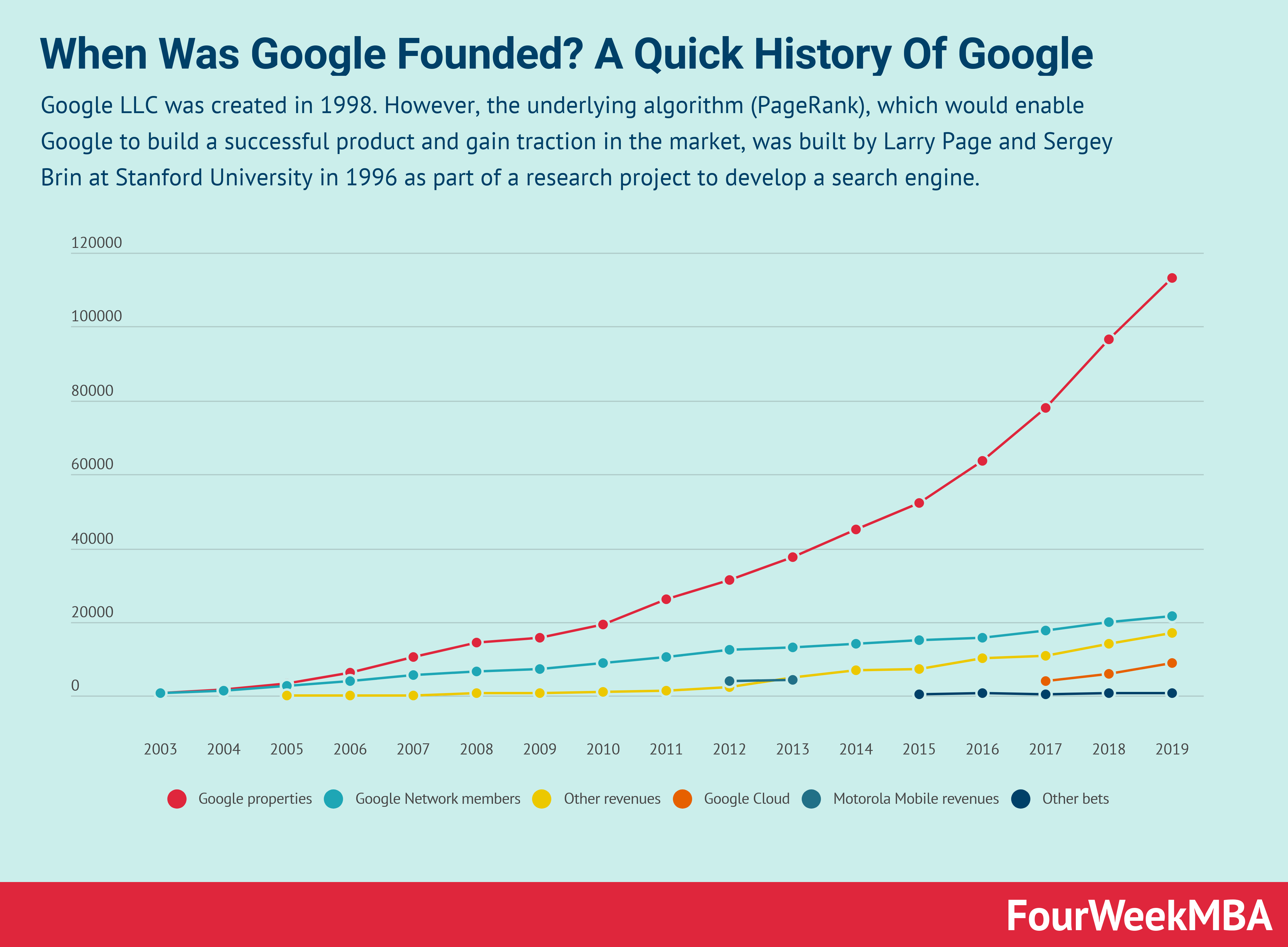 Google LLC was created in 1998. However, the underlying algorithm (PageRank), which would enable Google to build a successful product and gain traction in the market, was built by Larry Page and Sergey Brin at Stanford University in 1996 as part of a research project to develop a search engine.

A quick history of Google

Before we get to the history of Google, based on the FourWeekMBA‘s perspective, I want to highlight that this is one of the possible ways this story can be interpreted.

And that history makes sense only in hindsight and that overall the whole success of Google as a company has been driven by factors which are hardly detectable if not after the unraveling of the story.

Thus, rather than taking this as a lesson in business success, I’d rather take it as a perspective on the overall evolution of the web and how business trends form.

Google surfed extremely well the transition between an early-born web (not Internet which was born way before that) and what would become an infant web (how we know it today).

As a tech giant Google also shaped and shapes the web of today, thus enabling the creation of new business trends, that companies in the market can surf to gain traction.

This era which might last a few decades will go toward a mature web, and how it will turn out to be will depend on many, not foreseeable factors.

So let’s start with a statement from Google‘s founders, back in 2017:

We’re in an era of great inspiration and possibility, but with this opportunity comes the need for tremendous thoughtfulness and responsibility as technology is deeply and irrevocably interwoven into our societies.

This is what Sergey Brin said in the 2017 Alphabet founders’ letter.

The beginnings with PageRank

PageRank helped solve a critical problem in the early-web, that of helping people surface the web by finding relevant information with the exponential growth of web pages.

Indeed, PageRank was a scalable search engine, a major attempt to bring more order and value to users who finally could get out of walled gardens like AOL and find anything they needed.

And as a product, it was probably 10x compared to existing players. This seems an acceptable explanation as Google entered the market late. And when you do enter late, usually you can gain traction by offering a product which is superior.

In the paper “The Anatomy of a Large-Scale Hypertextual Web Search Engine” where Page and Brin presented their first prototype of Google (initially known as BackRub). With full text and hyperlink database of at least 24 million pages, in a paragraph dedicated to advertising, they explained: “We expect that advertising funded search engines will be inherently biased towards the advertisers and away from the needs of the consumers.“

Indeed, when they met Bill Gross, founder of GoTo, which would later become Overture, probably the first search engine to introduce an auction-based system for bidding businesses, the two young fellows didn’t seem excited about the prospect of following that model.

Until they figured a business model which would prove effective as they would later mention in a shareholders’ letter:

Advertising is our principal source of revenue, and the ads we provide are relevant and useful rather than intrusive and annoying.

By 2000 Google was already a key player in the search industry. However, it hadn’t yet figured a scalable business model. At the time Google was still relying on closing advertising deals by using its sales force.

Thus, Google finally had a scalable advertising platform, Google AdWords, based on “objective metrics” (this would be the key ingredient for its success) by disintermediating the advertising agency, at least in the digital world.

And it managed to build a scalable platform, Google AdSense, that incentivized publishers, or anyone owning a website to easily monetize their traffic. This enabled a few interesting web trends which Google shaped, thus proving its potential as a business:

If you want to have a more in-depth overview of Google history read this.

When we think in bits rather than atoms, Google is a vertically integrated company. And this vertical integration starts from the physical world made of hardware (Google data centers, Google mobile devices, Google Home voice assistants, and more) and it continues in the bits world made of software, algorithms and tech products (Chrome Browser, Google search engine, YouTube, and more).

Google, now Alphabet, surfed the incredible growth of the web, extremely well, and it then became itself one of the key nodes of the web we know today.

As a key node, the company today shapes the trends that formed on the web, thus opening up new threats but also new, important opportunities for those who are able to see them.

Some of the trends worth mentioning are:

As Google scaled, it changed drastically as an organization. To prevent phenomena that can negatively impact the Google Business Model and attract unwanted attention by regulators, Google might like and favor stronger brands.

As the reasoning goes that a stronger brand might give more guarantee of quality and fact-checking ability as it can invest more in that.

So as Google scales its ability to fact-check information, publishers who have more resources to do it internally might also be more trustworthy.

Digital advertising business model no longer sustainable for most online advertisers now reverting back to a subscription, see the NYT business model.

While the subscription business model does work financially, it also might reduce the visibility of the brand, thus opening up opportunities to those able to build an asymmetric business model.

Blogging has become a highly competitive industry, and starting up from a wide niche or industry can’t be extremely hard, thus it might make sense to identify microniches.

Building a business inside a walled garden

Google‘s core business (search and discovery) is becoming a walled garden. That requires small businesses to initially give up something that Google wants in exchange for traction.

Then a small business should build a more independent distribution strategy, and brand to prevent too much dependance of Google as core distribution.

Google’s core products are already used by billions of people. Google search engine and YouTube are the most popular sites on earth (at least in the Western World).

As Google transitioned toward becoming a mobile-first and AI-first organization, this makes its products even stickier and engaging for billions of people, thus attracting more eyeballs, for longer time within Google products.

This means that those able to see this opportunity can build valuable small and medium businesses on top of Google. How? Read next.

Just like in the past companies like Booking, TripAdvisor and other platform business models became successful and billion-dollar businesses, thanks to Google sending them an endless stream of qualified traffic.

Now Google operates itself as a super-platform that offers within its walled gardens dozens of platforms (Jobs, E-commerce, Travel, Publishing and more). That threatens the existence of the platforms initially built on top of Google which now have to redefine their value propositions (unless of course, regulators or an antitrust case might define that as abuse of dominant position and stop Google from expanding in those niches).

Thus, while Google sent traffic out to those platforms in the past, it might now retain it within its walls.

How do you build a business on a super-platform?

If you’re a publisher you might want to look at original content, reporting, in-depth analyses and to invest more and more in becoming the source of the information, rather than a distributor or provider of third-parties content.

If you operate as e-commerce being the retailer, or the manufacturer of that product rather than a distributor might be an advantage as you can leverage on platforms like Google Merchant Center to enhance your distribution.

And more generally building a strong brand, recognized in a smaller space, rather than a traffic center, or aggregator, might be a good entry strategy.

Free AI Tools to build your next startup

Google has transitioned into an AI-first organization and at this stage, the AI side of the Google business model is open and collaborative.

That means you can leverage those AI tools to build your next startup and make it scale. Beware though, as an AI ecosystem will form and Google might be able to monetize it, the company might close that.

For now, the more immediate monetization for Google is through its Google Cloud Business.

In short, those AI tools follow a freemium-like growth strategy where more people joining might get acquainted also with Google Cloud offering, and for now, Google has to keep pushing more and more if it wants to keep up with Microsoft and Amazon.

This gives you plenty of time to build a valuable company. However, as your startup grows you might want to develop your own AI tools and models, to prevent Google one day to take your business away.