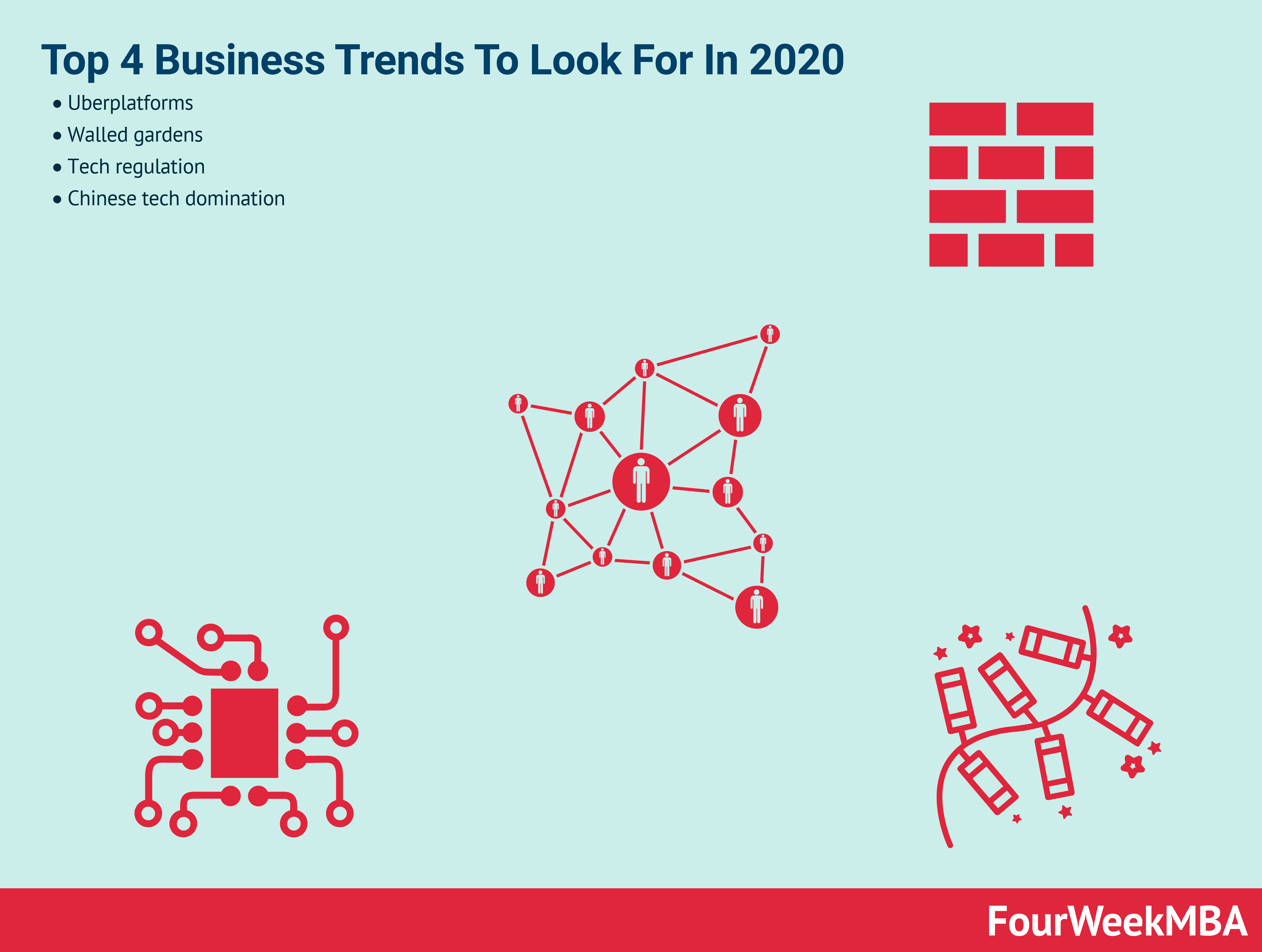 On FourWeekMBA one of the primary focus is to dissect important trends happening in the business world, that have the potential to affect and reshape current industries.

Thus, as a business person, you might want to keep an eye on the following trends.

In the FourWeekMBA interview to Jerry Cuomo, IBM Fellow and Vice President of Blockchain Technologies he highlighted how the Blockchain enables new business models:

Businesses today aren’t structured to work in teams.Yes, there’s business to business, B2B. But even in a B2B transaction, you’re still responsible. Like if you’re in a B2B lending network, and you’re depending on a third party to vet the authenticity of a particular client that you’re lending money to, and they turn out to be a bad actor and the government comes after you for lending money to a bad actor, you can’t say, “Oops, it wasn’t me. It was someone I trusted in my network.” No, you are responsible. You go to jail, they don’t go to jail.

The big trick in the business playbook is to design business processes that can be worked across a team.

In the Internet era, platforms rose as the primary catalyzer of business across the web. As a result of designing, building and maintaining a successful platform, those companies became trillion-dollar ecosystems.

A further step we’re going toward, thanks to the Blockchain, is the potential creation of super or uber-platforms. Those that can be built by combining the capabilities of several digital platforms.

Think of the Uber-platform as an enhanced version of a digital platform. This process will be ready and complete when Blockchain protocols will be mature enough to enable new global entities, as key players.

And the interesting point is those companies part of the uber-platform will act as a single, integrated entity, even though they will be independent companies. We can expect this trend to become mature in the next ten years.

Tip: There is no action yet to take on this trend. Yet it is worth to keep an eye on.

Walled gardens are back

As highlighted in the previous paragraph, uber-platforms might become the norm in the coming decade. There is a current trend though, which for the moment is extremely strong. That is about the platforms that dominate the world as of 2019:

Companies like Google and Amazon, when small startups, focused on growth. As they grew to become tech giants they focused on domination. Domination is achieved when the platform is able to cover the end-to-end journey of its users.

Where a company like Google could not offer a full journey from search to the transaction on its platform (due to technology, and business limitations), it limited itself to perform a core function (search).

When Google first launched, its presumably superior search capabilities were used to enable users to get out of walled gardens. Google‘s growth and distribution itself were propelled by deals like AOL (one of the first walled gardens of the Internet era).

Google‘s value proposition was compelling because it enabled users to get out of those walled gardens to finally explore the web. Google has been the “ten blue links” company for about twenty years.

Starting 2015-16, the company finally managed to roll out a set of features intended to cover more and more of the journey of the users. Today those features are the rule:

The occurrence of Google advanced features covering more and more of the users‘ journey, according to SEMRush sensor.

As competition from other platforms grew, and search technology improved exponentially, Google became a walled garden itself.

While Google still uses open infrastructures (especially to enable contributions and faster growth on the AI side) its core platform is tightly controlled from a business standpoint.

And Google itself transformed in a walled garden, where users are locked-in and provided as much value as possible within Google search results pages. In this transition, Google invaded several verticals (from Travel to Shopping) to become the primary brand people deal with, from search to (almost) purchase.

Tip: This transition of digital platforms in walled gardens is concerning regulators (we’ll see it in the upcoming trend for 2020) and should concern you as a business owner. Any physical business has a component of digital nowadays.

If that is the case you need to understand how to surf this wave or be swept away by that. One way to take advantage of this trend is to look for microniches:

The several data scandals happened in the last years have awakened public concern around the safety of digital platforms. Probably one of the most iconic moments that we’ll remind in the coming decades is those of Mark Zuckerberg before the US Congress.

While Zuckerberg well symbolizes the tech monopolists that dominate the world today, he’s not alone there. Today we have more of a tech oligopoly of companies born and matured with the web.

Proposals have been made to break those tech companies. New technologies, like Blockchain, are awakening again dreams of decentralization. However, this is more of a cultural problem than a tech problem.

Where conventional wisdom assumes that the rise of machines is inevitable, the central questions become about when it will happen. Rather than about how and why it should happen in the first place.

Tip: Not much to do here, but to wait and see what it will happen and of course from a personal standpoint make sure to use those digital platforms with more consciousness.

TikTok is an interesting case because it is the first Chinese player to dominate a space and create a whole new industry (we can’t call TikTok a social media player, although it is stealing space from Facebook and Instagram).

The reasons Chinese tech companies might dominate the Western world isn’t just due to a lack of competition in their own marketplace from outsiders. But also, and especially by the features of the Chinese consumer market, which offers itself as the perfect lab for tech companies to rise and become global players in no time.

In the FourWeekMBA interview with Jeffrey Towson, he highlighted:

China is arguably the world’s most complicated consumer market now.

You go to downtown Beijing, you get more billionaires in Beijing than New York City.

So there’s a huge fragmentation and complexity to them and it’s just getting more so because one, there’s a lot of them.

So when you get a lot of anything, you’re going to get a lot of complexity, and two, you still get this big spread between very, very developed market behavior like Beijing and Shanghai and behavior that’s out in the fields and in the mountains.

So it’s just this hugely complicated subject and the only wayyou can really understand Chinese consumers at this point is you have to go small.You have to study micro populations, Chinese moms, sports enthusiasts, inland consumers, dads.You just have to break it up that way and you find out people are very, very different.

Tip: if you have a physical or digital business look for ways to expand it to Chinese consumers.

We live in an interesting era (I’m sure that many have said that in the previous decades and centuries as well). What makes it interesting is the fact our generation is living a transition between the old and the new cultural, political and economic systems.

The modern economy and political systems have been built starting the end of the nineteenth century when nations formed, and national consciousness became the primary cultural force to shape them.

As the web became commercially viable and commercially mature, it is now in a phase where it has to become culturally and politically so. This implies the transition from old systems and processes to new ones.

Thus, old assumptions become weak and prone to be replaced by new cultural norms. In a phase of transition, nothing seems to be true anymore, it’s all questionable and all relative. At this stage, new assumptions about the world arise, and as they do, new systems are built to replace old ones.

It is important that we are all part of this process and it starts with awareness.

If you follow the FourWeekMBA you know we covered hundreds of business models in the last years. Every year we...