When the pandemic had hit hard the world, there was a wave of what I like to call forced digitalization.

Yet, this wave is waning now:

By April 2022, as the pandemic money had run out, and many got back to the office, Zoom’s market cap went lower than $30 billion.

The image above well represents the post-pandemic world!

And we went through a time of forced digitalization where hundreds of billions of dollars from both public and private sectors got poured into digital companies, in the matter of a few months.

No doubt, that created one of the largest bubbles of our times, what we can call the “COVID-Bubble.”

So what’s left of it? 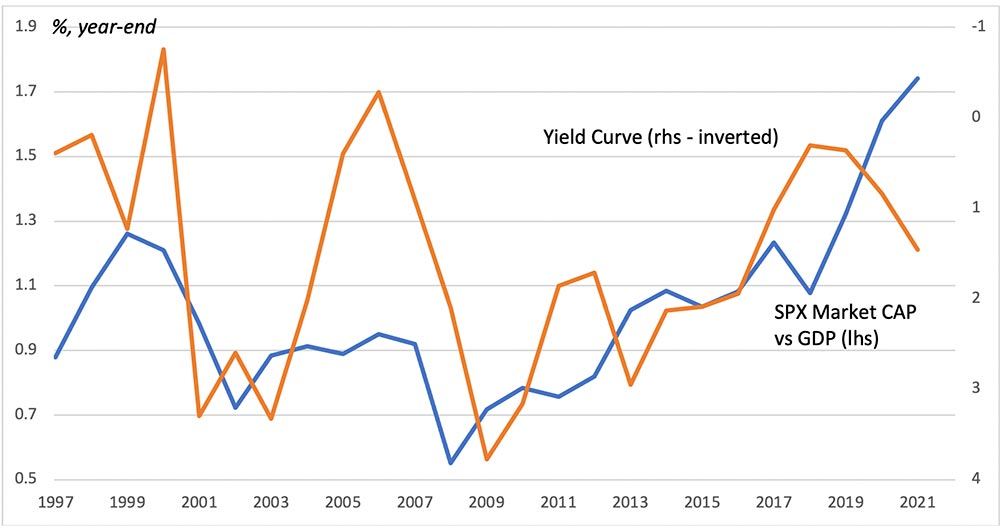 As Yield curve inverts (short-term bonds have higher yields than long-term bonds) has been used in the past as a signal we’re going into a recession, and anyhow a sign of worry in the short-term economic perspectives.

Yet beyond the macroeconomic environment, what’s left of this wave of forced digitalization?

We live in a world that has been redefined in the last years, and indeed some trends have been highly accelerated.

So there are a few developing trends that might become very strong over time.

As the pandemic hit the world, large VC players have been investing worldwide, and as the pandemic is more under control now, VCs are still betting widely outside the US. For instance, YC has kicked off its incubator program for an Indian startup.

And many VC players are betting outside the US. Will the next big tech companies come from India, perhaps?

Every VC fund will become a crypto fund?

Many VC funds have also ramped up their crypto bets. From former a16z Katie Haun, launching a multi-billion venture crypto fund, to a16z and others following suit. Chris Dixon from a16z pointed out that every venture capital fund will become a crypto fund in the coming decade.

Global, distributed teams, and the competition for talent

Working from home has also given the chance to skilled workers to have more options. Thus, forcing most companies to redefine their policies.

On the one spectrum, Mark Zuckerberg seems to be transitioning into a digital avatar, on the other spectrum other big tech players are trying – hardly – to make all get back to the office. Yet, today, many skilled workers value flexibility, as a key component of the company’s culture.

The pandemic has speeded up AR/VR. Many thought this market would have become viable already back in 2015 (when Facebook acquired Oculus) yet it took much much longer.

And VR and AR are two completely different problems to solve. With AR posing much more complexity. However, Meta is spending ten billion to develop the Metaverse. Apple and Google are also ramping up their AR operations.

We might see these platforms finally becoming commercially viable, as there is a push from the top (big tech investing billions) and from the bottom (consumers might be ready for these devices, at scale).

The post-pandemic world also posed important questions about whether we can still rely on a few key players, that dominate the whole business spectrum. Indeed, big tech has been critical during the pandemic (imagine a pandemic life without Netflix, Google Docs, and Amazon).

Yet it also shows the vulnerability of a system based on a few centralized applications. This is creating a push toward the development of new open protocols, that might be used as the platform of the future.

The Metaverse then won’t be a centralized vision in the head of Mark Zuckerberg, but it might become a plethora of nodes in a blockchain-based business world. Let’s see!

Decentralization will also be important for the new balances of power in the energy sector. We’ll see a strong push toward electric vehicles, and new incentives for solar panels or alternative sources of energy.

The opposite risk is true. Indeed, as these decentralizing forces take place, the key big take-payers try to resist them by lobbying the system.

When a company has become so large, to be what I like to call “too big to experiment” as any failed experiment becomes an externality to society, here diseconomies of scale kick in. And the only way to survive becomes (similarly to a tumor) to keep growing at the expense of the system.

Thus, we’ll see a lot of behind-the-scenes lobbying, to try to stiff competition in the business world from these players.

Regulators will feel compelled to act in various areas, from privacy online, to freedom of speech, financial regulations, and more. There might be a few important areas that might change completely in the coming years.

Gennaro is the creator of FourWeekMBA, which reached about three million business students, executives, and aspiring entrepreneurs in 2021 alone | He is also Head of Enterprise Sales for a high-tech startup, which he helped grow at a double-digit rate since the onset | In 2012 Gennaro earned an International MBA with emphasis on Corporate Finance and Business Strategy.
Business Engineering