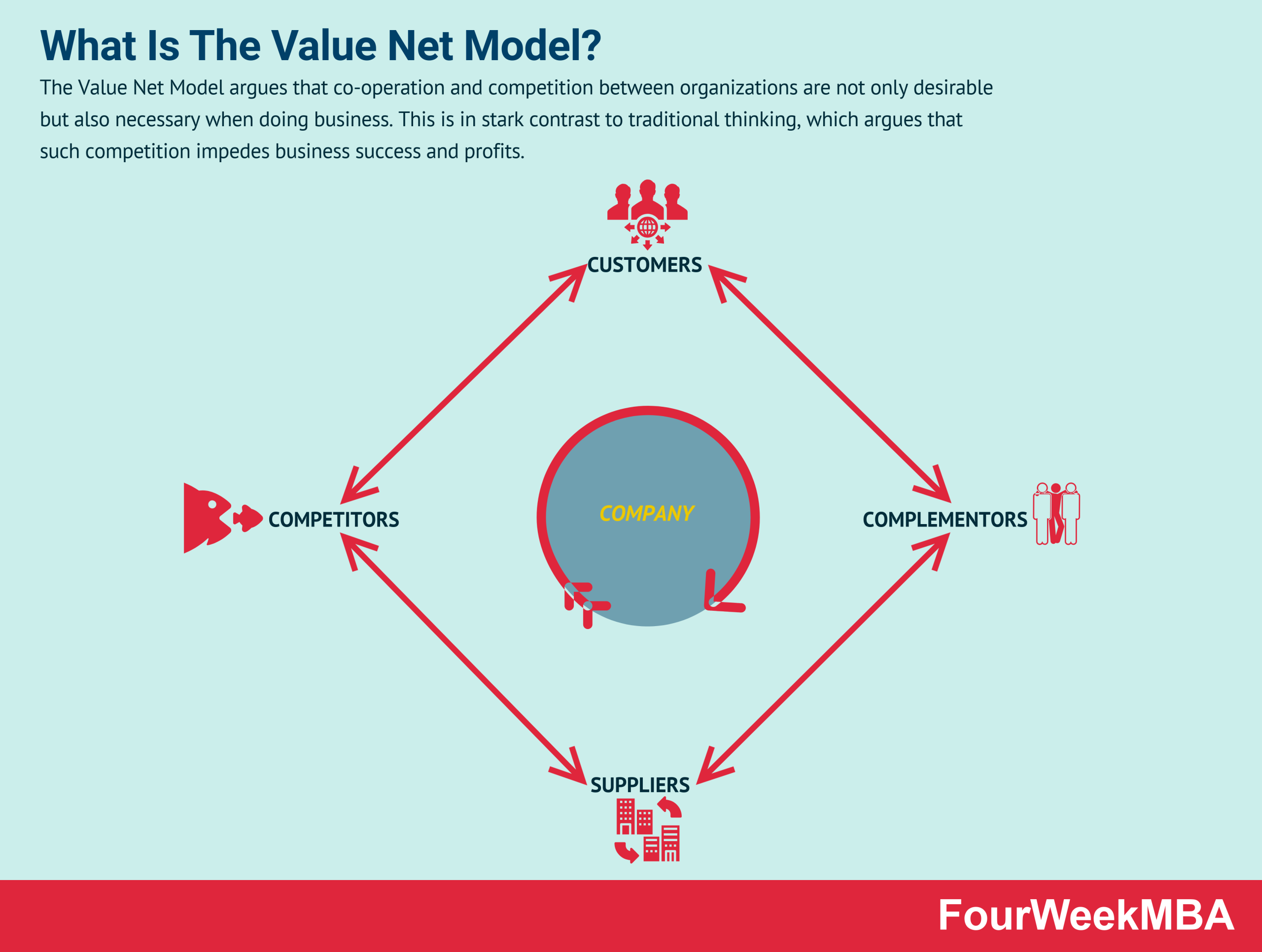 The Value Net Model argues that co-operation and competition between organizations are not only desirable but also necessary when doing business. This is in stark contrast to traditional thinking, which argues that such competition impedes business success and profits.

The Value Net Model was first introduced by authors Adam Brandenburger and Barry Nalebuff in their 1996 book Co-opetition.

Co-opetition is a portmanteau word describing a business strategy that is part competition and part cooperation. Brandenburger and Nalebuff suggest that in modern, dynamic business environments, organizations can achieve far more by working together than they can by working alone.

The first three players are self-explanatory, but it is complementors that deserve further clarification. They are described as any organization that offers something which makes another business stronger. For example, the opening of a new restaurant may increase revenue at the bar down the street since people like to have a drink before their evening meal.

In the context of this model, it’s important to note that organizations work together to provide more value to consumers. They are not engaged in collusion, which is illegal in most countries. Businesses can also work with suppliers and complementors to the advantage of all other parties.

Given that co-opetition is linked to Game Theory, Brandenburger and Nalebuff suggest that strategy formation be treated as a game. To create the framework, it’s helpful to consider the five components of players, added value, rules, tactics, and scope – often represented by the acronym PARTS.

In the first step, the business should determine the players in the “game” or relevant industry that it operates in. The players encompass customers, suppliers, competitors, and complementors. The business must assess each player and determine the potential for a future strategic alliance. External players who are not part of the industry should also be identified, particularly if they bring value to the table.

Added value describes what each player in their respective role can offer a potential alliance. The business conducting the Value Net Model framework should also consider the value it offers through a USP or competitive advantage. Added value should also be considered in the context of two players joining forces to create value for customers or suppliers.

Each industry has its own rules and regulations, and some of these hinder growth. A business should identify the players in their industry who can remove some of these obstacles through partnerships and collaboration.

Competitive business is a complicated, dynamic, and uncertain game. Businesses themselves often use tactics to influence the way other players in the game perceive them – primarily in an attempt to modify their behavior.

When Netscape tried to compete against Microsoft with their new browser, they entered into a price war which they would ultimately lose. However, if Netscape had informed Microsoft of its tactics to occupy a very small and niche segment of the browser market, there is a possibility that both browsers could have co-existed harmoniously.

By their very nature, games are not static entities. Since they are constantly evolving over time, it is important to set clear boundaries from the outset. Business managers should always be prepared for the possibility that the scope expands or shrinks according to fluctuating market conditions.

Read next: What Is Coopetition