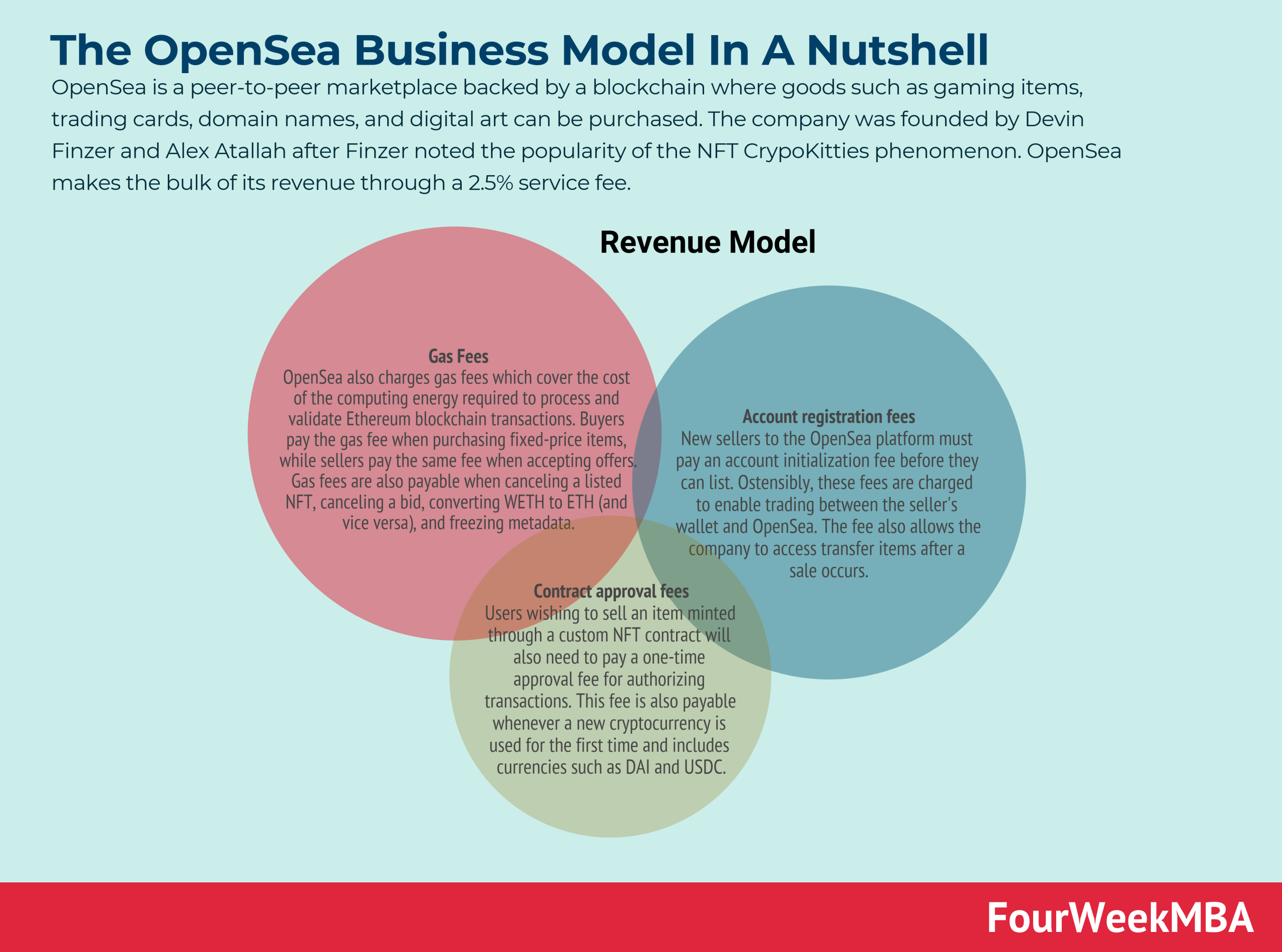 OpenSea is a peer-to-peer marketplace backed by a blockchain where goods such as gaming items, trading cards, domain names, and digital art can be purchased. The company was founded by Devin Finzer and Alex Atallah after Finzer noted the popularity of the NFT CrypoKitties phenomenon. OpenSea makes the bulk of its revenue through a 2.5% service fee. The fee is collected whenever a NFT is sold on the platform. OpenSea charges gas fees to buyers and sellers to cover the cost of applicable blockchain transactions. There are also account registration and contract approval fees when a new account is opened and a new cryptocurrency is used, respectively.

OpenSea is a peer-to-peer marketplace backed by a blockchain where goods such as gaming items, trading cards, domain names, and digital art can be purchased.

The company was founded in 2017 by Devin Finzer and Alex Atallah at a time when non-fungible token (NFT) projects were just starting to attract interest. Finzer became interested in NFTs after witnessing the CryptoKitties project, a tech culture phenomenon where people were paying hundreds of thousands of dollars for collectible video game cats. More broadly speaking, Finzer also wondered if there was more to crypto than simply finance and currencies.

A few months later, he teamed up with software developer Atallah, a Stanford graduate who also had a burgeoning interest in cryptocurrency. They presented a rough idea to a Techcrunch Hackathon in September and were then accepted into the Y Combinator program to take the project further. After an initial pivot, Finzer and Atallah returned to CrypoKitties and its underlying infrastructure. Using something similar, they decided to build a digital marketplace where users could buy or sell NFTs in multiple categories. The OpenSea platform launched in February 2018, describing itself as “eBay for cryptogoods.”

Initially, the OpenSea marketplace relied on game developers to drive business – though new categories were continuously added. The company managed to secure a $2 million round of funding early and in December, acquired competitor marketplace Atomic Bazaar. By the end of 2019, OpenSea was considered to be the leading NFT marketplace.

This position was solidified after the COVID-19 pandemic forced people to stay at home, with the NFT market itself experiencing rapid growth. In fact, NFT sales for 2020 were $94.8 million, equivalent to 30,000% year-on-year growth. During this time, the company had just seven employees and struggled to scale its operations to meet demand.

OpenSea is on track to surpass $27.5 billion in sales volume for 2021 with average daily fee revenue amounting to $4.2 million.

OpenSea has a rather simple revenue generation strategy.

The company makes most of its money by charging service fees whenever a digital asset is sold on its platform.

Gas fees are also payable when canceling a listed NFT, canceling a bid, converting WETH to ETH (and vice versa), and freezing metadata.

Ostensibly, these fees are charged to enable trading between the seller’s wallet and OpenSea. The fee also allows the company to access transfer items after a sale occurs.

Users wishing to sell an item minted through a custom NFT contract will also need to pay a one-time approval fee for authorizing transactions.

This fee is also payable whenever a new cryptocurrency is used for the first time and includes currencies such as DAI and USDC.