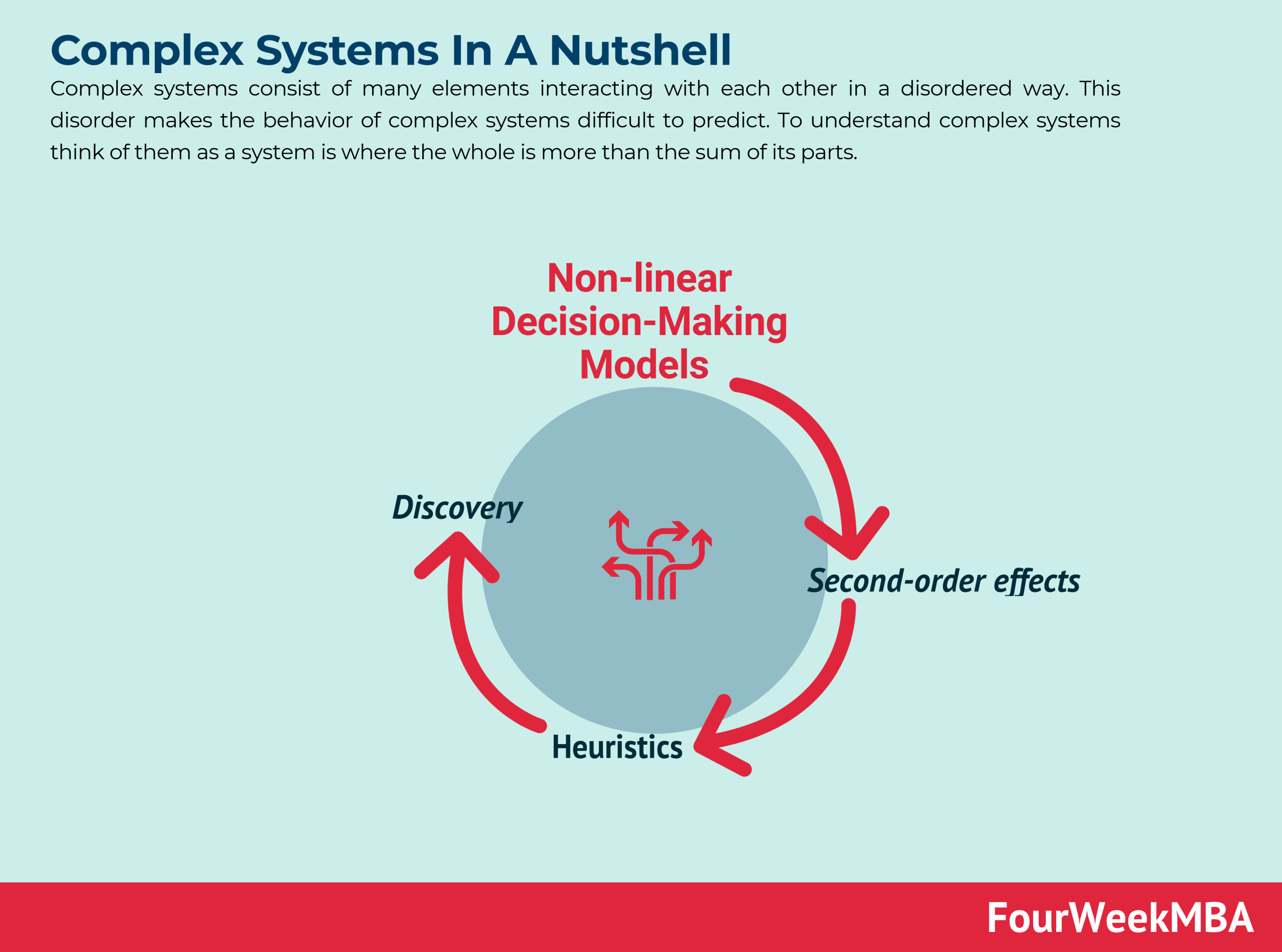 Complex systems consist of many elements interacting with each other in a disordered way. This disorder makes the behavior of complex systems difficult to predict. To understand complex systems think of them as a system is where the whole is more than the sum of its parts.

Complex systems comprise the very fabric of life itself. They are seen in the way birds organize themselves into flying formations and in the emergent structures of plants, snowflakes, and galaxies. Complex systems also describe the formation of human social networks and the communication patterns and social capital that form as a result.

Despite the prevalence of complex systems, researchers cannot agree on a concise definition and there has been relatively little scientific study into the topic. Perhaps the most accepted descriptor of a complex system is one with “wholes that are more than the sum of their parts.” Importantly, the behavior of these wholes cannot be predicted or explained without looking at the interaction between multiple, interconnected components.

Complex systems exhibit certain properties that arise from the dependencies and relationships existing between their constituent parts.

Some of these properties include:

Implications of complex systems for organizations

Now that we have defined the characteristics of complex systems, let’s take a look at the implications of complexity itself in an organizational context.

For organizations to succeed, Cilliers suggested it was the nature of interactions between employees that drive innovation and company culture.

Focusing on how people are proximally located and rethinking the way meetings are conducted should be prioritized over training individuals to be creative in isolation.

2 – Stable states are not desirable

While many organizations favor stability and certainty, the truth is they become stagnant and uncompetitive without continuous improvement and the embracing of change.

3 – No organization can be understood independently of its context

Cilliers acknowledges that vision and mission are important, but they can inadvertently define the imaginary boundaries of a comfort zone. Successful organizations interact with their broad environment, which includes other organizations.

4 – The history of an organization determines its nature

Two organizations with similar histories are not the same. The history of each is comprised of countless events and interactions distributed through the system. These interactions alone determine a unique evolutionary trajectory for both companies.

What’s more, decision-makers should never assume that a practice that works well in one context will do the same in another.

An undesirable characteristic may describe the plummeting sales in a previously popular product. Though the organization would prefer otherwise, it should not be surprised by emergence when it occurs.

By the same token, more desirable characteristics should not be suppressed or ignored simply because they were unexpected.

This means the organization should be prepared for the unexpected and not underestimate the potential impact of an insignificant event.

In a recent TED talk, entrepreneur and CEO Margaret Heffernan suggested companies transition from “just in time” to “just in case”. That is, the focus should switch from efficiency to resilience to counter the unpredictability of complex system outcomes.

Lastly, it is suggested organizations distribute control through their systems. Too often, managers tasked with making unpopular decisions are keen to offload the responsibility to others and decentralize control. But when the decision is considered a popular one, control is highly centralized.

As workplaces become increasingly autonomous, the opportunity for all employees to feel motivated and engaged in meaningful work is critical. To achieve this, they must be given some degree of decision-making power – or what we might call autonomy.