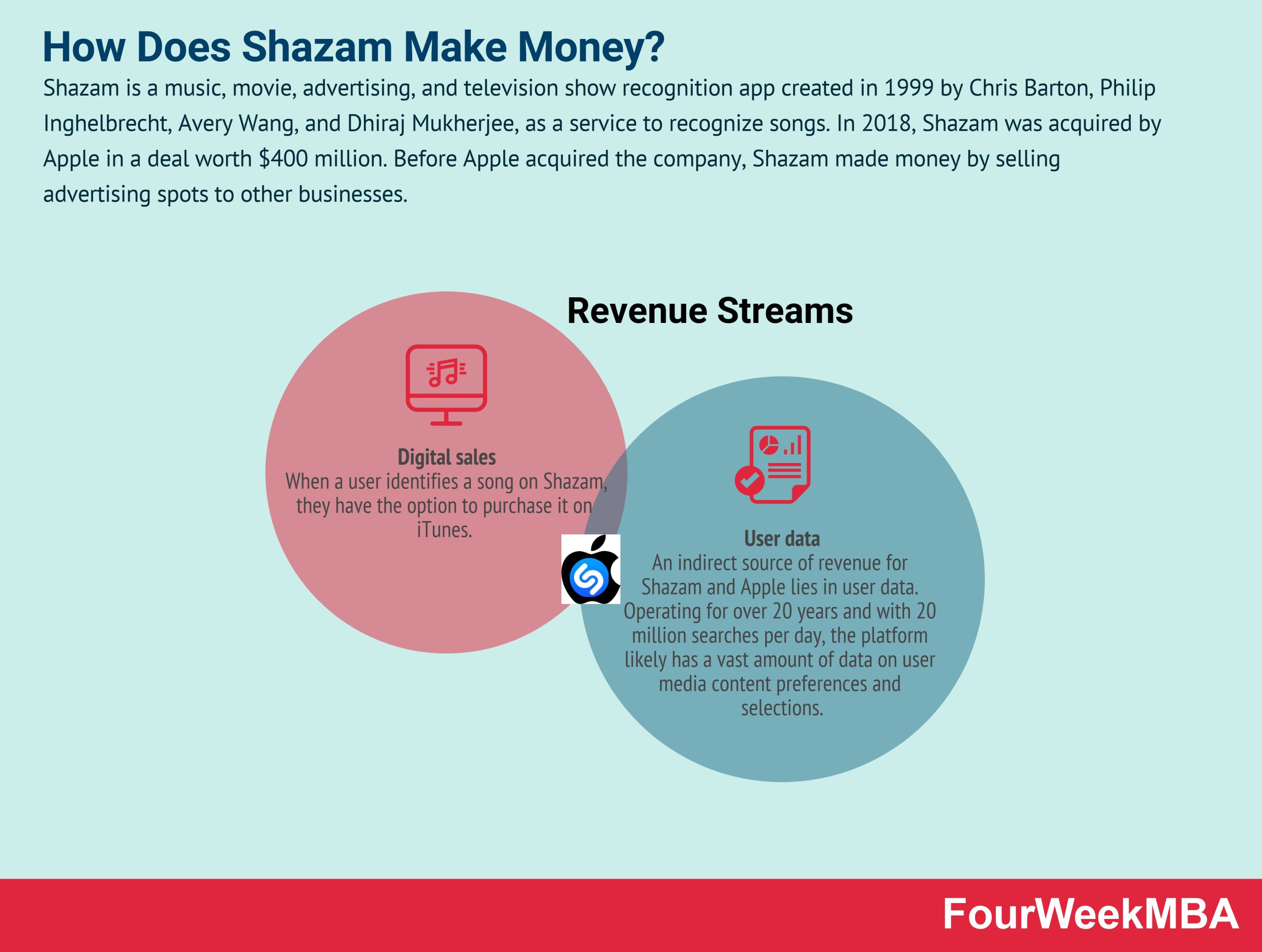 Shazam is a music, movie, advertising, and television show recognition app created in 1999 by Chris Barton, Philip Inghelbrecht, Avery Wang, and Dhiraj Mukherjee, as a service to recognize songs. In 2018, Shazam was acquired by Apple in a deal worth $400 million. Before Apple acquired the company, Shazam made money by selling advertising spots to other businesses.

It was created in 1999 by Chris Barton, Philip Inghelbrecht, Avery Wang, and Dhiraj Mukherjee. Smartphones and music services such as iTunes had yet to be invented, and Barton lamented that he could never recognize the songs he heard on the radio. With Mukherjee, he had the idea to partner with radio stations to identify songs on air and sell music to listeners.

Early versions of Shazam required users to call a number and hold the phone close to the radio to receive a text identifying the song. Shazam had over 1 million songs in its database by 2002, but a lack of technology meant song identification was slow and cumbersome.

Nevertheless, the founders tried various business models over the ensuing years. For a while, Shazam made money through reverse charge text messages. It also made deals with ringtone companies and mobile handset manufacturers. Venture funding then became difficult to source as the platform continued to grow in the wake of the dot-com recession.

Today, Shazam searches a database of approximately 30 million songs and can identify a track in around two seconds. The app can also handle remixes, cover-band versions, and background noise.

Before the company was acquired by Apple, Shazam made money by selling advertising spots to other businesses. It also offered a premium version of the app called Shazam Encore.

Advertising in particular was a significant source of income for the company, making it profitable for the first time in 14 years. Despite this, Apple decided to remove advertising from Shazam in late 2018. In 2020, the premium app was also made free.

So how does it make money? Read on to find out.

When a user identifies a song on Shazam, they have the option to purchase it on iTunes.

In 2016, Shazam gave users the option to play songs on Spotify and other streaming services. In fact, it was sending over 1 million visitors a day to third-party services and collecting hundreds of millions of dollars in digital sales.

After the Apple acquisition, the collection of referral fees became limited to iTunes. Revenue has probably also suffered because of the general decline in digital music purchases over the last decade.

An indirect source of revenue for Shazam and Apple lies in user data.

Operating for over 20 years and with 20 million searches per day, the platform likely has a vast amount of data on user media content preferences and selections.

How Apple plans to monetize this information is open to interpretation. It may for example use this data to determine what sort of content is produced for the Apple streaming service Apple TV.