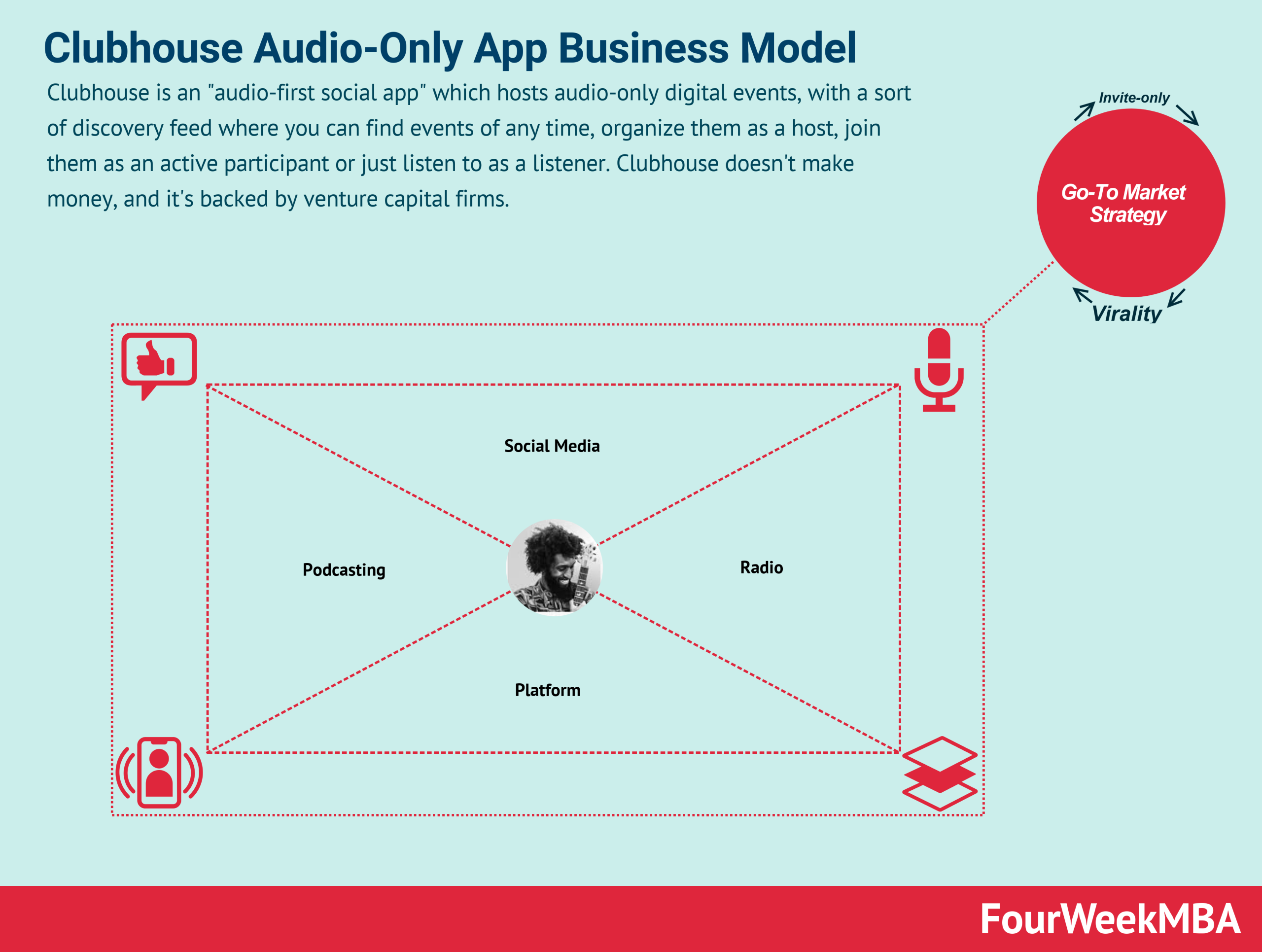 Clubhouse is an “audio-first social app” which hosts audio-only digital events, with a sort of discovery feed where you can find events of any time, organize them as a host, join them as an active participant or just listen to as a listener. Clubhouse doesn’t make money, and it’s backed by venture capital firms.

A quick look into Clubhouse

Clubhouse is an audio-based social media app. No texts, no video, no images, just audio. It feels like a podcast where multiple people are allowed to speak about a topic or have hangouts without the need to share pictures, videos, or texts – All interaction is audio-based.

At the same time the format of content looks more like a story, where the content is live and you won’t find it (as of now) in a recorded version. Thus, Clubhouse looks more like a modern version of radio, where though the social part is a key element.

People can freely form digital audio-rooms where the can talk about anything. Those virtual audio rooms, are managed by a few moderators working as hosts, some people can participate in the session by speaking up and many others can just join in to listen to the conversation.

According to the creators, “Clubhouse is a new type of social product based on voice [that] allows people everywhere to talk, tell stories, develop ideas, deepen friendships, and meet interesting new people around the world.”

A brief overview of Clubhouse

Although Clubhouse gained a lot of attention since the start of 2021, it was launched in April 2020.

However, due to the large amount of audio data being processed at a time, the app has been made an invite-only app, meaning that you cannot access the app unless you are invited. According to its developers, it is still at the beta testing stage, and the limits surrounding the app will be removed after a while.

The application is only available on iPhone currently, the android app is now being developed; upon completion, it’ll be launched with the full version of the app. Android users worldwide are way more than iPhone users; therefore, it makes sense to start with the iPhone since it is an invite-only platform.

Due to the policy of Clubhouse to control the number of active users on the platform, it was made an invite-only app, that is; anybody can download the app, but you cannot register unless you get an invite from your friend.

Every user is allocated one invite upon successful registration, although based on activity on the app, more invites are given to some people. Each person is responsible for everyone he invites to the app because every user has the details of the person who invited them on their profile. Hence, it is crucial that you only invite reasonable, responsible people that won’t soil your reputation publicly.

This has immensely helped control the crowd, fake accounts, unnecessary trolls and parodies because of the limited amount of invites, and nobody wants to invite a nuisance onto the app.

After launching the app, that takes you to the hallway, like a physical hallway where you wait for a meeting, just like “Explore” on Instagram or your “Timeline” on Twitter. So that is sort of an audio feed.

There are many rooms in the hallway, and you can join in public rooms that suit your interests just as you would join different threads of discussion on Reddit through numerous subreddits, like r/Ecommerce r/digital marketing and so on.

There are many such rooms on Clubhouse where thousands of conversations are going on. With more time on the app, you’ll get better room suggestions to join based on your preferences.

Unlike many social media apps that communicate through video or audio, the mode in Clubhouse is more organized.

Each room has a moderator, and each moderator can have a few co-moderators. Any person who wants to contribute has to “raise his hand” to get a recognition to speak; the moderators may as well turn off the option for raising hands temporarily until they wish to turn it on.

This helps to Improve organisation by permitting questions or additions only when needed, making it a very controlled space.

Clubhouse is a space where unlimited learning gets fostered. Due to the fact that you cannot get registered randomly, it makes it rare to have people who have nothing to contribute to the website, because users are very cautious of who they give invites to.

However, once the invite-only model has exausted we can expect Clubhouse to become as any other social media platform, with user-generated content as a primary format on the platform.

As of now, it gained traction quickly, thanks to its successful launch where it attracted high ranking individuals in the world – billionaires, icons in the tech space, digital marketing experts, celebrities, influencers, ex-CEOs of companies and many more men of substance are in these rooms, discussing their experiences and decisions with people and giving room for others to learn.

Oprah Winfrey, Kevin Hart, Chris Brown, Tiffany Haddish, Ashton Kutcher, and many celebrities in the entertainment space have been active on Clubhouse, having engaging discussions in the rooms. Even Elon Musk visited a Clubhouse room a few weeks ago, where he discussed and shared his views with the people in that room.

Clubhouse has proven to be a platform where knowledge can be boosted, by giving you the opportunity to be in discussions with people you won’t ordinarily have access to; learning from their vast experience and using it to boost your business.

If you are in a room where you don’t enjoy the discussions, you may “leave quietly.”

Clubhouse is a new social media platform, as such, it will find its sweet-spot in terms of commercial use cases. Let’s explore some of the ways now people are using Clubhouse for business.

Clubhouse may be used for business meetings. You can create a scheduled appointment with a date and a time, invite your colleagues to the room, and set a reminder for the conference, just like you would in Zoom or Google meets. People who are camera shy or more confident without a video may raise their points more efficiently when a business meeting is done via Clubhouse.

Finally, you can join several clubs in Clubhouse. Clubs on Clubhouse are a smaller community of people who interact and raise topics for discussion, just like a Facebook group. However, it is totally audio-based. Therefore, it is a subgroup where you can have personalized conversations.

You have a brief overview about Clubhouse, how to join, what Clubhouse is all about, and how it can serve as a personal and business development tool while facilitating connection with successful people; hence, boosting your business.

A new way of doing podcasting

Clubhouse does look like a podcasting platform. But it’s way more than that. It improved in a way toward podcasting because it added a social component (user-generated content and interactions) and a format that looks more like radio and stories.

A new format for digital events

For those involved in digital events Clubhouse is extremely interesting because it can be used as a new platform to build up an engaged community of users.

The rise of social radio platforms

Clubhouse looks a lot like the modern version of radio, with a strong component of social media. While radio, as a media, has been adapting to other formats like podcasting. Clubhouse brings that to the next level. A “social radio platform” that fully user-generated, with thousands of digital audio rooms and shows, where any show can be produced, from wider audience topics to niche and microniche level subtopics.

How does Clubhouse make money?

Clubhouse is still in the beta stage, and even though it has been already valued a billion dollars, it doesn’t make any money.

Andrew Chen, from venture capital firm a16z, which invested in the platform, explained:

The team has been building features to make it easier to moderate rooms and clubs, as well as working with creators to develop a business model that rewards the entire ecosystem as Clubhouse’s community grows. I love that this orientation contrasts with the typical ad-based business model that has supported social networks in the past. This centers the experience around community and quality, rather than clicks and volume.

Therefore, a16z is proposing alternative ways to monetize the platform that can be classified as below:

How can you make money on Clubhouse?

Just like on a social media, podcasting platform or radio you might be able to make money by organizing digital events and therefore via:

Clubhouse has gained traction quickly as an audio-only social app, working as invite-only in its beta version. It doesn’t monetize yet, but it might explore monetization strategies beyond advertising and more skewed toward enhancing a community of content creators (subscriptions, membership, and more).

Clubhouse is at the same time a radio platform, a social media platform, a podcasting platform, and a business networking app, and an entertainment app, where users can gather to discuss any topic of their choice.