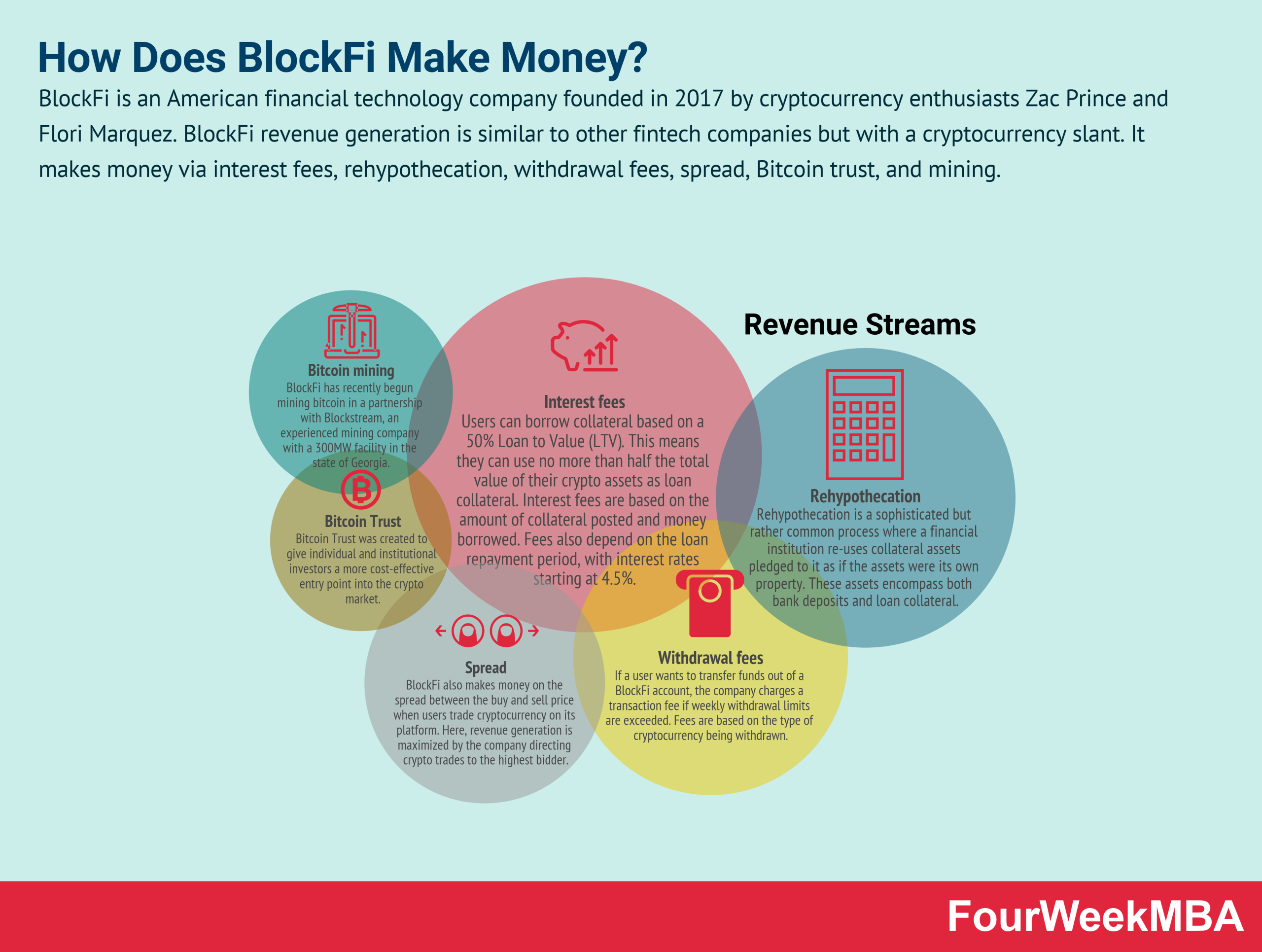 BlockFi is an American financial technology company founded in 2017 by cryptocurrency enthusiasts Zac Prince and Flori Marquez. BlockFi revenue generation is similar to other fintech companies but with a cryptocurrency slant. It makes money via interest fees, rehypothecation, withdrawal fees, spread, Bitcoin trust, and mining.

The idea for BlockFi came after both Prince and Marquez applied for loans and were not able to use their cryptocurrency assets as collateral.

”Despite the fact that they’re an investment of substantial value, I couldn’t use this asset as a financial tool and that really helped me realise how much work was still left to do in maturing crypto as an asset class”, Prince noted in a 2018 interview.

Initially, BlockFi positioned itself as a non-retail bank lender offering cryptocurrency-backed US dollar loans. This resulted in several benefits to consumers. For one, crypto enthusiasts could borrow cash without having to sell currency they believed would appreciate later. BlockFi also brought additional liquidity to borrowers who did not want to sell at depressed prices and catered to larger investors eager to borrow coins for short selling.

When the service launched in 2018, it was available in 35 states. A successful round of venture capital funding soon followed to the tune of $1.55 million. As one of the first such loan services, the company experienced rapid growth in the following years.

BlockFi revenue generation is similar to other fintech companies but with a cryptocurrency slant.

To see what we mean, continued reading to find out how the company makes its money.

As a loan provider, it is perhaps no surprise that the bulk of Blockfi revenue is earned via interest fees.

Users can borrow collateral based on a 50% Loan to Value (LTV). This means they can use no more than half the total value of their crypto assets as loan collateral.

Interest fees are based on the amount of collateral posted and money borrowed. Fees also depend on the loan repayment period, with interest rates starting at 4.5%.

Rehypothecation is a sophisticated but rather common process where a financial institution re-uses collateral assets pledged to it as if the assets were its own property. These assets encompass both bank deposits and loan collateral.

In some cases, BlockFi lends deposited cryptocurrency to other institutions to either collect interest fees or profit from price movement speculation.

If a user wants to transfer funds out of a BlockFi account, the company charges a transaction fee if weekly withdrawal limits are exceeded.

Fees are based on the type of cryptocurrency being withdrawn.

BlockFi also makes money on the spread between the buy and sell price when users trade cryptocurrency on its platform.

Here, revenue generation is maximized by the company directing crypto trades to the highest bidder.

Bitcoin Trust was created to give individual and institutional investors a more cost-effective entry point into the crypto market.

To accomplish this, BlockFi issues shares through private placements with the value of those shares equal to the value of bitcoin held by the trust.

As the trust sponsor, BlockFi charges a 1.75% sponsor fee of the total funds invested.

BlockFi has recently begun mining bitcoin in a partnership with Blockstream, an experienced mining company with a 300MW facility in the state of Georgia.

BlockFi generates income on the bitcoin it can mine. In all likelihood, a portion of mined bitcoin goes to Blockstream for providing the necessary infrastructure.