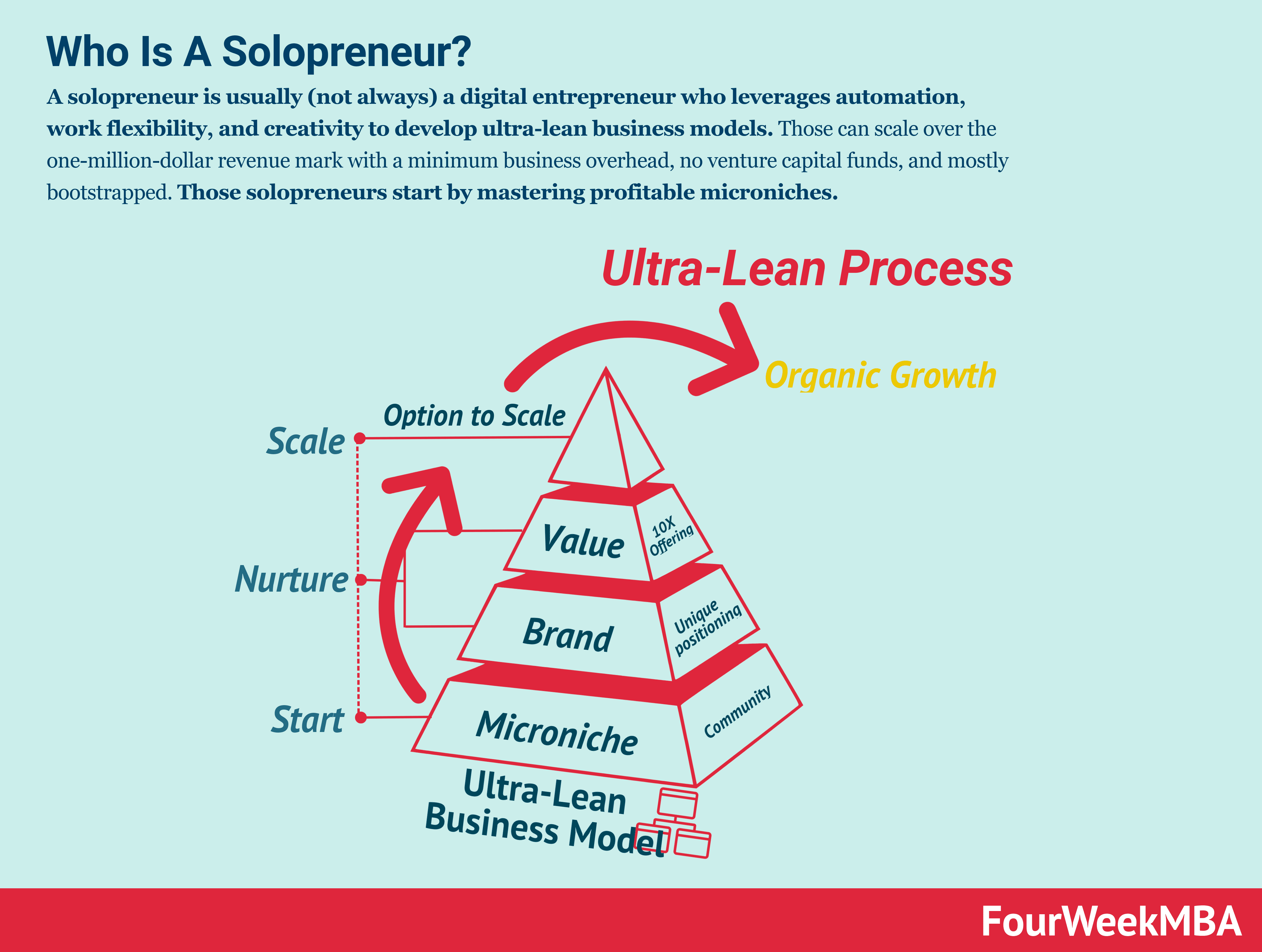 A solopreneur is usually (not always) a digital entrepreneur who leverages automation, work flexibility, and creativity to develop ultra-lean business models. Those can scale over the one-million-dollar revenue mark with a minimum business overhead, no venture capital funds, and mostly bootstrapped. Those solopreneurs start by mastering profitable microniches.

Clarifying the meaning of solopreneurship

In the business world the solopreneur is seen as the small business owner that does, from A to Z, all the functions and tasks the business requires to survive.

Yet a solopreneur doesn’t necessarily do everything on her own but instead focuses on devoting the whole focus on the most critical part of the business while contracting (if necessary) the remaining portion of the company.

Where the classic start-up entrepreneur (the Silicon Valley archetype) is about building a company with the grandiose vision of an exit. Either through venture capital acquisition or an IPO.

In many cases, the solo businesses will transition toward becoming a small company (like DuckDuckGo solo-business that turned out in a profitable and successful venture-backed business).

In other cases, the solopreneur might limit the growth of the company as a choice of freedom. In short, for the solo business isn’t just about money but also about the kind of business you might want to build.

The solopreneur approach might well be the opposite approach compared to the Silicon Valley-type serial entrepreneur, which primary aim is to build businesses that scale but that also requires a lot of maintenance and large employees’ base.

The solopreneur makes the opposite choice. Thus, let me recap in the following points how solopreneurs might differ from startuppers:

Related: Successful Types of Business Models You Need to Know

Rather than drafting a business plan, which is suited for those entrepreneurs looking for outside financial resources. The solopreneur has to look for simple tools to start and grow its potential business.

For the sake of it, using a business model, as a thinking tool, it can be way more effective, as in a page and in a few hours maximum, you can clear your mind.

Step two: It’s all about your Blue Sea and the Smallest Viable Audience

Once found the gap in the market, it is then crucial to niche down. In other words, you have to drill into that specific segment of the market until you find a potential target audience (from a few hundred up to several thousand people), which will be your manna.

Related: Microniche: The New Standard In The Era Of Dominating Digital Tech Giants

According to Tim Ferris, another way to look at it is to find a Muse by setting up in detail the TMI or target monthly income. Tim Ferris suggests thinking in detail about your monthly cash-flows.

In short, all the expenses that you are going to incur. Imagine, for instance, that you always dreamed of traveling the world. What does that mean? How many countries are you going to travel while setting-up your Muse? For how long will you stay in each country? How much would you pay off rent, travel, and living expenses?

It might sound complicated at first, but once you set this up, your goals will be much clearer. In fact, Tim Ferris makes your life easier by making a great tool available: The Monthy Expense Calculator.

In short, this tool tells you line by line what expenses to take into account. After you have to divide by 30 (to get the daily budget) and add a 30% buffer (you must be ready for any emergency).

Step four: Bootstrap your way through

The most important concept to understand is that of creating options to scale.

As you build a successful solo business you also create options to expand from a microniche to an adjacent space. You also have the option to look for a niche, before going fora whole industry.

Another option as the solo business grows the cash the business unlocks can be used to build or grow other businesses.

Bringing it all together

Read next: The Digital Entrepreneur’s Guide On How To Start A Business

What Is The Feynman Technique And Why It Matters In Business

The Feynman Technique is a mental model and strategy for learning something new and committing it to memory. It is...