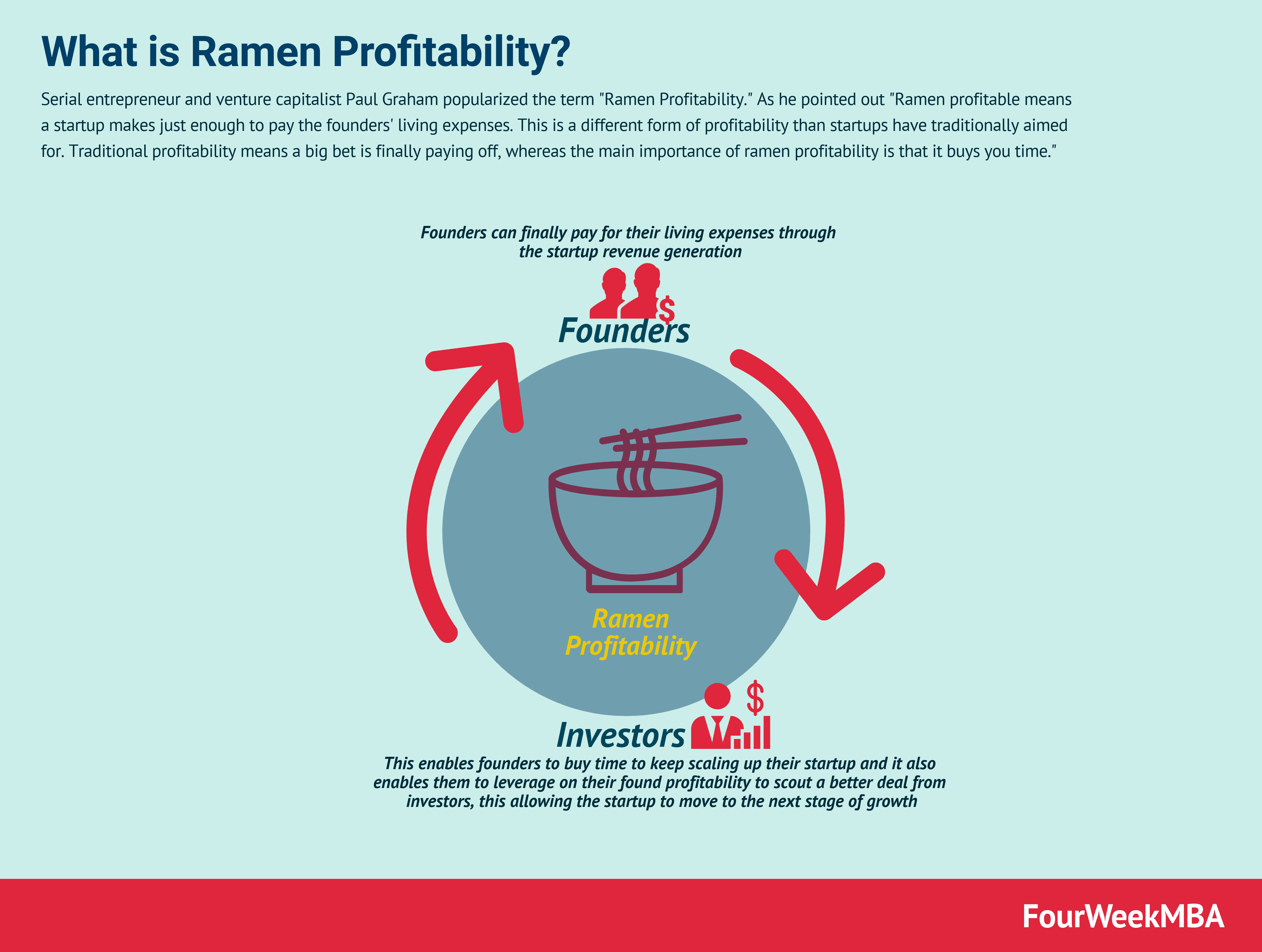 Let’s dive into this concept to see what it means and why it matters.

What is Ramen Profitability?

Ramen profitable means a startup makes just enough to pay the founders’ living expenses. This is a different form of profitability than startups have traditionally aimed for. Traditional profitability means a big bet is finally paying off, whereas the main importance of ramen profitability is that it buys you time.

Paul Graham uses the word “ramen” in “ramen profitable,” referring to instant ramens, one of the cheapest foods available. Thus, a first step toward the startup scalability.

That’s because it can finally pay off for the founders’ living expenses, thus making it become at least a real business. That also buys time to the startup to experiment with growth, product-market fit, venture capital funding to finance further tweaks to its business model.

Ramen Profitability as a survival mechanism

A startup that becomes profitable after 2 months, even though its revenues are only $3000 a month, because the only employees are a couple 25 year old founders who can live on practically nothing. Revenues of $3000 a month do not mean the company has succeeded. But it does share something with the one that’s profitable in the traditional way: they don’t need to raise money to survive.

Paul Graham points out that ramen profitability makes it possible for a startup to survive. That doesn’t guarantee success, but it does help the startup buy precious time to keep experimenting.

Why does Ramen Profitability matter?

The bimodal way of startups

A startup that reaches ramen profitability may be more likely to succeed than not. Which is pretty exciting, considering the bimodal distribution of outcomes in startups: you either fail or make a lot of money.

Paul Graham makes a good point here. In a more and more competitive business environment, building up a successful, scalable startup becomes a winner-take-all game. Where for many failed startups, a few make a lot of money. And if you’re on the way for ramen profitability that’s the crucial first step toward building a successful company.

Indeed, ramen profitability removes the dependency on investors’ money. Thus the paradox is that it makes it easier for founders’ to look for investments, by releasing the pressure. That’s because as Paul Graham points out, looking for investors’ money is itself a job that takes away the focus from building the startup.

It does not, for example, imply that you’re “bootstrapping” the startup—that you’re never going to take money from investors.

Ramen profitability doesn’t mean that a startup isn’t willing to take investors’ money, so to be in bootstrapping mode forever. Instead, it means it has enough means to be at least sustainable. The next stage is about scalability. To go toward scalability, a startup must avoid a trap that is common to many.

The trap of becoming a consulting company

Is there a downside to ramen profitability? Probably the biggest danger is that it might turn you into a consulting firm. Startups have to be product companies, in the sense of making a single thing that everyone uses.

A startup becomes truly valuable when it builds a scalable product, service, or platform that can tap into network effects. That is also why startups like Airbnb and tech companies like Amazon, Google, and Apple are valued many times over their revenues.

They have been able to build successful platforms able to match the interests of many stakeholders. That enables a startup to become scalable over time. The level of scalability is critical to the long-term value of that startup over time.

You can read the whole essay here.

Airbnb as the classic example of ramen profitability for startups

The most interesting example of ramen profitability when Brian Chesky, part of the Y Combinator accelerator, back in 2008 was followed by venture capitalist Paul Graham.

As Paul Graham pointed out in a piece “The Airbnbs:”

Ramen profitability is not, obviously, the end goal of any startup, but it’s the most important threshold on the way, because this is the point where you’re airborne. This is the point where you no longer need investors’ permission to continue existing. For the Airbnbs, ramen profitability was $4000 a month: $3500 for rent, and $500 for food. They taped this goal to the mirror in the bathroom of their apartment.

This made Airbnb’s co-founders focus on the hottest (most important) subset of the market for them, New York. As they narrowed down their market, suddenly numbers started to grow quickly and in a few weeks, they reached ramen profitability.

This was the initial journey of Airbnb.

A Guide To Disruptive Business Models With Thales Teixeira [Lecture]

For this interview, I have with me Thales Teixeira, professor at Harvard Business School and author of "Unlocking the Customer...