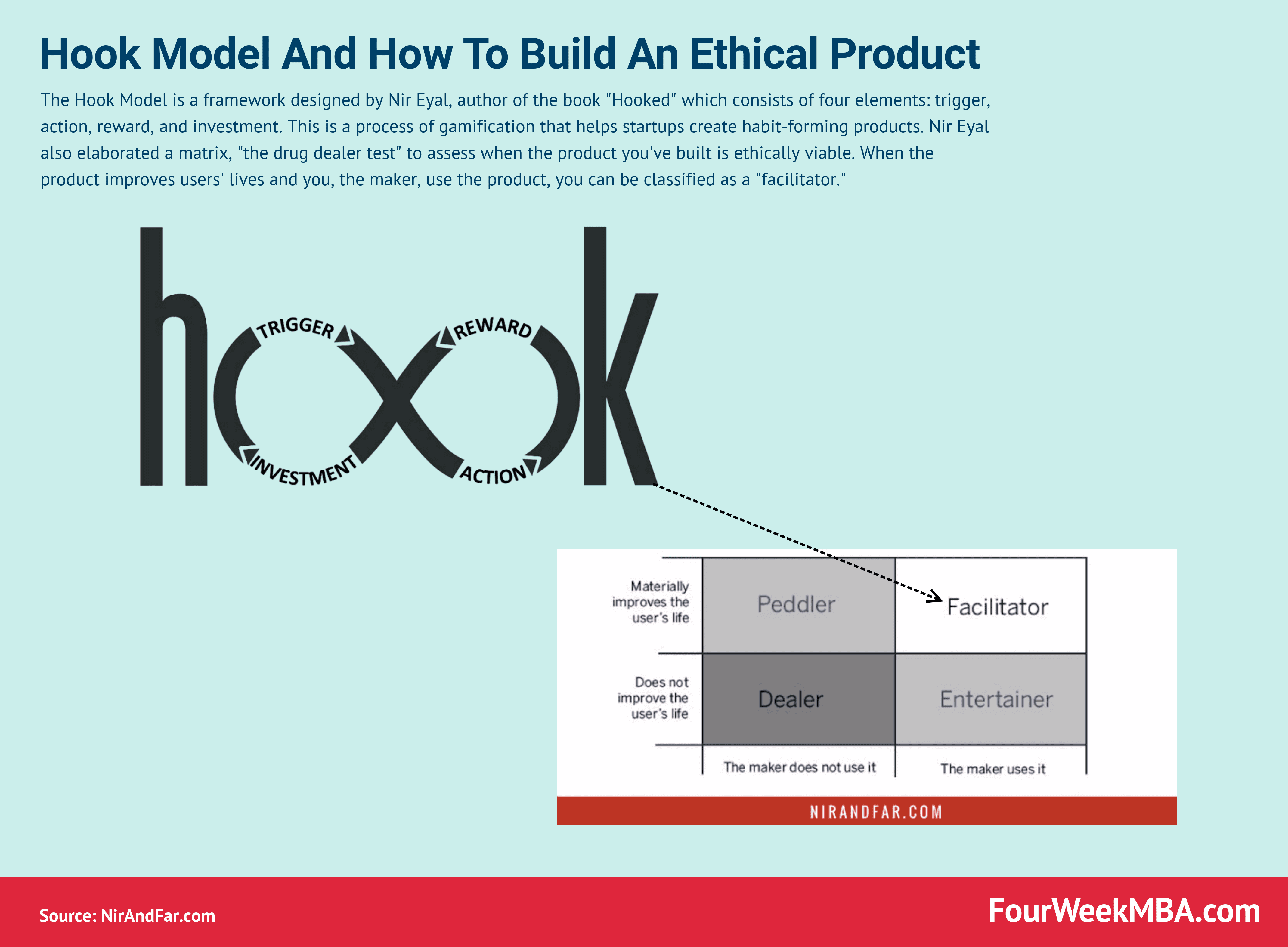 The Hook Model is a framework designed by Nir Eyal, author of the book “Hooked,” which consists of four elements: trigger, action, reward, and investment. This is a process of gamification that helps startups create habit-forming products.

As I dive into the startup world, I find out about a staggering truth. It isn’t a fight about power, prestige, or money. Instead, another currency that, as we progress, becomes more and more scarce is at the center of this battle. It is all about people’s attention.

That attention gets triggered and channeled by a set of hooks, that make the users wanting more in this fight over people’s attention.

The boundary between product development and people’s manipulation is thin. Thus, my dilemma is how to make sure we’re building an ethical product? Before finding the answer, let me give you a quick introduction to the Hook Model.

Instead of relying on expensive marketing, habit-forming companies link their services to the users’ daily routines and emotions. ― Nir Eyal, Hooked: How to Build Habit-Forming Products

For anyone running a startup, the Hook Model is one of those frameworks you must keep on top of your mind. A four-step framework, from the trigger to investment and back to trigger. The user builds a habit that makes her wanting more and more of that product.

The core of making a product habit-forming is its variable reward. In short, our brain expects a reward, and it prepares for it. Yet after meeting the expected reward if the user finds an additional unexpected reward it gets almost hooked.

Before the user leaves, it is time to ask for investment regarding time, data, effort, social capital, or money.

Big companies all over the world; from Facebook to LinkedIn, hooked us, and we can’t live without their services.

Therefore the model is so powerful that it brings up a few questions on what is the proper way of using it.

Indeed, with such a robust framework, how do we make sure to use it for good? Nir Eyal proposes the drug dealer test.

Ethics: A Problem as Old as Humankind

Bad people…are in conflict with themselves; they desire one thing and will another, like the incontinent who choose harmful pleasures instead of what they themselves believe to be good. ― Aristotle, Nicomachean Ethics

Ethics is not an easy issue. Deriving from the Greek ἦθος, meaning habit, custom. Ethics is an attempt to discern between good and evil, right or wrong. In other words, to define what are the absolute human values that should be part of anyone’s life.

Per se, this approach is utopian and doomed to failure. Things are often shaded. They’re neither right nor wrong on their own. Instead, based on context, perspective, and cultural norms, most of the human behaviors are goal-driven.

Also, ethics is the byproduct of human cultural evolution. What was right in the past it is considered as unjust nowadays.

We have reasons to believe that what we deem right today will be regarded as wrong tomorrow. How do we solve this impasse?

Rather than focusing on theoretical differences and definitions, we could use a much simpler approach.

For instance, in the startup world, we could define ethics as a process. That process leverages on unconscious clues and hooks. But it also should bring towards conscious behaviors.

The final aim is to improve the user mental well-being. In short, those hooks should be accompanied by a strong ethical understanding.

In this respect, Nir Eyal proposes an interesting framework.

As Nir Eyal explains the first rule of drug dealing is “never get high on your own supply.” If you want to build an ethical product, you have to break this rule!

Indeed, the Manipulation Matrix is a two questions quadrant to assess whether the product you’re building is ethnically manipulative. The first question, “Do you believe that the product or service you’re working on is materially improving people’s lives?”

The second question, “am I the user?”

“Yes,” puts you in the facilitator quadrant.

“No” makes you as the entertainer.

According to Nir Eyal, the companies that are successful at building ethical habit-forming product are those which founders turned out to be also facilitators. From Google to Facebook, Slack, or Whatsapp.

Of course, as those companies scaled up, it’s hard to keep this distinction in mind, but it’s a good place to start to understand how to counterbalance a powerful framework like the Hook Model, with ethical check and balances.

Are you a dealer or a facilitator?