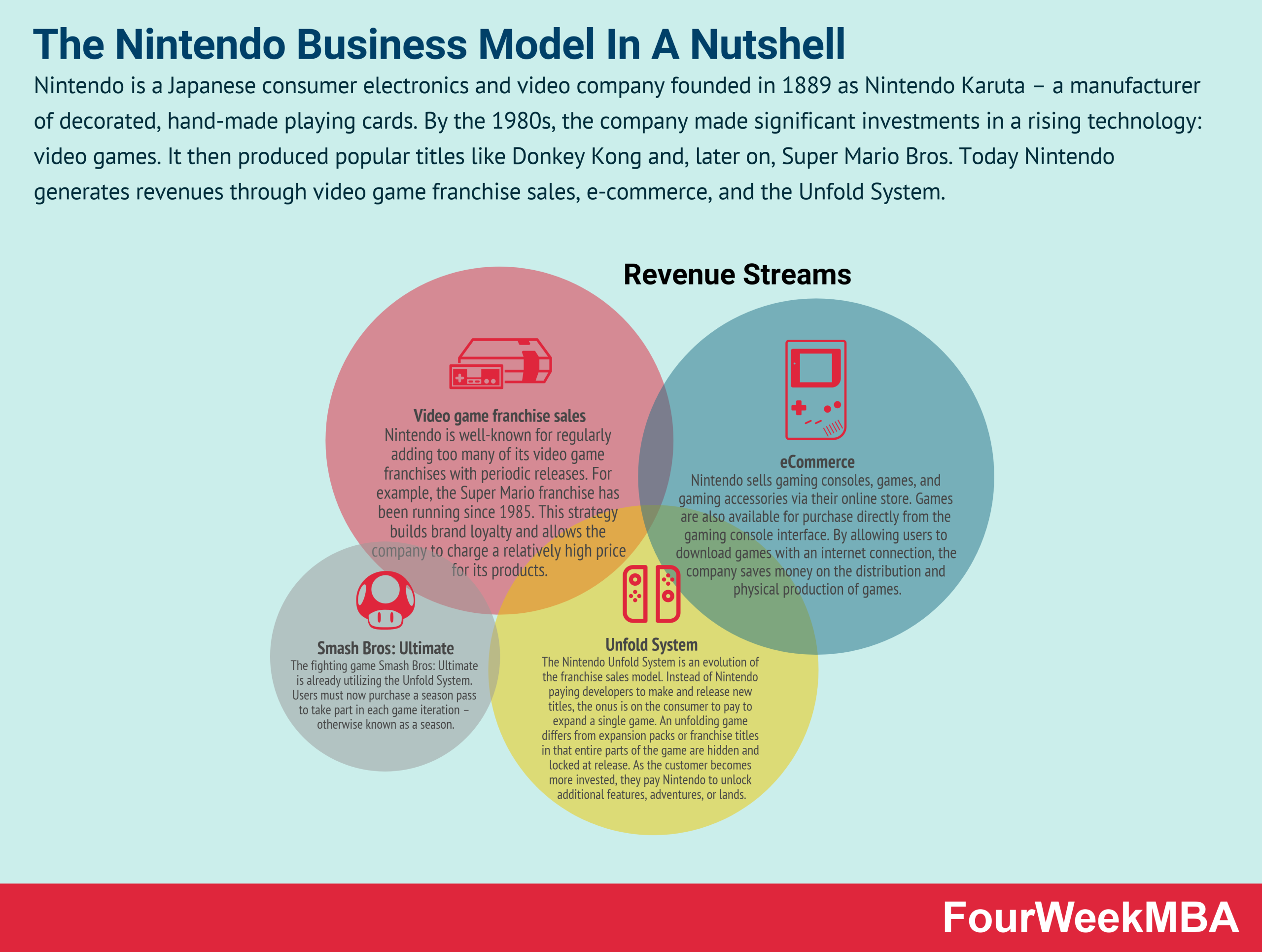 Nintendo is a Japanese consumer electronics and video company founded in 1889 as Nintendo Karuta – a manufacturer of decorated, hand-made playing cards. By the 1980s, the company made significant investments in a rising technology: video games. It then produced popular titles like Donkey Kong and, later on, Super Mario Bros. Today Nintendo generates revenues through video game franchise sales, e-commerce, and the Unfold System.

Nintendo is a Japanese consumer electronics and video company headquartered in Kyoto, Japan.

The company was founded in 1889 as Nintendo Karuta – a manufacturer of decorated, hand-made playing cards. Nintendo would produce these cards for over seven decades, but sales fell after the cards became associated with gambling and Japanese organized crime.

In 1950, 22-year-old Hiroshi Yamauchi took control over Nintendo and expanded the product range to include toys and amusement arcades. Over twenty years later, Yamauchi made a significant investment in an emerging technology: video games. The popular title Donkey Kong was released in 1980, catapulting the company to the global stage.

The even more successful Super Mario Bros. was released five years later, named after the landlord who owned Nintendo’s American headquarters. The success of the game was nicely complemented by the release of the Game Boy in 1989, the first handheld electronic game console. This pioneering success has been built upon with the subsequent releases of consoles including the Super Nintendo Entertainment System, Nintendo 64, Nintendo DS, GameCube, Wii, and Nintendo Switch.

Today, the company continues to be an innovative player in gaming and consumer electronics. Profits in 2020 were 376.6 billion JPY, or approximately $3.6 billion.

Let’s take a look at how this plays out for Nintendo.

Nintendo is well-known for regularly adding too many of its video game franchises with periodic releases. For example, the Super Mario franchise has been running since 1985.

This strategy builds brand loyalty and allows the company to charge a relatively high price for its products.

Games are also available for purchase directly from the gaming console interface. By allowing users to download games with an internet connection, the company saves money on the distribution and physical production of games.

The Nintendo Unfold System is an evolution of the franchise sales model.

Instead of Nintendo paying developers to make and release new titles, the onus is on the consumer to pay to expand a single game. An unfolding game differs from expansion packs or franchise titles in that entire parts of the game are hidden and locked at release. As the customer becomes more invested, they pay Nintendo to unlock additional features, adventures, or lands.

For the company, this is seen as a far less risky strategy than franchising. Rather than building a new game on the same platform as the existing game, Nintendo simply keeps the existing base and charges the customer for any new features it develops.

In theory, the Unfold System expansion method can be used indefinitely. Games may have no endpoint and a new version may only be necessitated by a console upgrade.

The fighting game Smash Bros: Ultimate is already utilizing the Unfold System. Users must now purchase a season pass to take part in each game iteration – otherwise known as a season.

Pokémon – which Nintendo owns a 32% stake in – has also added new lands and adventures using this revenue strategy.