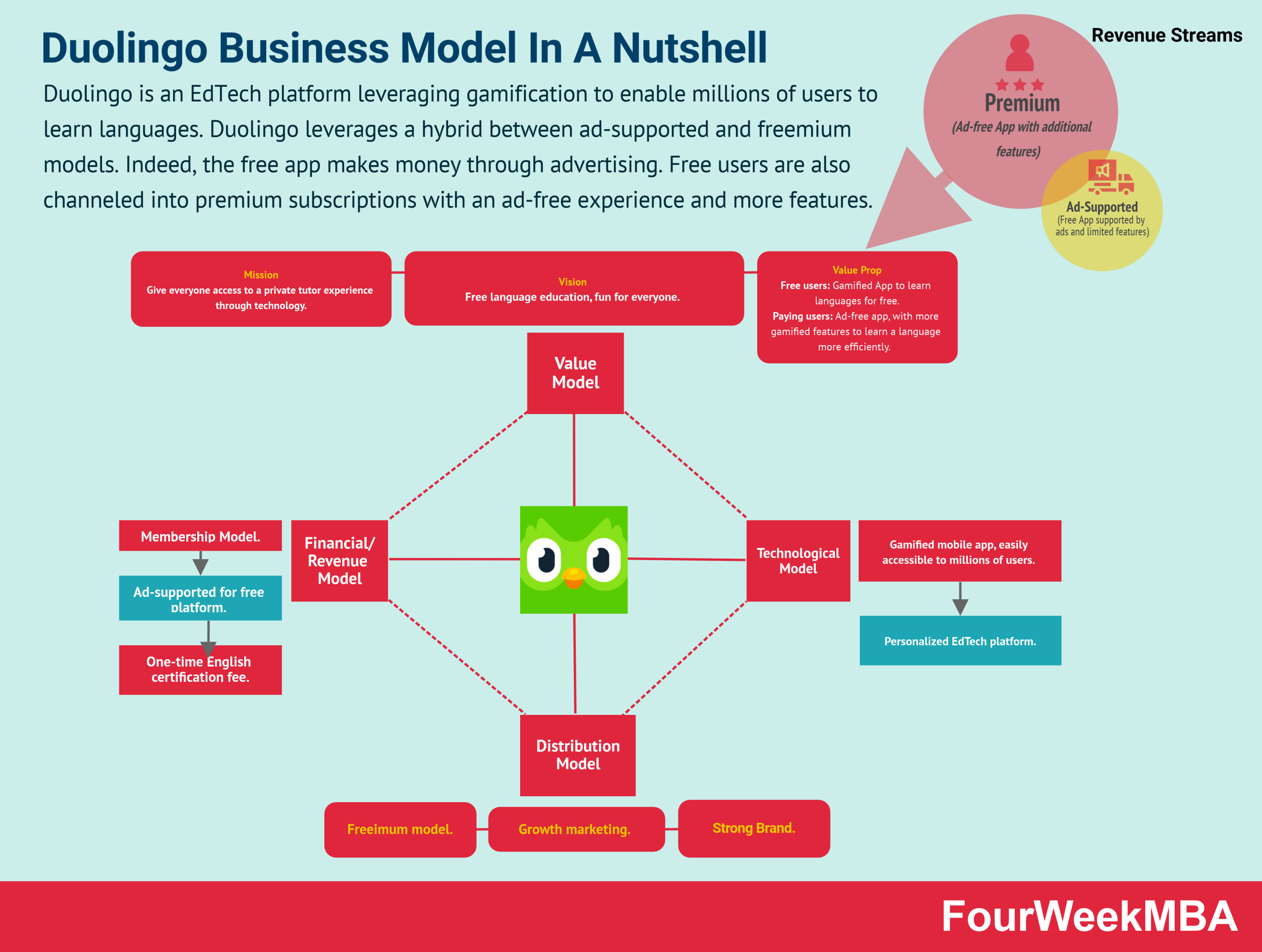 Duolingo is an EdTech platform leveraging gamification to enable millions of users to learn languages. Duolingo leverages a hybrid between ad-supported and freemium models. Indeed, the free app makes money through advertising. Free users are also channeled into premium subscriptions with an ad-free experience and more features.

Duolingo is a language education platform that has become one of the most popular ways to learn a language online. It was created by Luis von Ahn, who also developed CAPTCHA, reCAPTCHA, and the Google Image Labeller.

Indeed, it is the reCAPTCHA model that provides the basis for Duolingo. The model is used to digitize books through CAPTCHA forms and crowdsourcing to translate key words or phrases not understood by computers. Duolingo works similarly. While learning a new language, its users are in fact translating actual website content. When multiple users give the same translation for a particular sentence, Duolingo considers it to be a legitimate translation and saves it accordingly.

Valued at close to $1.5 billion, Duolingo employs a gamification process across 40 different language courses to increase learner engagement. It boasts a registered user base of 500 million people, with 42 million of those using the application on a regular monthly basis.

During the initial years of the company, Duolingo sold language translation services to customers such as CNN and BuzzFeed.

In 2017, the app pivoted toward a freemium model with revenue generated exclusively by advertisement impressions.

At $6.99/month, users can also upgrade to the ad-free Duolingo Plus which delivers several other perks:

In 2019, projected revenue for Duolingo Plus alone was $84 million spread across 1 million-plus users.

For those learning English as a second language or wanting to enter a U.S. college, the app also offers English certification for a one-time fee of $49. The Duolingo exam is substantially cheaper than other proficiency tests that can cost as much as $200.

This type of documented English-language proficiency has become particularly popular in the wake of the COVID-19 pandemic, as many countries have been forced to close their learning institutions. The scheme has enjoyed a 1500% year-over-year growth since it was introduced.

von Ahn recognizes the difficulties associated with monetizing content that is given away for free. This has skewed Duolingo’s revenue generation model, with 80% of earnings coming from just 4% of its users (its power users).

To that end, Duolingo hopes to be able to replicate the Spotify model of subscriber monetization. The company will look to increase the number of downloads of its app and convert more customers onto paid plans by adding new features.

While the free version is important to schools, universities, and the poor, von Ahn argues that it has a bigger role to play. He makes comparisons between Duolingo and a younger Spotify, where the latter used its free version to increase word-of-mouth advertising and get more people engaged with the paid offering.