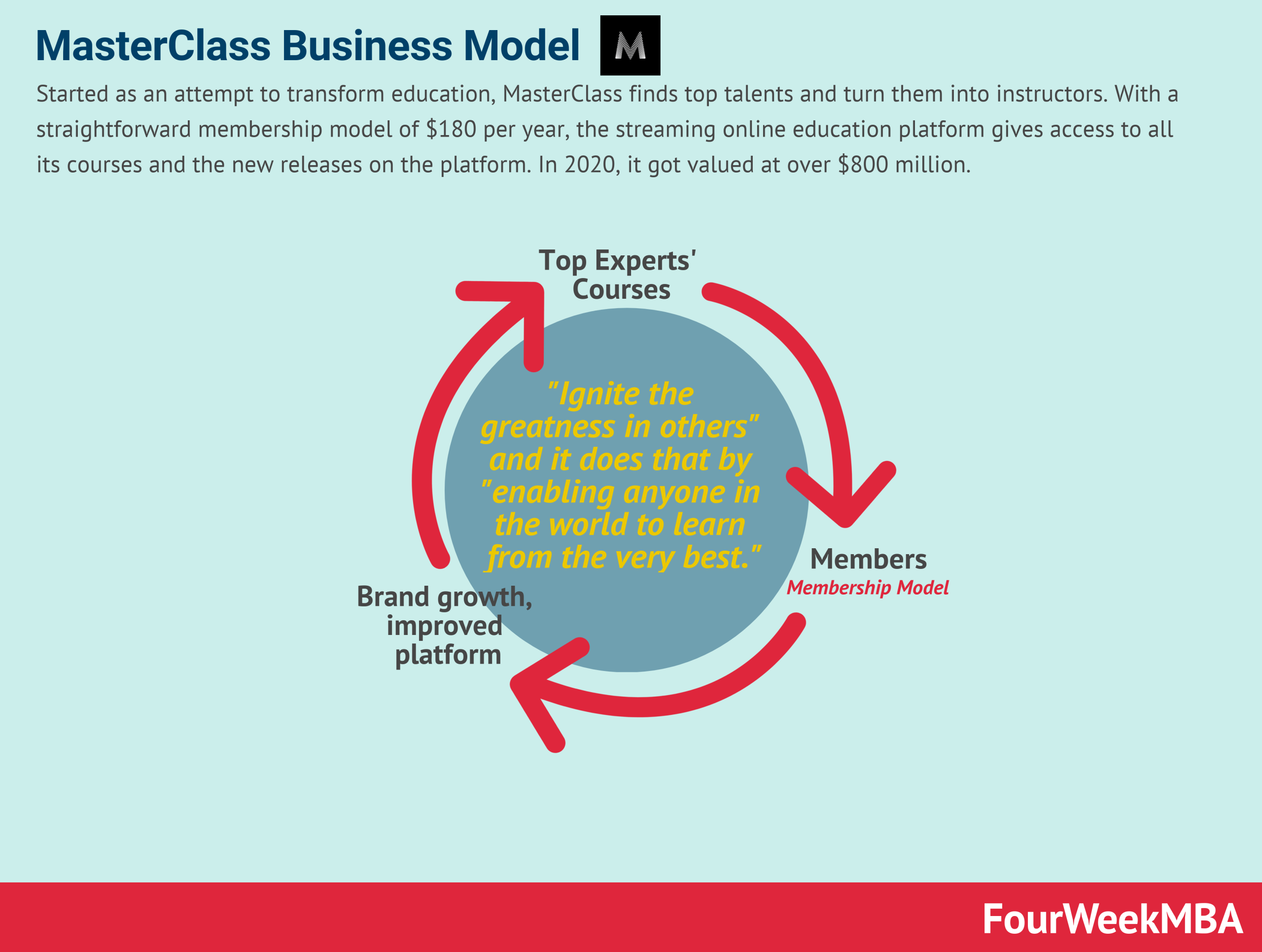 Started as an attempt to transform education, MasterClass finds top talents and turn them into instructors. With a straightforward membership model of $180 per year, the streaming online education platform gives access to all its courses and the new releases on the platform. In 2020, it got valued at over $800 million.

In an interview for 7×7 Aaron Rasmussen and David Rogier, highlighted their feelings about the education world:

I had been speaking with people in education, both in and outside the traditional school system, and found that people felt they were getting ripped off.

From there they started to redefine the concept of educaiton. During the web era, several companies have approached the change in education is several ways. MasterClass philosophy was that of enabling top talents to bcome instructors.

As they pointed out in the same interiew:

What does the most ideal online education look like? Learning from well-known instructors who have mastered a particular skill on one seamless platform. We’ve been working on MasterClass ever since!

So how did they convince the first celebrities to produce a class on their platform, when none knew them? David Rogier explained: “Honestly, lots of cold calling, persistence, great advisors and a little bit of luck.”

They also used some of the connections they had but as the founders reported the key ingredient was timing and the willingness of the top-class expert to wanting. todo it.

For instance, David Rogier reported how Kevin Space said he felt like it was his responsibility to “send the elevator down” for the next generation of actors.”

Of course, it helped the fact that, after initial traction, MsterClass also got well funded. Which definitely helped convince top experts to join the platform. As Hollywood Reported explained, “instructors make about $100,000 upfront when they begin working with MasterClass and receive 30 percent of the revenue their classes generate.“

This was back in 2017 when the platform was still at the beginnings. We can imagine that depending on the instructor and celebrity MasterClass has several levels of deals, to make it attractive for them to contribute a course on the platform.

David Rogier highlighted on Quora that when they were launching, to reduce the risk of failure, or perhaps to avoid spending years of their life and massive financial resources, they went through a process of idea validation, which consisted in asnwering four questions.

Those for questions can be used really, as a sort of business model framework to launch the business:

MasterClass’s mission is “to ignite the greatness in others” and it does that by “enabling anyone in the world to learn from the very best.”

MasterClass philosophy and strategy is skewed toward finding the top talents in several areas and transform them in instructors for the masses, where the educational experience is kept as much as possible as “one-to-one” meaning MasterClass tries to make it interactive via developing also online tools that help students learn better.

For instance, at once Rogier recounted how when developing the course with Christina Aguilera they had the chance to develop a proprietary technology to evaluate and measure the pitch of the voice, thus practice during the course.

How does MasterClass make money?

MasterClass is a streaming platform, that has a simple membership revenue model. The annual membership is $180 per year and provides unlimited access to all classes and new classes as they launch with a 30-day free trial.

Given the new funding round in 2020, the company might be worth more than $800 million.