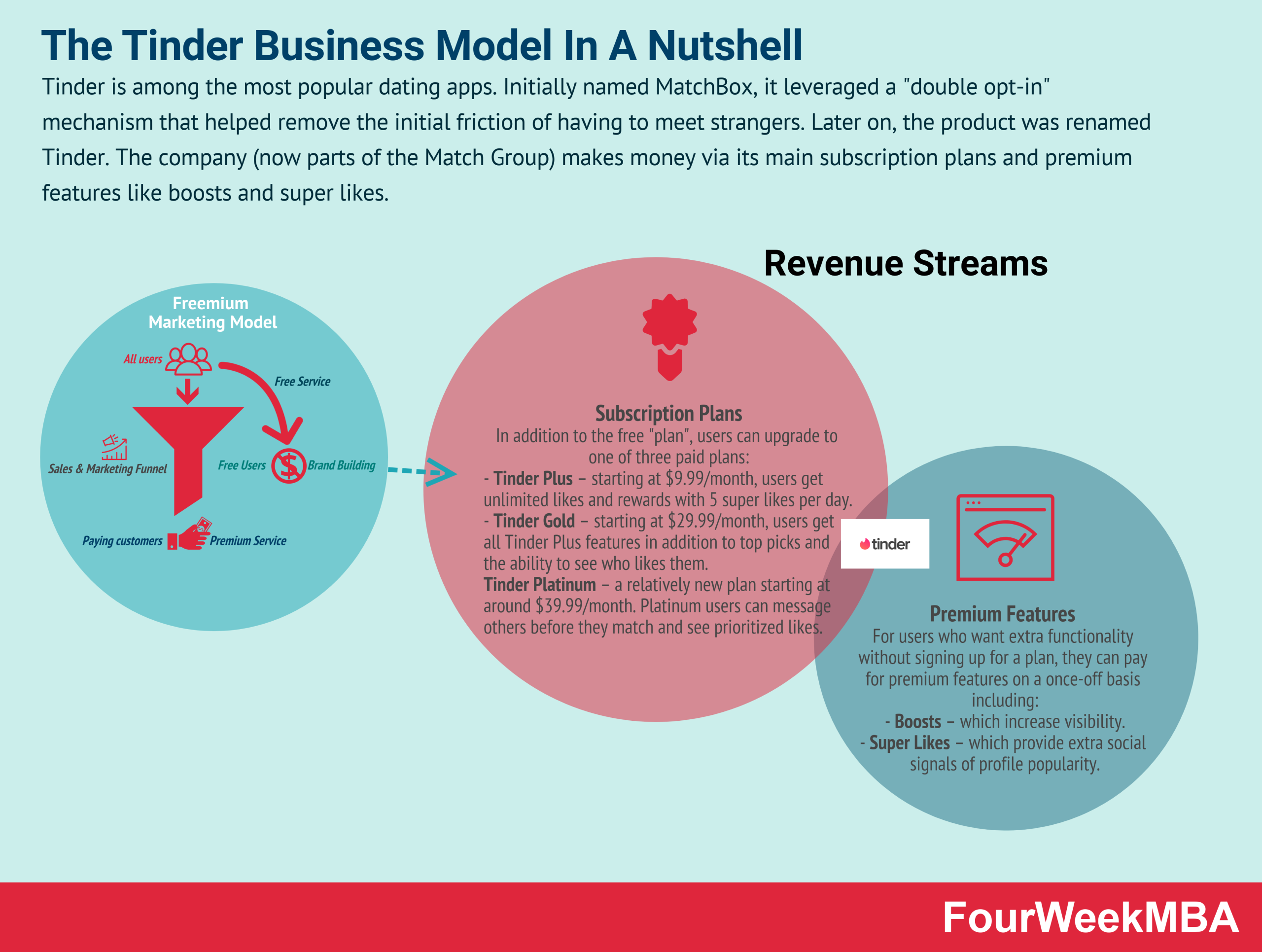 Tinder is among the most popular dating apps. Initially named MatchBox, it leveraged a “double opt-in” mechanism that helped remove the initial friction of having to meet strangers. Later on, the product was renamed Tinder. The company (now parts of the Match Group) makes money via its main subscription plans and premium features like boosts and super likes.

Tinder is a North American online networking and dating application.

The prototype for the app, named MatchBox, was created at start-up incubator Hatch Labs by Sean Rad and Justin Mateen. Rad had identified an absence of platforms allowing users to meet each other and noted that a “double opt-in” system could alleviate the stress of interacting with strangers.

Six months after creation, the prototype was renamed Tinder to match the flame logo designed by eventual CCO Chris Gulczynski. Then began an aggressive marketing campaign, which involved launching the app at multiple college campuses. By 2014, there were over 1 billion swipes per day equating to 12 million matches.

Tinder became a part of Match Group in 2017, a portfolio of popular online dating services including OkCupid, Meetic, Match.com, and PlentyOfFish. As of Q4 2020, Tinder had 6.7 million paid subscribers, with almost 1 in 5 adults in the United States having used the service.

Tinder operates on a freemium model of revenue generation.

The app is free to use, but Tinder subscribers can pay for a variety of added features and functionality. Let’s take a look at them below.

In addition to the free “plan”, users can upgrade to one of three paid plans:

Prices for each plan vary according to geographic location and market, particularly if the company is beta-testing new features. Like many subscription services, a cheaper price can be obtained by paying six-monthly or annually. For example, the cost of the Tinder Plus plan drops from $9.99 to $4.17 per month if paying yearly.

Prices are also dependent on age, which has attracted some controversy. Users over 30 years of age are generally charged much more for equivalent service than those under 30. Anecdotal evidence suggests that price is also dependent on geographic location and sexual orientation.

For users who want extra functionality without signing up for a plan, they can pay for premium features on a once-off basis including:

Again, prices are dependent on the abovementioned factors and cheaper prices can be had if purchased in bulk.