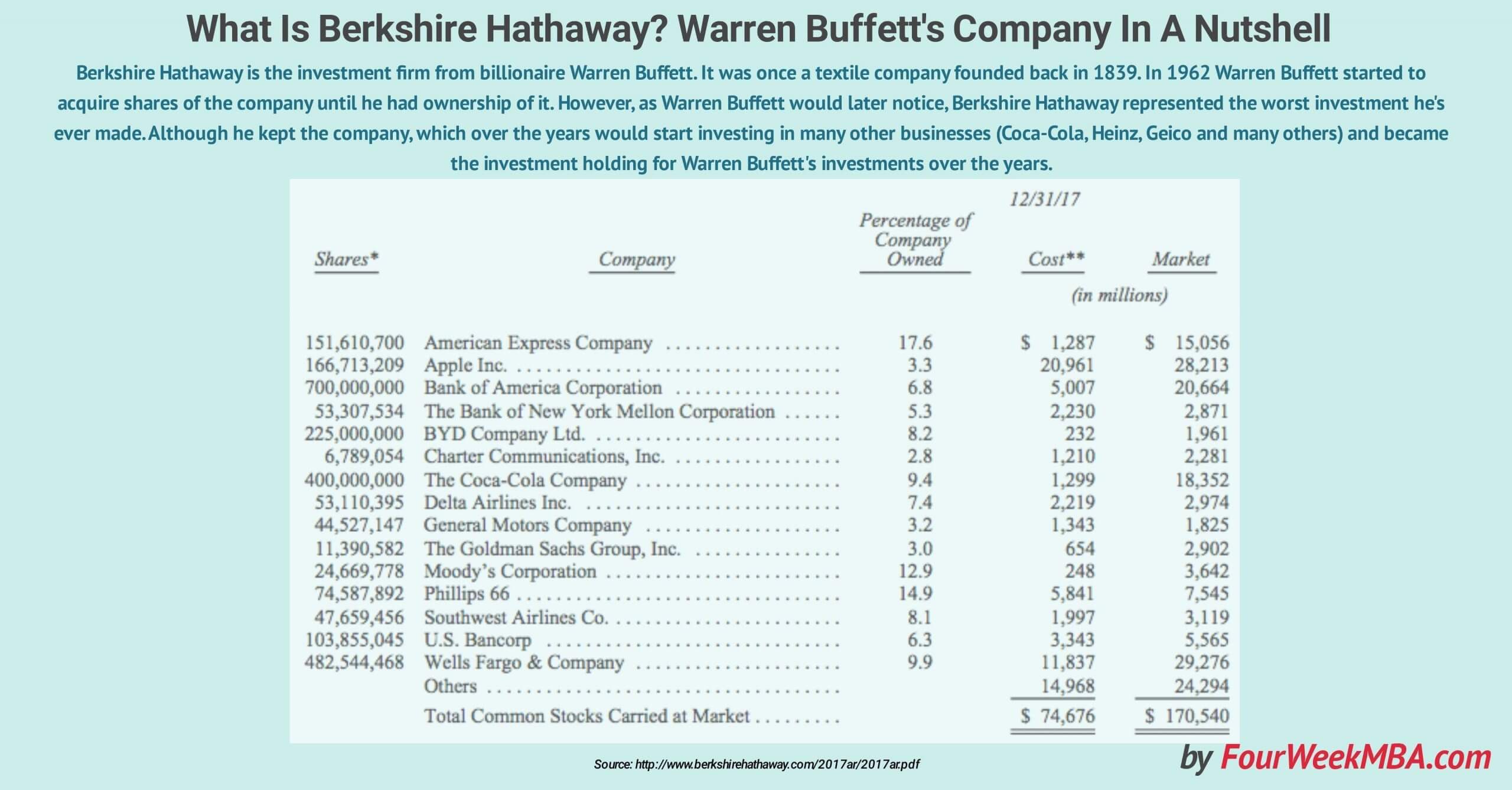 In his words, in the CNBC interview, Warren Buffet noted “It was early in— 1962, and I was running a small partnership, about seven million. They’d call it a hedge fund now.“

As the story goes, Warren Buffett was ready for a tender offer which he agreed with the management. Yet that agreement was not respected, which made Warren Buffet angry until taken aback from the anger he acquired the control of the company and fired the man – Mr. Stanton – to whom he had agreed on the tender offer for Berkshire Hathaway.

Since he had committed most the investing money in Berkshire Hathaway, Mr. Buffett kept holding at it. In the meanwhile, he also entered the insurance business, within the next twenty years. In short, Berkshire Hathaway became a burden that would never scroll from Warren Buffett‘s shoulder, not just from a philosophical standpoint. But instead from a financial perspective.

As reported by Warren Buffett had he entered directly the insurance business, rather than the textile, based on compounding earnings Warren Buffett would have earned $200 billion more. Of course, talking at conditional is not a good investment strategy.

The paradox is that Berkshire Hathaway, Warren Buffett‘s first and worst investment also stuck as the name of the investment company that later in the years would acquire brands like Coca-Cola, Geico, Goldman Sachs, Apple and many others.

While as individual shareholders Warren Buffett is the one who owns more than 5% of Berkshire Hathaway class A stocks. At the institutional level, Blackrock owns 7.7% of the company and The Vanguard Group has 9.2% of the company, both in class B stocks and State Street Corporation owns about 6.3%. Those ownership percentages are as of March 2018.

If you look at the shareholders for Berkshire Hathaway, you might notice how Warren Buffett, between Class A and Class B stocks, might have voting power for more than 50%. However, as reported on the Proxy statement, “Mr. Buffett has entered into a voting agreement with Berkshire providing that, should the combined voting power of Berkshire shares as to which Mr. Buffett has or shares voting, and investment power exceed 49.9% of Berkshire’s total voting power, he will vote those shares in excess of that percentage proportionately with votes of the other Berkshire shareholders.

Berkshire Hathaway stocks: Class A vs. Class B

When a company decides to issue equity in the form of common shares, it can do so in several types depending on the limitations that the owners of the company want to give to voting powers and also in terms of ownership. In short, a Class B stock might be worth more Class A stocks.

Class B Stock is entitled to one-ten-thousandth (1/10,000) of one vote per share on all matters submitted to a vote of shareholders of the Corporation.

What salary do Warren Buffett and Charlie Munger get?

Warren Buffett and Charlie Munger get a salary of $100,000 per year. This is a base salary, as they don’t take bonuses or any other form of compensation.

From the table, you can see how today Berkshire Hathaway is a well-diversified business that owns companies like American Express, Apple, Bank of America, Coca-Cola, Goldman Sachs, Moody’s, Heinz (not reported here) and many other brands. Among the most successful investments, there is Coca-Cola, which Warren Buffett started to buy back in 1988, until in 2017 that amounted to 9.4% shares of the company.

If you follow Warren Buffett, you know how his aversions for tech companies. Yet starting 2016 he started acquiring Apple Inc. stocks.

One of the most important principles that drive Warren Buffett investing is about his circle of competence. Indeed, that implies to invest in companies he can understand. Thus, technology firms have not been in Warren Buffett‘s radar for that simple reason. However, it seems that back in 2016 and still in 2018 Warren Buffett has been racking up stocks of Apple. In an interview for CNBC, he said: “Apple strikes me as having quite a sticky product and an enormously useful product to people that use it, not that I do.”

As specified by Warren Buffett in the 2017 annual report “Some of the stocks in the table are the responsibility of either Todd Combs or Ted Weschler, who work with me in managing Berkshire’s investments. Each, independently of me, manages more than $12 billion; I usually learn about decisions they have made by looking at monthly portfolio summaries. Included in the $25 billion that the two manage is more than $8 billion of pension trust assets of certain Berkshire subsidiaries. As noted, pension investments are not included in the preceding tabulation of Berkshire holdings.”

One of the essential principles of value investing, which is Warren Buffett methodology to stock investing is to ignore Mr. Market. The value investor looks at the company fundamental and ignores market fluctuations and the noise made by media. As specified by Warren Buffett in Berkshire Hathaway 2017 annual report “Charlie [referring to his life-long partner Charlie Munger] and I view the marketable common stocks that Berkshire owns as interests in businesses, not as ticker symbols to be bought or sold based on their “chart” patterns, the “target” prices of analysts or the opinions of media pundits. Instead, we simply believe that if the businesses of the investees are successful (as we believe most will be), our investments will be successful as well. Sometimes the payoffs to us will be modest; occasionally the cash register will ring loudly. And sometimes I will make expensive mistakes. Overall – and over time – we should get decent results. In America, equity investors have the wind at their back.”

Has Berkshire Hathaway always been successful?

As a company that made its success with stock investing. Also for Berkshire Hathaway, there are dips. Some of those lowered the value of the company for more than half:

As pointed out by Warren Buffer “the table offers the strongest argument I can muster against ever using borrowed money to own stocks. There is simply no telling how far stocks can fall in a short period. Even if your borrowings are small and your positions aren’t immediately threatened by the plunging market, your mind may well become rattled by scary headlines and breathless commentary. And an unsettled mind will not make good decisions.”

In short, that is a fund that replicates other existing indexes. In this particular case, Warren Buffett “bet” on an index fund replicating the S&P. The main feature of the index fund is the passive management style those have. In fact, an index fund starts from the assumption that you can outperform other managed funds, by simply replicating existing funds.

There are several reasons why a passive fund might have, in most cases, a better return than an actively managed fund according to Warren Buffett. To list a few:

As Warren Buffett specified in 2016 when the bet was coming to an end, in relation to the manager ability to bit the market, “the search for the rare high-fee manager who is worth his or her pay is the fact that some investment professionals, just as some amateurs, will be lucky over short periods. If 1,000 managers make a market prediction at the beginning of a year, it’s very likely that the calls of at least one will be correct for nine consecutive years. Of course, 1,000 monkeys would be just as likely to produce a seemingly all-wise prophet. But there would remain a difference: The lucky monkey would not find people standing in line to invest with him.”

How did it go?

From the table above after the first year, the index fund pretty much outperformed the actively managed funds-of-funds.

As he further pointed out back in 2016 by Warren Buffett, “The bottom line: When trillions of dollars are managed by Wall Streeters charging high fees, it will usually be the managers who reap outsized profits, not the clients. Both large and small investors should stick with low-cost index funds.”

Integrity: when Warren Buffett said no to more partners

As noted by Warren Buffett in the 2017 annual report “In January 1966, when I was managing $44 million, I wrote my limited partners: “I feel the substantially greater size is more likely to harm future results than to help them. This might not be true for my own personal results, but it is likely to be true for your results. Therefore, I intend to admit no additional partners to BPL. I have notified Susie that if we have any more children, it is up to her to find some other partnership for them.”

Warren Buffet Manifesto: the 13 principles that drove Berkshire Hathaway since 1983

Intrinsic value can be defined simply: It is the discounted value of the cash that can be taken out of a business during its remaining life. While this definition provided in the annual report is straightforward. In reality, assessing the intrinsic value for an organization is very hard and can be done by looking at it from several perspectives. Warren Buffett has his own way to look at intrinsic value, that while at the beginning of his career was way closer to his mentor, Ben Graham, it changed over the years. For instance, while Ben Graham as value investor pushes to acquire companies when they are cheap. Warren Buffett usually ignored the stock price.

As reported in the annual report for 2017

We are eager to hear from principals or their representatives about businesses that meet all of the following criteria:

(1) Large purchases (at least $75 million of pre-tax earnings unless the business will fit into one of our existing units),

(2) Demonstrated consistent earning power (future projections are of no interest to us, nor are “turnaround” situations),

(3) Businesses earning good returns on equity while employing little or no debt,

(5) Simple businesses (if there’s lots of technology, we won’t understand it),

(6) An offering price (we don’t want to waste our time or that of the seller by talking, even preliminarily, about a transaction when price is unknown).

Berkshire has about 377,000 employees, only 26 of these are at headquarters. Some of the investment segments:

Disclaimer: the information provided in this article is for educational purpose only. The financial information is useful to understand a company’s business operations but has nothing to do with stock movements. For investment decisions consult a professional.

Do you want to know who owns Google and who owns Apple?

Who Owns Disney? Six Myths About Steve Jobs At Pixar

Disney is owned by people like Robert A. Iger,  chairman and chief executive officer (CEO) of The Walt Disney Company, since 2005. Others like Jack...