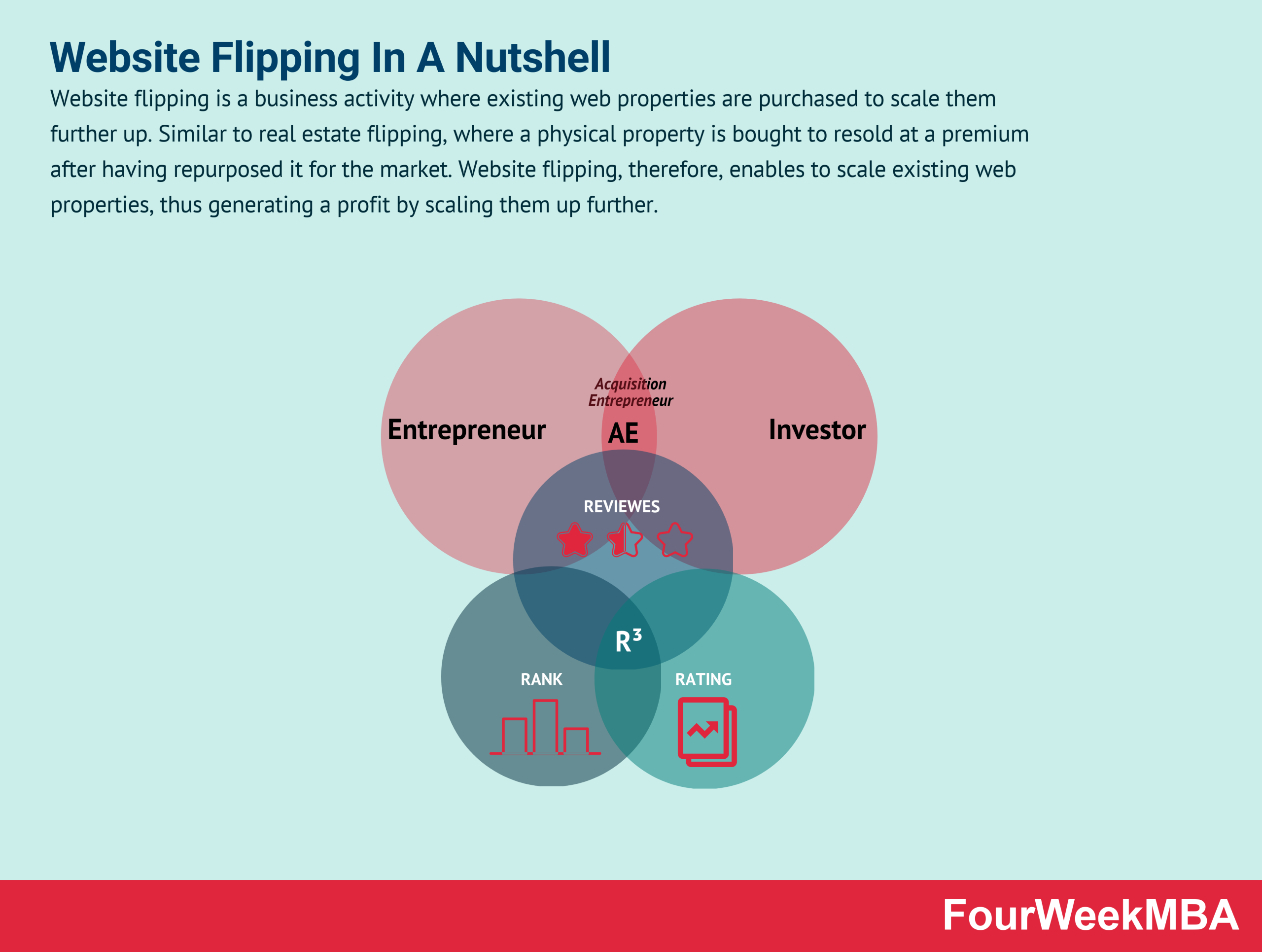 Why it makes sense to buy existing websites?

All things considered, it’s a pretty great time to be an entrepreneur. The concept of the self-made millionaire used to be something of a joke, with those singled out as success stories generally coming from wealthy backgrounds or having benefited from great fortune in some other sense — today, though there’s still some fortune required, it’s relatively minimal.

In fact, let’s run through the basic things you need to pursue your entrepreneurial ambitions (aside from food and water, naturally): a computer, a smartphone, and internet access. You could work solely through a smartphone in a pinch, and use Starbucks Wi-Fi if necessary. So there’s no reason why one person with a decent smartphone couldn’t hit it big.

Throughout the rich digital world, there are numerous options for the aspiring entrepreneur (you can read about a decent selection of them here), but in this piece, we’re going to look at one in particular: website flipping.

Much akin to a cross between stock trading and real-estate investment, website flipping provides the convenience of the former with the reassuring reliability of the latter. Instead of buying and selling conventional assets, you buy and sell entire websites, sprucing them up and moving them along at a profit.

While of course, you can independently arrange the purchase or sale of a website (as we’ll see understanding the deal flow, and how the private market works, beyond marketplaces is critical). We’re going to list a few market places, as it’s generally easiest to get started from there. However, over time, it’s best developing your own sense of business, by either developing a private network that informs you when good deals are out there.

Let’s see some options out there.

Despite the name, Empire Flipping isn’t about flipping empires — just websites. All sellers are vetted to ensure that their stores have stable and verified histories, and their sites are initially listed by average monthly profit to give you an idea of possible performance. You don’t need to speak to buyers or sellers directly, because the site staff will handle it for you, and each buyer must first make a deposit to demonstrate commitment. There’s even a valuation tool if you want to get an idea of what your site may be worth.

As the marketplace with the most awareness in the field of website flipping, Flippa is an extremely popular choice, and for a good reason. The selection is strong, website sales hit around $5m each month, and you can even dip your toe into the app world since that’s also an option. And with a success fee of between 12 and 15 percent, it’s often cheaper than Empire Flippers (with a set fee of 15 percent).

A relatively-new contender, Exchange Marketplace has some notable characteristics that set it apart from the other marketplaces. Two in particular: it only accepts or offers stores running on Shopify, and it doesn’t charge any fees. Because it’s a Shopify project, the profit comes from keeping people on the Shopify platform. No further charge required. Something useful about Exchange is that it allows the narrowing of the selection by type or even location (e.g., profitable Nevada businesses for sale) — it might not seem significant where a store is supposedly based, but it is, particularly given the impending changes to state-determined sales tax regulations.

Yes, it’s true — you can buy or sell a website through eBay. Should you, though? Well, if you’ve ruled out the three previous options for whatever reason, it might be worth a look before you start checking out more niche marketplaces. That’s because eBay might be full of spam but that’s really because it’s full of everything. Given its broad inventory, it certainly warrants a glance before you rule it out entirely.

If none of these marketplaces seems a good fit for your needs, it’s best to consult entrepreneurs who operate in your preferred niche. Where do they buy/sell sites? Look for relevant subreddits, Facebook groups, and Twitter conversations — make some online connections and start asking questions. You’ll find that people will be happy to help.

Whichever marketplace you ultimately decide to use, the hardest part is choosing a website to buy. You want something that already works well enough can be updated somewhat to drive up the sales and is likely to hold its value (at least for a little while). Let’s look at some examples of how you can get this wrong:

If you’ve selected one of the top marketplaces we looked at (the first three, really), then you can trust in the accuracy of the financial information provided for a listing — but interpreting it is up to you. You may be familiar with the warning of “past performance is not a guarantee of future success,” as some version of it will crop up for any trading advice service, and it certainly applies here.

It isn’t enough simply to know that a website has been successful before. If you don’t know how that success was achieved, you might struggle to replicate it. Sometimes people sell websites because they just want to move on to pastures new, but sometimes they’re fortunate enough to luck into some early success and try to exploit that success to pass their sites off as being more stable as they really are.

Ideally, each site you buy should offer each of the following:

If you can pick up a suitable site, you’ll have a great foundation upon which to build. What comes after that is up to you. You can focus on driving some sales to improve the record and raise the value, or you can adjust the style and product range to make it a more well-rounded site for whichever person ends up buying it from you.

When I interviewed Walker Deibel, an entrepreneur, investor, advisor and the author of the book “Buy Then Build” he told me that to be a successful acquisition entrepreneur you needed to avoid these pitfalls:

The truth is that if you’re an entrepreneur and you start abusiness, and you start this thing from scratch. It’s hard, its hard work and then the second year if you’re one of the lucky ones, yourbusinessgrows, whatever, 200% over the year before.

Right? It sort of “I’ve done with it all that I can.” And I’ve run my course and not only that, but I’m an entrepreneur.

So, I need to kind of move on and do my next thing, and it’s a great opportunity for an acquisition entrepreneur to come in. Presumably, use a bit of leverage to get an outstandingROIon it.

Jump in, take over, and create thebusinessthat they want intending to take thatbusinessto the next level — all the while getting theROI of the equity build up as well. So,number one is that they put way too much weight on the reason for selling.

One thing, of course, is to make sure you do your homework and due diligence:

Once done that, these are the primary steps:

Another option to become good at acquiring businesses is to leverage on the Thras.io R Cubed model.

This is well suited for those that want to buy FBAs (third-party stores on top of Amazon), and as Thras.io explains it’s based on a few key steps:

As Ken Kubec from the Thras.io team highlighted, the company starts with a broad research approach, and it starts narrowing it down to what they call the R Cubed (Reviews, Rating and Rank).

And from there, they start asking questions with a drill down approach, starting from the reviews:

Do they have reviews that should establish them as a leadership position?

If so, it goes a level down and look at product/rating:

Do they have their rating, the product quality to back up and sustain their position?

And lastly, about ranking:

...and then rank: are they ranking organically on high keyword volume?

Thras.io looks at what they call “simple everyday hard-good objects.”

The buying process is primarily focused on businesses which revenues span from 1-30 million dollars, and that are private labels.

Thras.io also looks for Amazon businesses with a lower amount of SKUs (fewer products but more sales). Indeed, for Thras.io the most valuable businesses are those that hit over a million in sales with the fewer SKUs.

Do you need other ideas to make money? Below a list of ideas with low cost and high profit we found for you: