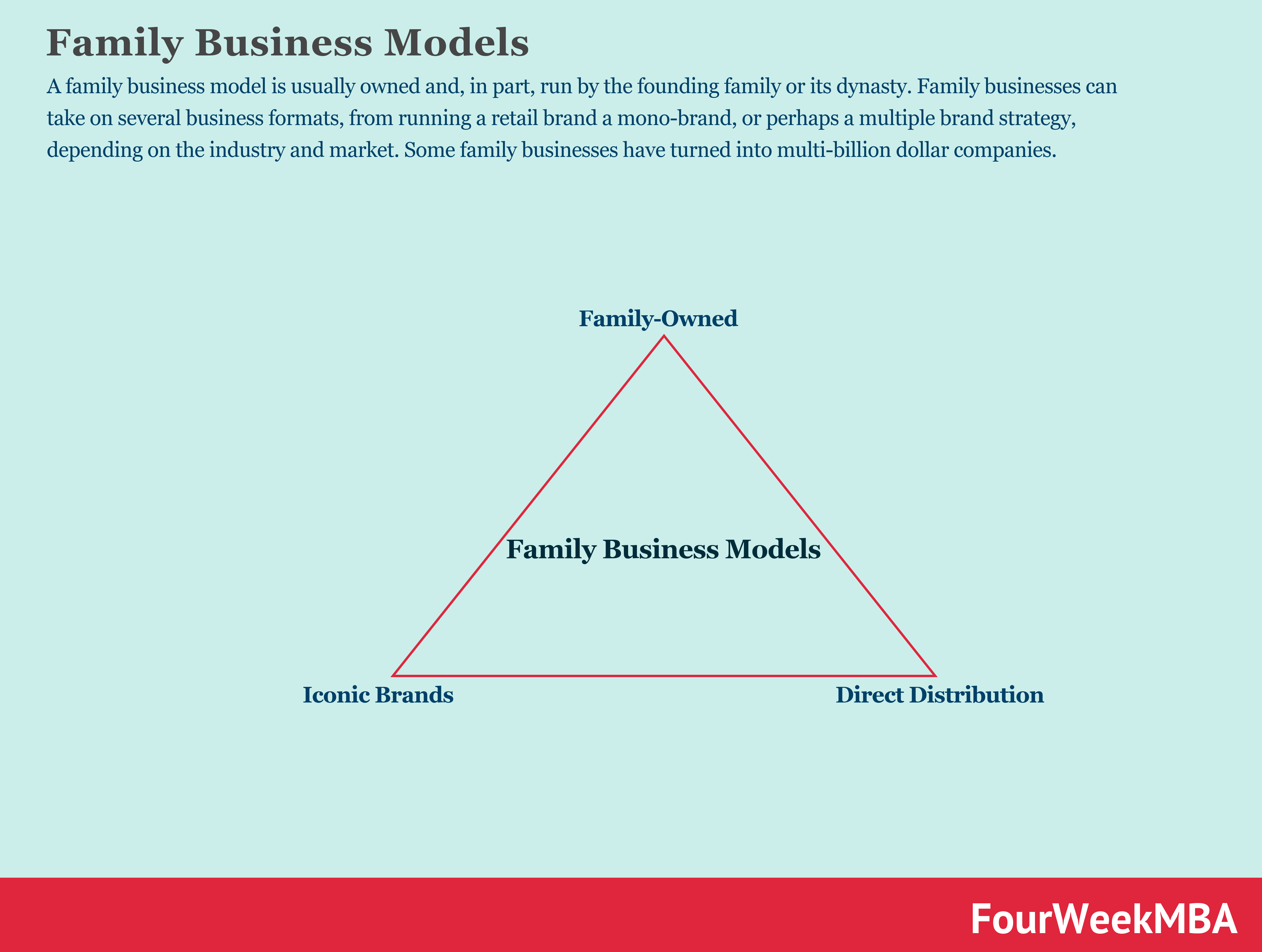 A family business model is usually owned and, in part, run by the founding family or its dynasty. Family businesses can take on several business formats, from running a retail brand a mono-brand, or perhaps a multiple brand strategy, depending on the industry and market. Some family businesses have turned into multi-billion dollar companies.

Brunello Cucinelli is an Italian luxury and casual-chic brand, which built its success around cashmere clothing. Brunello Cucinelli built its business around the Humanistic Enterprise model, which revolves around Italian Craftsmanship, Sustainable Growth, and Exclusive Positioning and Distribution. More than 50% of the company revenues come from the retail mono-brand, directly managed by the company.

Luxottica has built its whole success based on integrating the whole supply chain, thus connecting its sourcing and manufacturing process, wholesale capability and retail stores to reach the final consumers.

LVMH is a global luxury empire with over €46 billion in revenues for 2018 spanning across several industries: wines and spirits, fashion and leather goods, perfumes and cosmetics, watched and jewelry, and selective retailing. It comprises brands like Louis Vuitton, Christian Dior Couture, Fendi, Loro Piana, and many others.

LVMH follows a multi-brand integrated strategy, where each brand is managed independently. This enables each brand part of the group to keep its identity, while still keeping the advantage of economies of scale, deriving from the fact those brands belong to the holding group.

Prada kept a tight ownership structure where the company is mostly in the hands of the family.

Kering Group follows a multi-brand business model strategy (very similar to LVMH), where the central holding helps the brands and Houses part of its portfolio to leverage on economies of scale while creating synergies among them.

At the same time, those brands are run independently. This multi-brand strategy comprises brands like Gucci, Bottega Veneta, Saint Laurent, and Puma.

The two primary operating segments based on luxury and sport & lifestyle.

With over $495 in net sales as of January 2018, and over $4.5 billion coming from Membership and other income.

The company operates three primary units that in 2018 comprise Walmart U.S. (approximately 64% of our net sales), Walmart International (about 24% of net sales), and Sam’s Club (approximately 12% of its net sales) a membership-only warehouse clubs and operates in 44 states in the U.S. and in Puerto Rico, as well as eCommerce.

Walmart’s Mission can be summarized as “helping people around the world save money and live better – anytime and anywhere – in retail stores and through eCommerce.” While its vision is to “make every day easier for busy families.” Walmart defines “busy families” as the bull’s eye of its business strategy.

Family business models, just like other companies can take several forms that help them scale and yet keep the business successful. Some of the examples we saw, you can have a deeper look below:

The Rise Of The Super Gatekeepers

In the digital era, digital platforms made more options available to consumers. Where previously, companies had locked in distribution, thus...