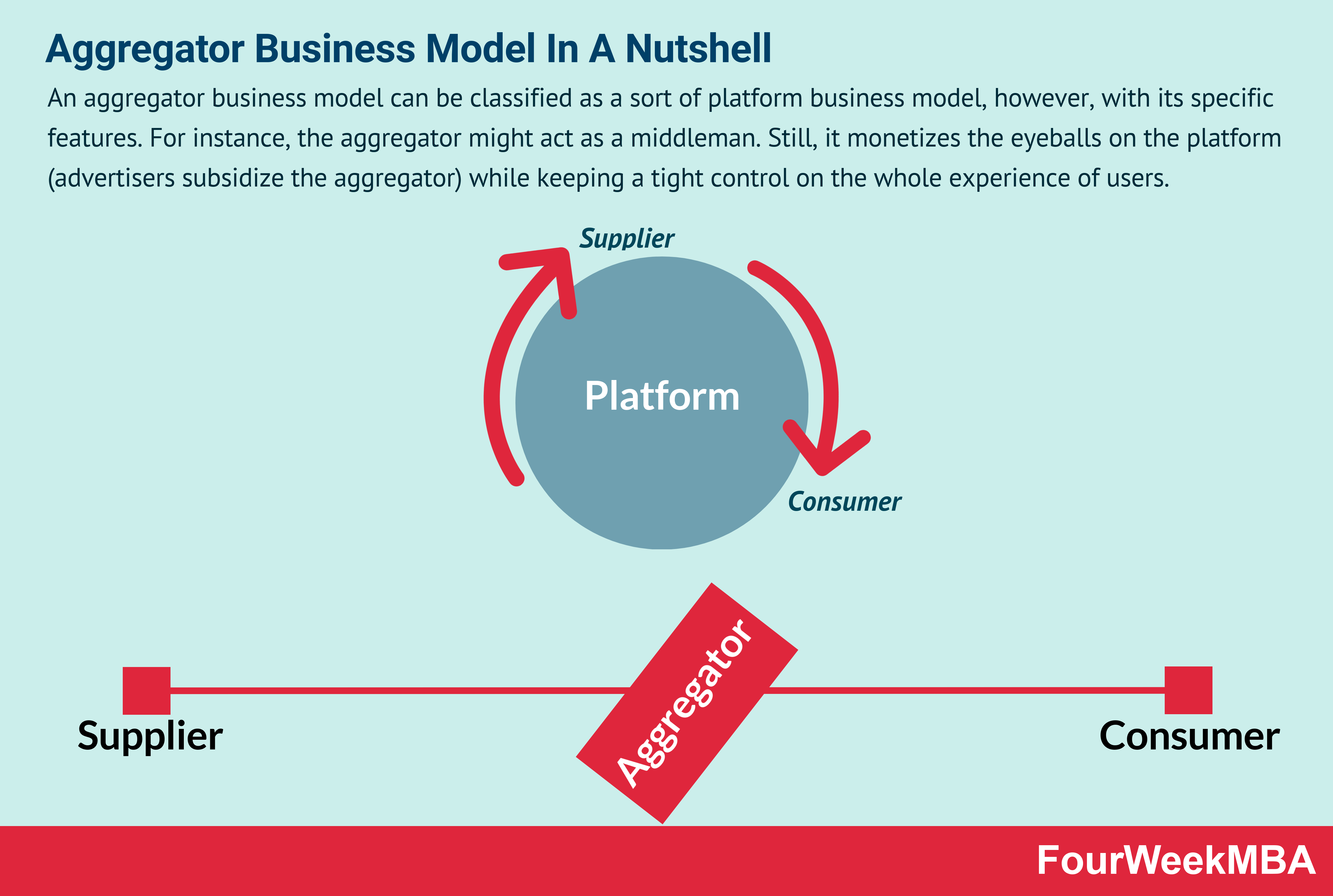 An aggregator business model can be classified as a sort of platform business model, however, with its specific features. For instance, the aggregator might act as a middleman. Still, it monetizes the eyeballs on the platform (advertisers subsidize the aggregator) while keeping a tight control on the whole experience of users.

The birth of the aggregator

There isn’t a single way to define aggregator business models. The person who most popularized this term was Ben Tompson from stratechery.com, as he explained in the graphic below:

This is a great way to classify aggregator business models.

In this guide, we’ll look at a few key differentiators, to define an aggregator business model, but also to distinguish it with the platform business model based on my observations.

Is the aggregator a platform?

Before looking at how an aggregator might be different from a platform, let’s specify that the aggregator can be comprised within the platform business model, however, it has very specific features.

Middleman vs. invisible hand: intermediation rather than interactions

Therefore, while in a pure platform business model the platform scales by becoming invisible (a smooth experience is one of the keys to trigger network effects).

In an aggregator model, it’s the aggregator that keeps interacting with the two or more parties involved (Google shows users a search result page, and the same Google handles the ad inventory; users and advertisers don’t interact with each other to set the price).

For instance, Google as a search engine is more of an aggregator, where the company centrally enriches its index and builds up its rankings. As a side effect, there is still an ecosystem of publishers and advertisers born as a result of this aggregation process but it’s not proximate.

Therefore, the aggregator acts like a middleman but rather than monetizing directly by getting a cut it might monetize via advertising.

Central control vs. Network effects: top-down vs. bottom up

One of the key elements of platform business models is network effects. Or put it shortly, for each additional user joining the platform, that becomes more valuable to the next one.

While in a platform business model this is the essence, in an aggregator business model instead, it’s the aggregator that centrally scales up the platform. Going back to Google’s case, the company performs wide and core algorithms change to substantially influence how the search engine will give back results, at scale.

Subsidized and asymmetric vs. taxed and symmetric

The aggregator might leave the service free forever, and sell the eyeballs through a sort of attention-based model. Thus, advertisers or companies pay to get visibility on top of the aggregator’s platform.

The pure platform instead acts like a government, getting a tax on each transaction. While the aggregator makes the service subsidized by a key customer (companies paying for visibility on the platform) and the service is free.

A platform business model by acting more like a state – once it makes sure some key guidelines are followed (safety of the network, lack of spam on the platform, stable and liquid infrastructure, and so on) – the rest is left to the key players’ interactions.

Zooming Into The Freeterprise Business Model

A freeterprise is a combination of free and enterprise where free professional accounts are driven into the funnel through the...