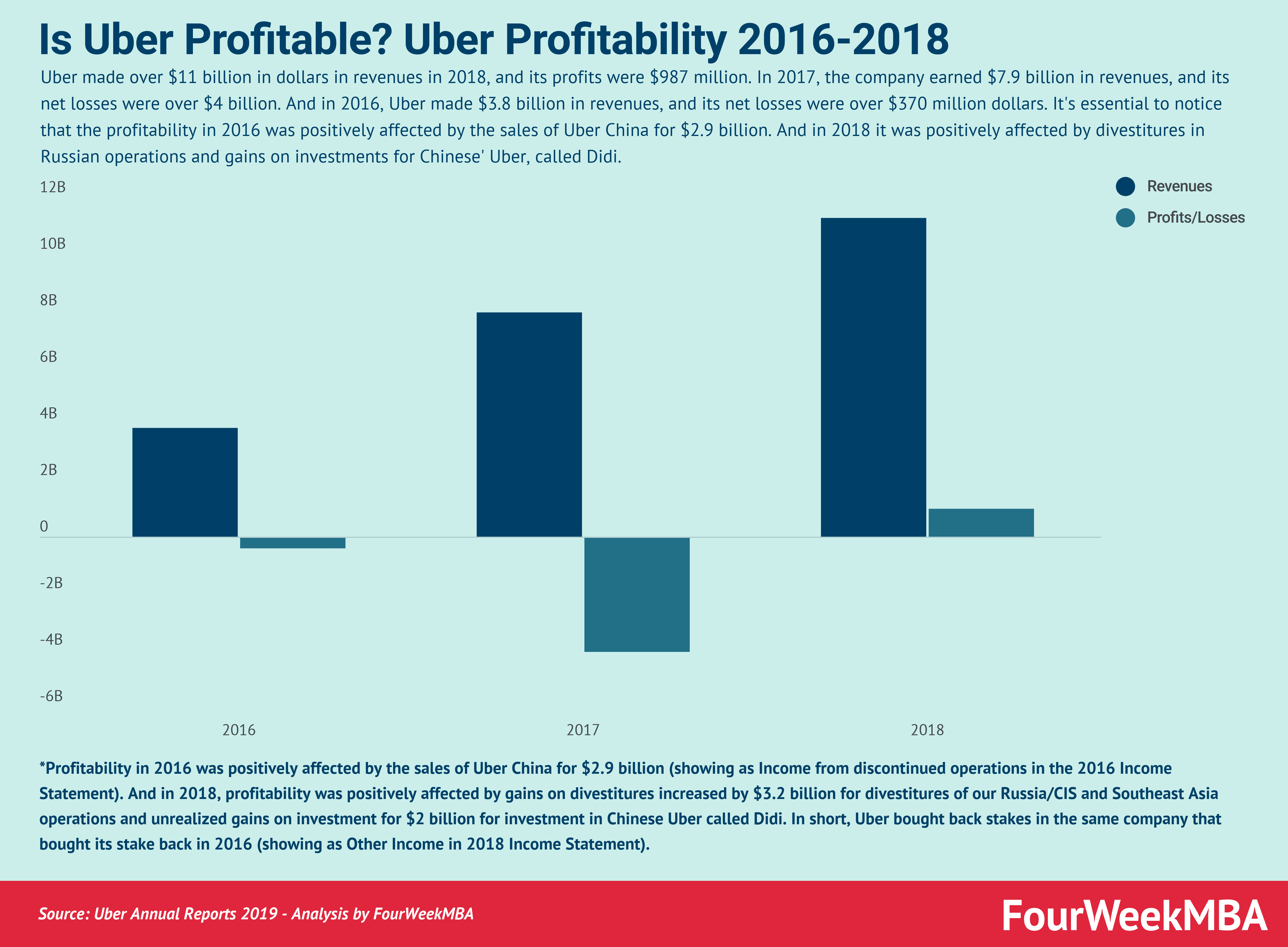 Uber made over $11 billion in dollars in revenues in 2018, and its profits were $987 million. It’s essential to notice that the profitability in 2018 was positively affected by divestitures in Russian/CSI operations and from gains on investments in the “Chinese’ Uber,” called Didi.

It’s essential to notice that the profitability in 2016 was positively affected by the sales of Uber China for $2.9 billion. And in 2018 it was positively impacted by divestitures in Russian operations and gains on investments for Chinese’ Uber, called Didi.

Sales of Uber China, which would go to the Chinese startup, Didi. Source: Uber Financial Statements.

As pointed out in Uber financial statements:

On August 1, 2016, the Company sold its majority-owned subsidiary, Uber China, Ltd. (“Uber China”) to Xiaoju Kuaizhi, Inc. (“Didi”) for an equity stake in Didi, valued at the time at approximately $6.0 billion. The financial results of Uber China’s operations are presented as discontinued operations in the consolidated statements of operations and, as such, have been excluded from continuing operations for all periods presented. Refer to Note 15—Discontinued Operations for further information. During the year ended December 31, 2018, the Company completed the disposition of the Uber Russia and the Commonwealth of Independent States (“Uber Russia/CIS”) operations and the sale of the Southeast Asia operations. Refer to Note 19—Divestitures for further information. These 2018 divestitures did not represent a strategic shift that had a major effect on the Company’s operations and financial results, and therefore are not presented as discontinued operations.

Pretty much Uber sold to Didi, but then it acquired a stake into the company by 2017:

From the schedule above, you can see the several investments Uber made throughout the years, also based on dismissions, sales, and joint ventures.

As pointed out on Uber financial statements:

In July 2017, a wholly-owned subsidiary of the Company agreed to contribute the net assets of its Uber Russia/CIS operations into a newly formed private limited liability company, MLU B.V., with Yandex and the Company receiving ownership interests in MLU B.V. As a result of this transaction, the Company determined that the contributed assets and liabilities were disposed of and met the held for sale requirement as of December 31, 2017. The Company performed an evaluation to determine if the sale constituted discontinued operations and concluded that the sale did not represent a major strategic shift, primarily because the Uber Russia/CIS operations did not materially affect consolidated assets, revenue or loss from operations of the Company. In addition, the Company determined the sale constituted the sale of a business in accordance with ASC 805. The carrying value of Uber Russia/CIS’s total assets and liabilities were $20 million and $15 million as of December 31, 2017, respectively. The transaction received approval from the necessary regulatory agencies in the fourth quarter of 2017 and closed on February 7, 2018.

Gain and divestitures are coming from dismissed, sold, and reorganized operations.

Gain on divestitures increased by $3.2 billion from 2017 to 2018. This increase was due to gains on the divestitures of our Russia/CIS and Southeast Asia operations.

Unrealized gain on investments increased by $2.0 billion from 2017 to 2018. This increase was primarily due to a gain from a fair value adjustment of our Didi investment.