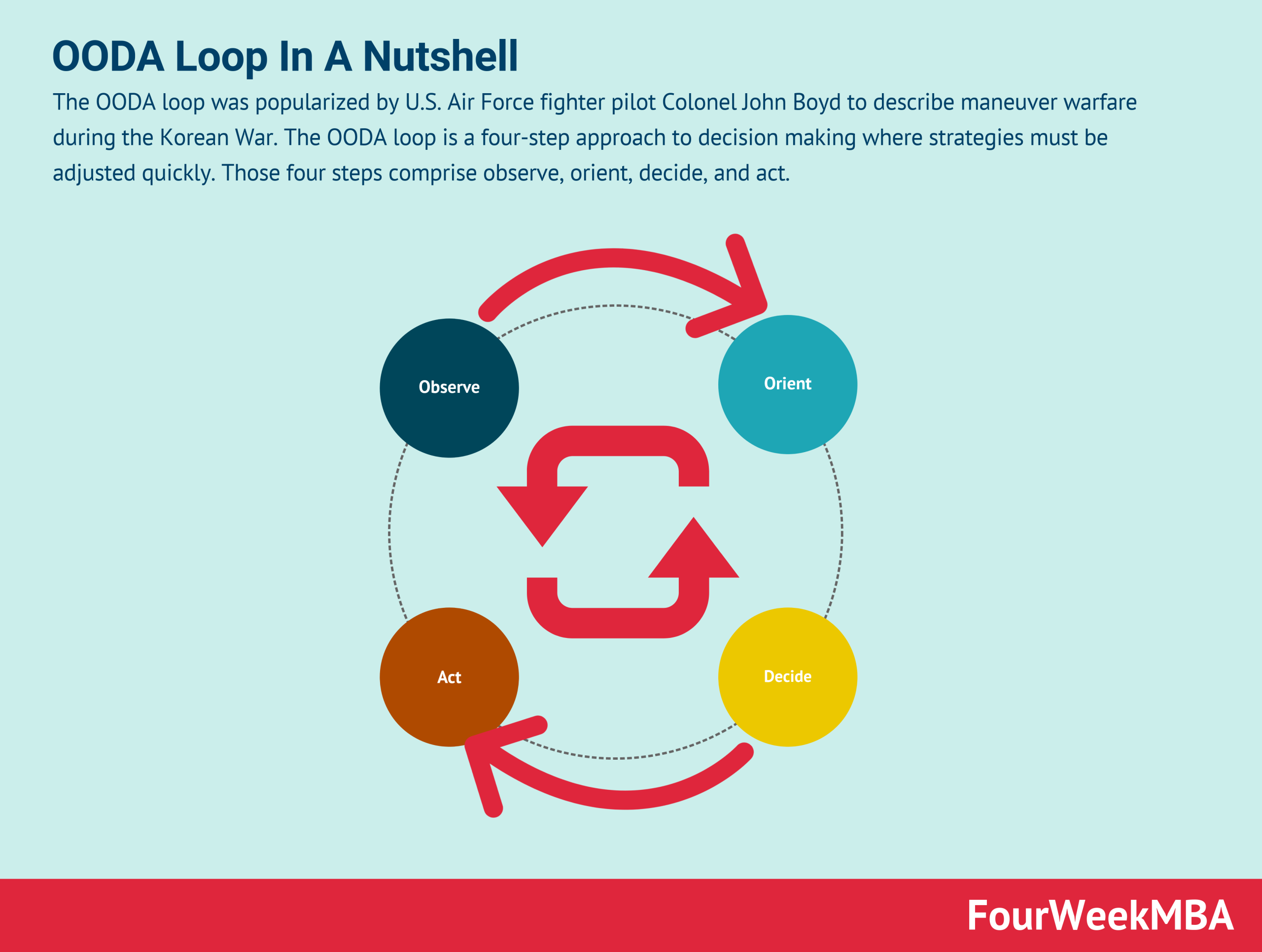 The OODA loop was popularized by U.S. Air Force fighter pilot Colonel John Boyd to describe maneuver warfare during the Korean War. The OODA loop is a four-step approach to decision making where strategies must be adjusted quickly. Those four steps comprise observe, orient, decide, and act.

Boyd noted that USAF pilots flying F-86 fighter jets were able to consistently down the Korean Mig-15 by a factor of 10 to 1. This was even though the Mig-15 was a technically superior aircraft, with better acceleration and higher climb rates.

However, the F-86 had two distinct advantages. Thanks to a hydraulic control system, it could transition from one maneuver to another in rapid succession. The canopy of the F-86 was also more expansive, allowing pilots to better observe and react more quickly in combat. Ultimately, the F-86 was the more agile of the two jets.

In the context of the OODA loop, agility is represented as a series of decision-making cycles. Businesses can use these cycles to solve specific problems quickly, thereby remaining competitive.

In the next section, we will look at the cycle in more detail.

Decision-making cycles of the OODA loop

In its simplest form, the OODA loop has four stages.

What are the internal and external drivers of change? Where are the inflection points in trends?

Decision-makers must observe changes at the micro or macro level to determine whether a response is required. Drivers might include ever-increasing internet speeds or the continued replacement of jobs with technology and automation.

Is the business aligned with the observations made? Scenario planning is useful in ensuring that strategic plans are meeting expectations or challenging expectations.

This is the most important step because it determines how a business will position itself to take advantage of its observations. It’s also the step most vulnerable to bias, which has five main influences:

As a rule, each decision made in the orienting process must be based on evidence. Businesses must also understand the perspective of a competitor by using the five influences above. This, to some extent, can predict how a competitor will behave.

What is the most appropriate course of action?

Here, taking no action is sometimes the best choice. Indeed, businesses should avoid acting for the sake of it.

Once a decision is made it is important to act quickly and implement it. The results of decision implementation are then fed back into the observation stage and their impact re-assessed.

Note also that the OODA loop is not a cyclical process but a series of iterative adjustments.

Businesses should also remember that it favors quick decision making to remain competitive. For some decisions where the cost of failure is high, a more considered approach is required.

For example, a relatively minor change in customer refund policy can be made quickly and adapted if required. But a significant product refresh has a higher cost of failure and as a result, would likely reduce competitiveness if not implemented properly.