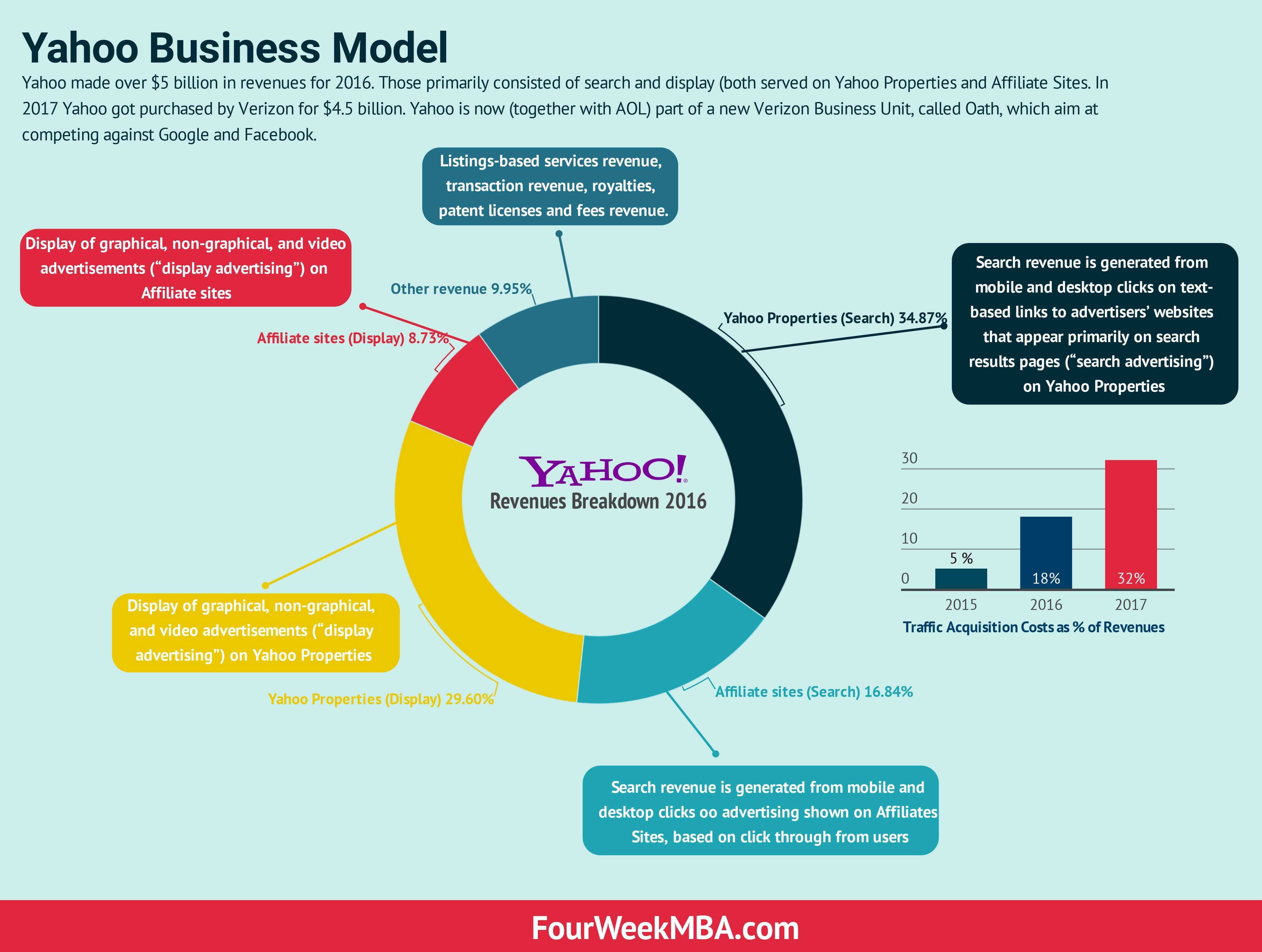 Yahoo made over $5 billion in revenues for 2016. Those primarily consisted of search and display (both served on Yahoo Properties and Affiliate Sites. In 2017 Yahoo got purchased by Verizon for $4.5 billion. Yahoo is now (together with AOL) part of a new Verizon Business Unit, called Oath, which aim at competing against Google and Facebook.

When users on Yahoo search pages from mobile or desktop click on text-based links to advertisers’ websites, this is when revenue is generated. Indeed, this is a paid click. Those paid clicks can be performed on both Yahoo Properties and Yahoo Affiliate sites.

Display revenue is recorded when graphical, non-graphical, and video advertisements (“display advertising”) is shown on both Yahoo Properties and Affiliate Sites. Revenue is recorded based on specified criteria such as the number of impressions during a fixed period targeted to a specific audience or in a particular placement.

Therefore revenues are recognized both as impressions or clicks on display advertisements, including native advertising. An Impression is defined as an advertisement appearing in pages viewed by users. Clicks are delivered when a user clicks on an ad.

Listings-based services also include classified advertising, such as Yahoo Local, which revenue gets recognized when services are performed. Those services include transactions generated on Yahoo Properties, such as Yahoo Small Business, Yahoo Travel, and Yahoo Shopping.

To understand Yahoo monetization strategy, it is critical to understand its agreement with Microsoft over the years.

The search agreement between Microsoft and Yahoo determined the percentage of revenues generated from Microsoft’s services on Yahoo Properties and Affiliate sites to Yahoo. Revenue Share Rate was 88% for the first five years of the Microsoft Search Agreement. It increased to 90% on February 23, 2015.

After a change to the search agreement (called Eleventh Amendment), the Revenue Share Rate increased to 93%.

As specified on Yahoo annual report for 2016:

Approximately 37% of the Company’s revenue for 2016 was attributable to the Microsoft Search Agreement.

The traffic acquisition cost is a critical metric to assess the success of a business model based on traffic. That applies to websites in general, yet that is even more important for search engines. It is therefore important to keep monitoring it to make sure the business is profitable in the long run.