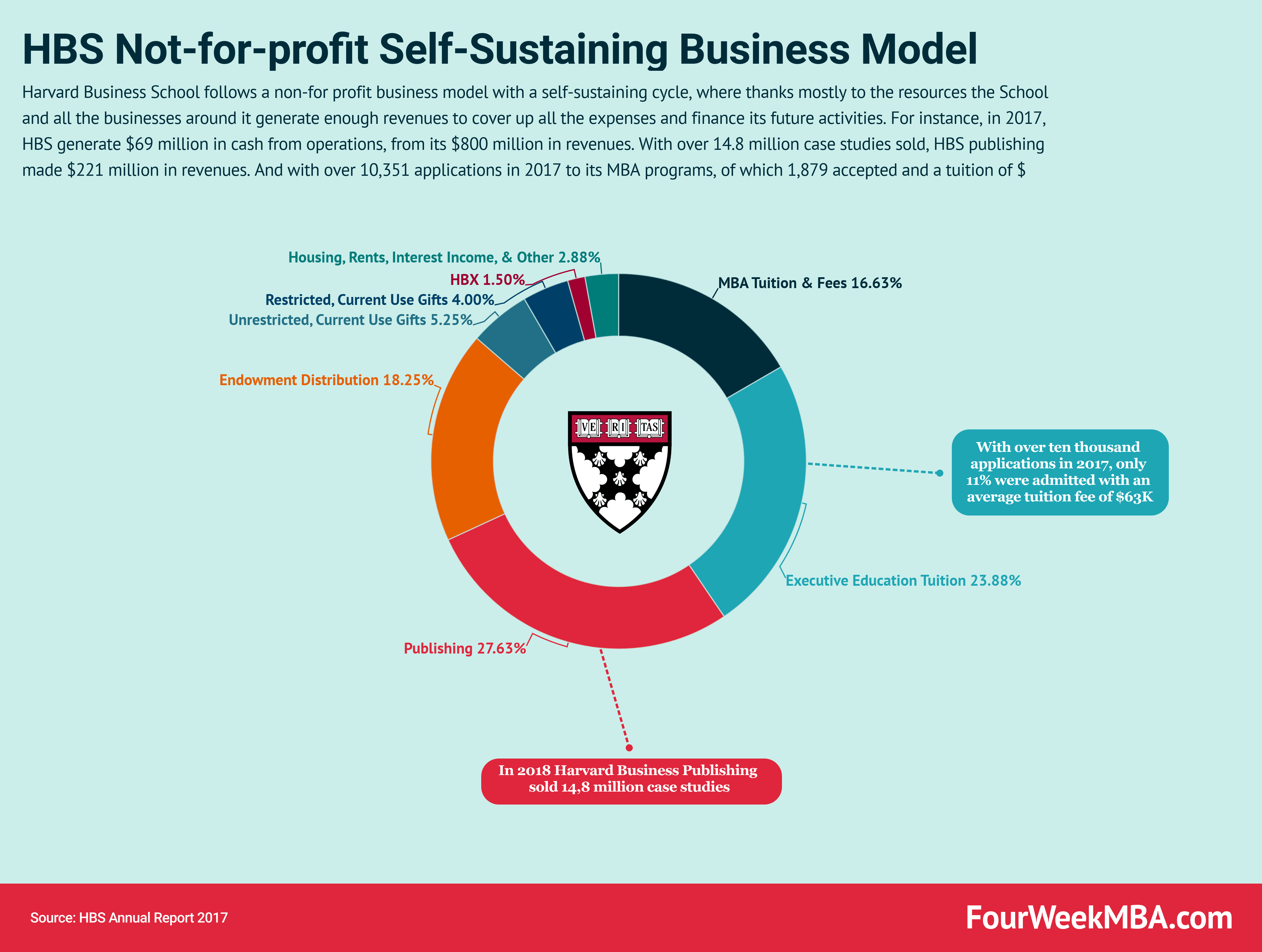 Harvard Business School follows a non-for profit business model with a self-sustaining cycle, where thanks mostly to the resources the School and all the businesses around it generate enough revenues to cover up all the expenses and finance its future activities.
For instance, in 2017, HBS generate $69 million in cash from operations, from its $800 million in revenues. With over 14.8 million case studies sold, HBS publishing made $221 million in revenues. And with over 10,351 applications in 2017 to its MBA programs, of which 1,879 accepted and a tuition of $ 63,675, made $191 million in 2017.

A glance at the self-sustaining model

As reported on the HBS annual report for 2017:

The model begins with our commitment to internally funded faculty research. Free from the constraints that can come with grants and other outside funding, HBS research budgets allow the School’s faculty to stay close to practice—to travel wherever their work takes them and to interact in the field with leaders and managers who are confronting the most interesting business challenges and opportunities.

HBS disseminates the resulting intellectual capital to educate leaders and influence the practice of management on a global scale, both through its educational programs and through Harvard Business Publishing (HBP).

In general, for a not-for-profit organization, the prevailing model is that of grants and outside funding. While HBS does still rely on a good chunk of its total revenues on endowments and gifts (27% of its revenues in 2017). It has also been investing to create a self-sustaining infrastructure.

For instance, Harvard Business Publishing (HBP) has generated $221 million in revenues, as of 2017 proved to be the most reliable revenue contributor with 28% of its revenues.

Profits as a self-sustaining funding model

Completing the self-sustaining cycle, operating surpluses at Executive Education and HBP supplement revenues from MBA tuition and alumni gifts as the primary source of funding for faculty research. In short, the success of the HBS economic model starts with the value of the faculty’s scholarship and the School’s ability to translate this value into income for operations, which is then reinvested in future intellectual capital creation.

In this self-sustaining mechanism, Harvard uses the profits generated by its organization, to invest it back on the infrastructure that keeps it going.

How does HBS make money?

HBS funds its operations with cash that comes from a few primary sources:

Those sources make up for most of HBS income.

Tuition and fee revenues do not fully recover MBA Program operating expenses at HBS, much less the School’s long-term investments in academic innovation. The shortfall is offset primarily with income from gifts given by alumni and friends of the School whose generosity enriches the HBS educational experience for future generations of students.

It is interesting to notice that the overall cost to run an MBA program it’s not covered by the tuition fees. Instead, apparently as of 2017, HBS is offsetting those losses with the gifts received by alumni and friends of the school.

HBR publishing is a cash cow

Reflecting competitive pressures in the global publishing market, HBP’s fiscal 2017 top-line growth was slightly below the School’s forecast and the slowest since fiscal 2010. While continuing to make strategic investments in future business growth, HBP shaved millions of dollars off its budgeted cost of goods sold and, as a result, delivered a healthy contribution margin for the year.

HBR group sales remained flat for the third consecutive year in fiscal 2017. The subscription model for Harvard Business Review changed from 10 to six issues annually, resulting in a slight decrease in circulation revenue. This decline was offset, however, by growth in revenue from reprints and advertising. Harvard Business Review subscription renewal rates and online readership were up substantially from the prior year.

It’s quite interesting to notice how HBP managed to transition to digital, and now its primary source of income is the publishing side. It seems that the case studies sold on Harvard Business Review are the most successful piece of content that might be contributing the most to HBP revenues. In 2017, HBP sold 14.8 million case studies!

Although income from HBP and Executive Education makes HBS less reliant on its endowment than other schools at Harvard, philanthropic revenues, including distribution from the endowment and current use gifts, provide financial stability and flexibility that are crucial to the School’s ability to execute on its mission.

Even though HBS has shifted and is shifting to a self-sustaining not-for-profit model. In reality endowment and contributions are still a critical element to the financial stability of HBS as one of the most prestigious academic institutions in the world.