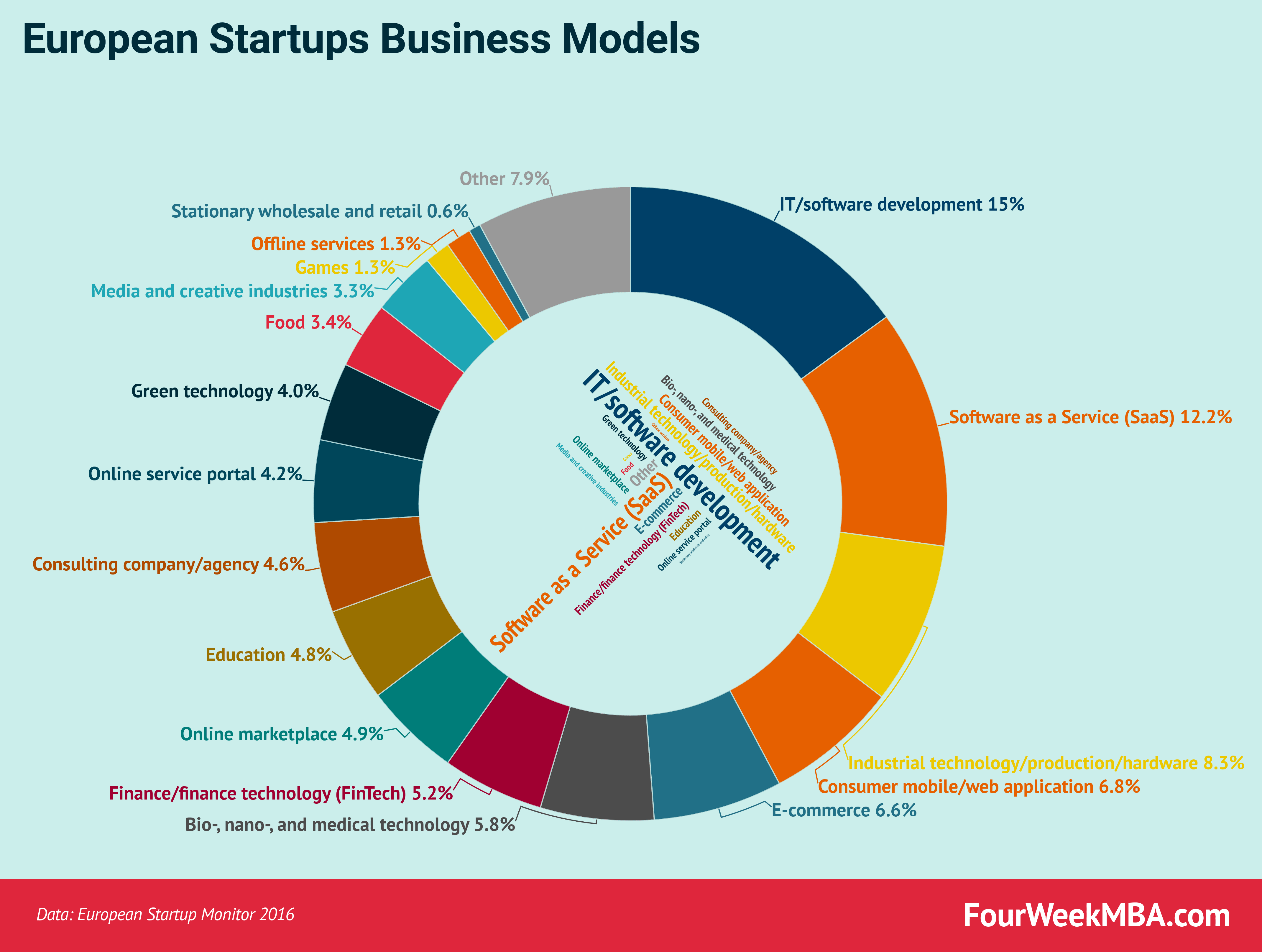 According to the European Startup Monitor (2016), the most used business models in the European ecosystem are IT/software development, followed by SaaS and Industrial technology/production/hardware. The greatest challenge is related to sales and customer acquisition.

Let’s start from a basic question: What are the key elements and ingredients that make European startups successful?

According to the European Startup Monitor (ESM), in 2016  over fifty percent of startups founders saw their products as an international market innovation. Over forty percent of founders saw technology improvement as another crucial differentiator. Twenty-eight percent thought of business model innovation as a key element. Lastly, over twenty-eight percent saw their processes as another critical ingredient.

In short, among the key elements for a European Startup success, the four of them that mattered the most can be broken down into:

Why it all goes back to business model innovation

A business model is made of many moving parts. More precisely, a proper distribution combined with a product that the market wants (product/market fit) and a technology that makes the users’ experience seamless is part of a process called business model innovation.

If you look at the companies that today dominate the entrepreneurial landscape (Facebook, Amazon, Apple, Netflix, and Google) those all came up with innovative business models. What does business model innovation entail?

Business model innovation entails new strategies and new ways of doing things. However, innovative business models also result from a combination of existing patterns. For instance, back in the 2000s, Google launched its advertising machine, called AdWords (now Google Ads). Google got inspiration from an existing search engine, called Overture (formerly GoTo). Overture had for the first time introduced an auction system based on a cost-per-click mechanism. Google took that system, improved on it, by adding a quality score system, which became Google’s cash cow for years to come.

This is one of the many examples of how business model innovation springs up from existing patterns.

A glance at the European startup ecosystem

Europe is comprised of countries with high diversity, in terms of language, economy, and cultural barriers. For that matter, the European Ecosystem is pretty fragmented. Let’s dive into some key facts and statistics.

Based on the European Startup Monitor analysis for 2016 (which used data from 2,515 startups from all 28 European member states and other important countries in the European startup ecosystem – like Israel) three out of four startups were independently founded. While around ten percent was a spin-off from a university or university product. And the remaining startups were a spin-off from existing companies or other research projects.

Over seven percent of these startups were no older than four years. The overall age of startups part of the ESM study was an average of two point four years. With a minimum life of one point three years in Greece and three-point four in Finland.

What business models were they using for their operations?

According to the ESM study, the prevailing business models could be divided into ten primary categories:

It is interesting to notice that each European Country used a primary business model. For instance, Austria, Belgium, Finland, Ireland, and Spain primarily run on a SaaS business model. Other countries like France, Germany, and Italy run primarily IT and software development business models.

More than fifty percent of those companies offered products or services that addressed B2B users. And over sixty-seven percent generated revenues through B2B customers. Countries like the United Kingdom, Switzerland, and Spain focused on B2C users. While Finland, Belgium, and Portugal focussed on B2B users.

As reported by the European Startup Monitor:

To provide an overview of the industries in which the startups are operating, the respondents were asked to match their startup to one of eighteen industry categories. The results indicate the relevance of the digital economy for innovative European startups; the digital economy accounts for five of the seven major categories. Most startups stated that their venture belongs to the IT/software development sector (15.0%) followed by software as a service (12.2%) and industrial technology/production/ hardware (8.3%) . The most frequent categories on the level of individual countries are IT/ software development (8 countries) and software as a service (8 countries).

Sales and customer acquisition is the biggest challenge European startups have. As pointed out many times over on this blog, sales and distributions are among the most challenging part for any startup. At the same time, it is also the reason why many startups fail and many others do not succeed.

Harvard Business School follows a non-for profit business model with a self-sustaining cycle, where thanks mostly to the resources the...