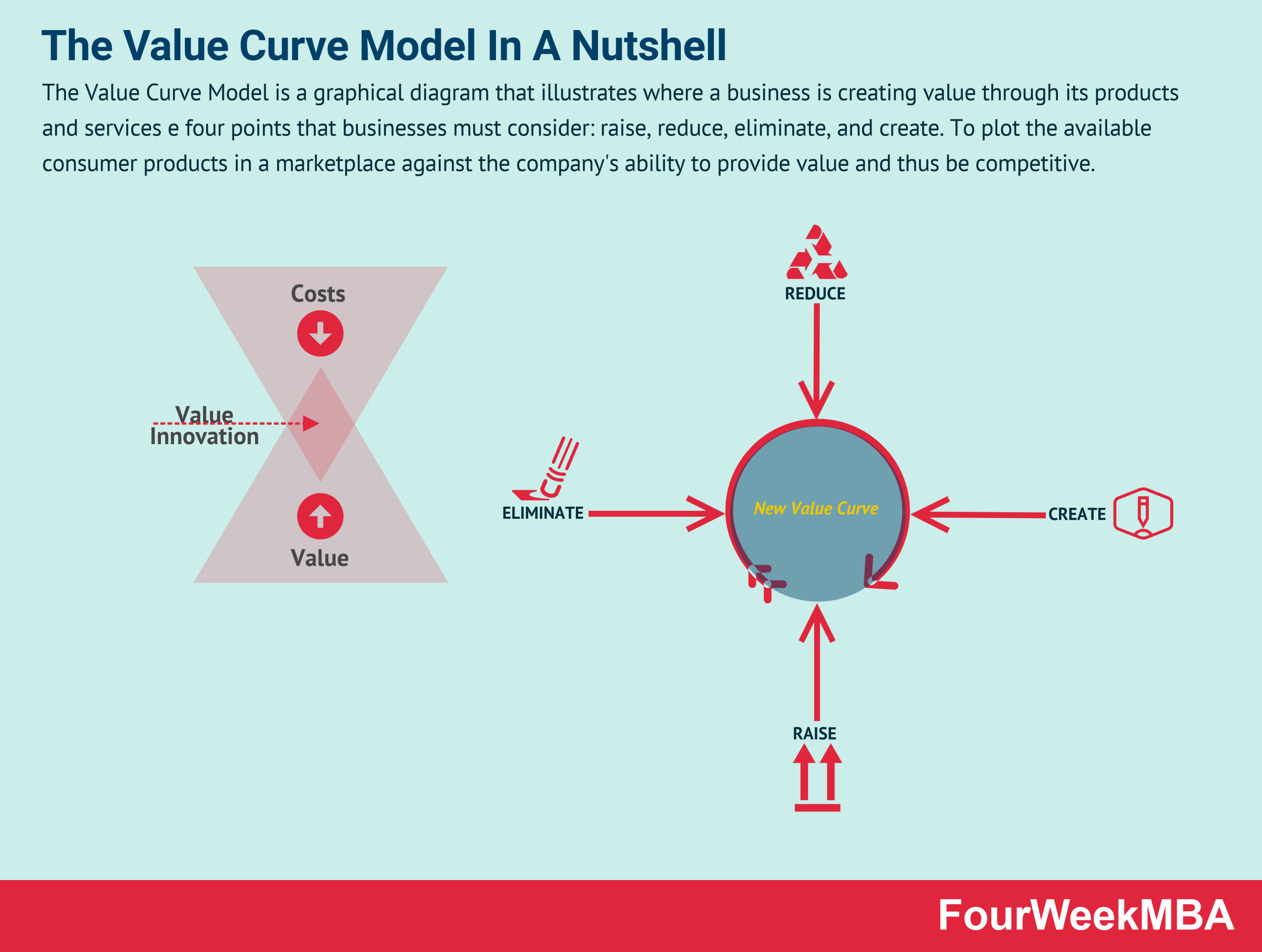 The Value Curve Model is a graphical diagram that illustrates where a business is creating value through its products and services e four points that businesses must consider: raise, reduce, eliminate, and create. To plot the available consumer products in a marketplace against the company’s ability to provide value and thus be competitive.

The Value Curve Model was developed by authors W. Chan Kim and Renee Mauborgne in 1997.

The concept was expanded in their 2005 book Blue Ocean Strategy, where they argued that a business should focus on creating a new product and subsequent market with no competition. This in direct contrast to traditional “red ocean” strategies, which advocate trying to beat the competition in an existing market.

The model itself can be depicted on a graph, with the following axes:

An example of the Value Curve Model can be seen by considering air travel in Europe. In this case, airline companies would be plotted on the y-axis and then judged according to their competitive ability in certain industry factors on the x-axis. Specifically, these might include low fares, ancillary services, airport taxes, and average delay time.

A higher position on the graph correlates to a higher score. Returning to the airline example, British Airways might offer more value in ancillary services when compared to Ryanair. However, Qatar Airways might beat both competitors when it comes to average delay time.

Ultimately, the Value Curve Model allows businesses to compare their products against those of their competitors. This allows them to identify potential gaps in the market or identify areas where there is room for improvement.

Once the value curve has been established, the Four Actions Framework can be employed to alter the product in a given market. While Kim and Mauborgne advocate the Blue Ocean Strategy, the framework can also be used to refine existing products.

In pursuit of these goals, there are four points that all businesses must consider:

Can any existing product attributes (competitive factors) be enhanced in such a way that they provide extra consumer value? In other words, which attributes can set new industry standards or trends?

Conversely, are there any such elements that can be reduced or eliminated if their relative value or cost does not justify the means? Perhaps some factors erode profits or reduce competitive advantage?

This means removing factors that customers pay for as part of a status quo that industry players take advantage of. In the wine industry, the aging qualities of wine and the complex terms used to describe wine are promoted to add value to the finished product. But what do these somewhat pretentious and superfluous terms mean to the average consumer? Better value-adding, competitive factors may include wine club discounts or guided tours of the winemaking process.

Is there an opportunity to bring something novel to the market that solves a consumer problem in a more effective way than a competitor offering? Instead of creating complex wines with complicated descriptions, a winery could produce a wine that was fun, unpretentious, and easy to drink at an attractive price point.

The McKinsey Horizon Model helps a business focus on innovation and growth. The model is a strategy framework divided into...