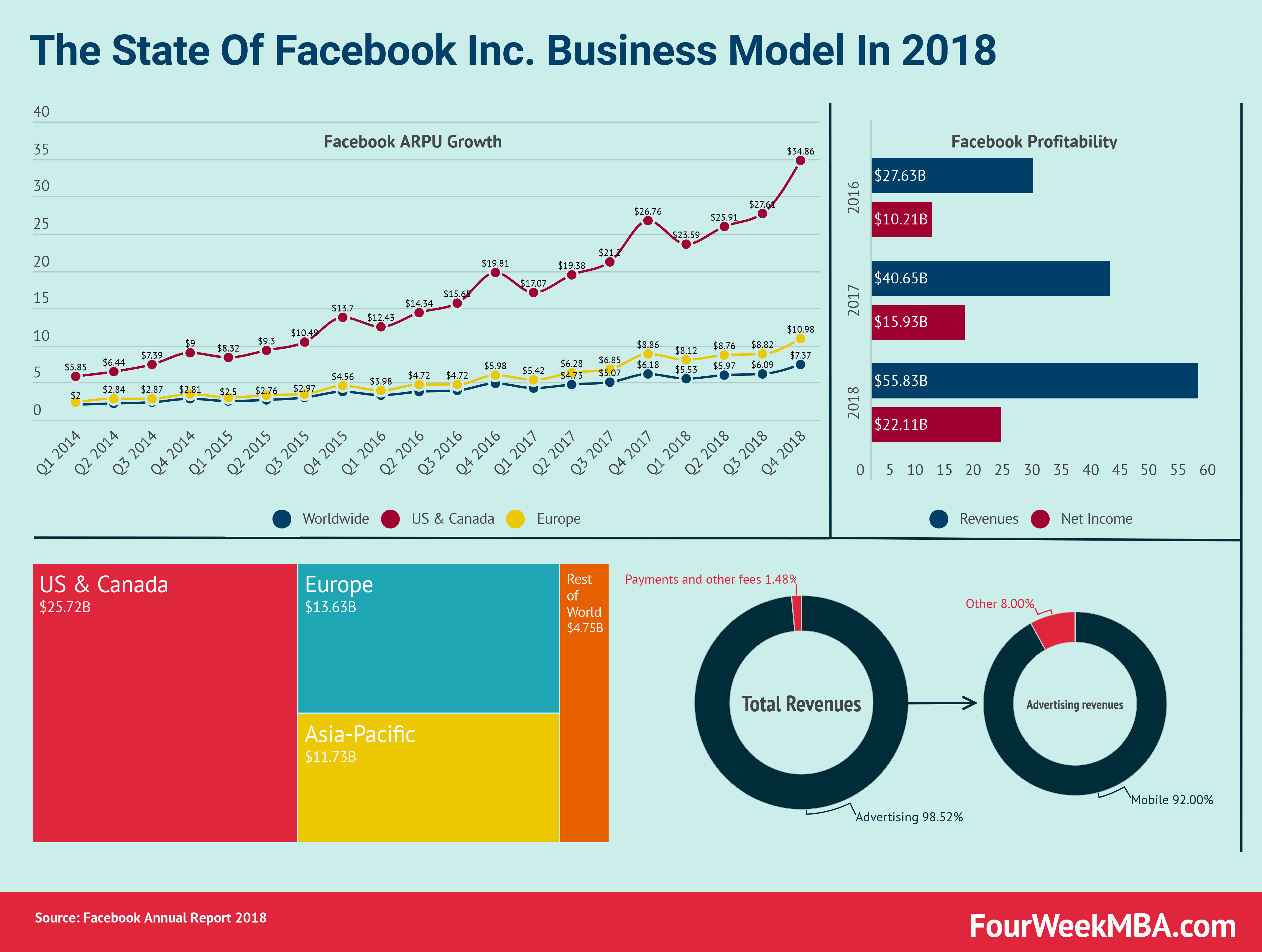 The year 2018 hasn’t been an easy one for Facebook Inc. Going through several scandals, Mark Zuckerberg was called to Congress, and over and over again we heard the story of a growing number of users leaving the platform.

For that matter in this report, we dissect the critical numbers of Facebook for the whole year 2018 to understand the status of its business model.

In a previous report I’ve already noticed how nonetheless all, looking at Facebook numbers through the third quarter of 2018, the overall business was looking good.

As Facebook monetizes its users via advertising, it needs to be able to have people going back each day and use it regularly every month. For that matter, Facebook tracks a metric called MAU, or monthly active users.

By looking at the MAU over the years we can notice how growth has stalled in the US & Canada, it kept growing a bit in Europe, and it increased substantially worldwide. The worldwide MAU grew to 2.32 billion users in 2018, which was a 9% growth compared to 2017.

Even if that is a good sign for the platform, those users are monetized less by Facebook, compared to the US and Canada.

Even though growth stalled in the US & Canada ARPU or average revenue per user, another key metric, has grown substantially. We’ll see what might have driven growth in the paragraphs below.

Breaking down the numbers

The user base growth has been primarily driven in the Asia-Pacific and Rest of the World.

As pointed out on Facebook Annual Report for 2018 “We generate substantially all of our revenue from advertising.”

Thus, instead of diversifying its business model, Facebook is becoming even more reliant on advertising, which has driven over 98% of its overall revenues in 2018.

More precisely marketers pay advertising based either in impressions or on a set of actions taken by users delivered via Facebook (clicks, share, likes and so on).

The growth of advertising revenues in 2018 can be broken down as:

The primary factors affecting that growth were:

One thing to notice, it’s hard to say right now whether the increased budget was due to marketers willing to spend more on Facebook advertising inventory, or it happened because Facebook ads got more expensive. Understanding that is important.

Indeed, I analyzed already how Facebook organic reach, in 2018, has fallen and I took as a paradigm for that, the referral traffic that a popular publication, called Slate:

Yet as the organic reach from Facebook fell, in order for publishers and marketers to reach their desired audience they had to buy more advertising inventory.

Therefore, it’s hard to say yet whether an increased budget was due to that phenomenon. One signal might point out that marketers did increase willingly their budget, as Facebook got more expensive (13% more expensive). However, not as much as it did back in 2017 (29% more expensive than the previous year).

A question mark remains here: if marketers are spending more simply because Facebook advertising got more expensive, can we expect this to last?

A second element, which is hard to dissect from official numbers is about Instagram. Indeed, as Facebook doesn’t report the breakdown of Instagram numbers is hard to say how much it contributed to its overall bottom line. However, we can assume it did big time.

Uber And Lyft Business Models In A Nutshell

More than a comparison between Uber and Lyft, this is a set of thoughts and observations that might help understand...