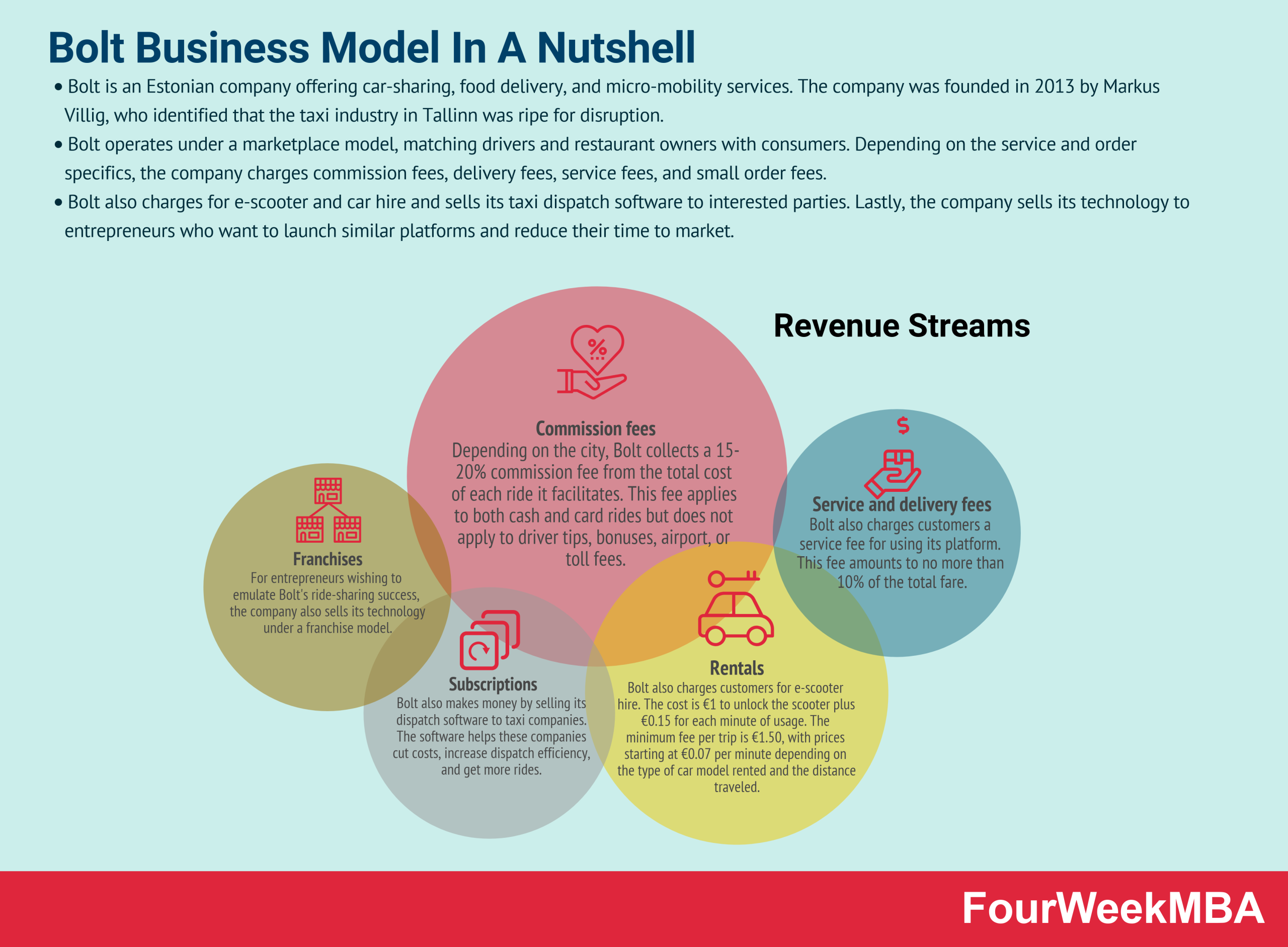 Bolt is an Estonian company offering car-sharing, food delivery, and micro-mobility services. The company was founded in 2013 by Markus Villig.

The inspiration for Bolt came after Villig experienced difficulty booking a taxi online after attending a Garage48 hackathon event. Despite also studying for his high school exams, he immediately began work on a new platform to revolutionize the taxi industry in the Estonian capital Tallinn. At the time, the industry was dominated by taxi companies using an outdated model where rides could only be booked through an operator in a central station.

Villig then developed an early prototype for his idea with a €5,000 loan from his parents. He also approached taxi drivers directly to gauge interest, with around 100 signing up to be featured on the platform. The platform, known as mTakso, was launched in August 2013 and later rebranded as Taxify – an aggregator of local taxi services.

Many taxi drivers were initially hesitant to sign up for the service, but Villig worked hard to drum up support over the next six months. As the app began to gather momentum, Villig hired brother Martin and freelance software developer Oliver Leisalu. The entire code base of the app was rewritten, allowing consumers to see a driver’s location in real-time.

Bolt raised €1.4 million in December 2014 and started to scale very quickly. This was facilitated by expansion into other European countries and the ability for any driver to join the platform regardless of background or experience level. September 2018 marked a pivotal month for the organization. After introducing e-scooters to the streets of Paris under the brand name Bolt, Taxify became known as Bolt a few months later.

Bolt posted revenues of €221.4 million in 2020. Unlike similar ride-sharing providers, the company emerged relatively unscathed from the coronavirus pandemic after expanding into food delivery in late 2019.

Essentially, Bolt operates under the marketplace business model as a connector of restaurants and drivers with consumers.

We will explain this model in more detail below.

Depending on the city, Bolt collects a 15-20% commission fee from the total cost of each ride it facilitates. This fee applies to both cash and card rides but does not apply to driver tips, bonuses, airport, or toll fees.

The company also charges restaurants a similar commission for every order they receive through the Bolt platform. This commission is undisclosed, though fees from similar companies range anywhere between 20 to 35%.

Bolt also charges customers a service fee for using its platform. This fee amounts to no more than 10% of the total fare.

For those ordering food, a delivery fee is also charged depending on geographic location. A small order fee is also applicable to food orders less than the minimum order price.

Bolt also charges customers for e-scooter hire. The cost is €1 to unlock the scooter plus €0.15 for each minute of usage.

Cars can also be hired through the Bolt Drive program, a low-cost, safe, and convenient car-sharing solution.

The minimum fee per trip is €1.50, with prices starting at €0.07 per minute depending on the type of car model rented and the distance traveled. Fuel, parking, and insurance are all included, but a reservation fee will also be charged if the length of the hire exceeds 15 minutes.

The company offers a free 30-day trial period, after which an undisclosed fee is charged.

For entrepreneurs wishing to emulate Bolt’s ride-sharing success, the company also sells its technology under a franchise model.

Since these entrepreneurs take advantage of the Bolt brand and innovation ability, it can be assumed the company takes a portion of any subsequent revenue.