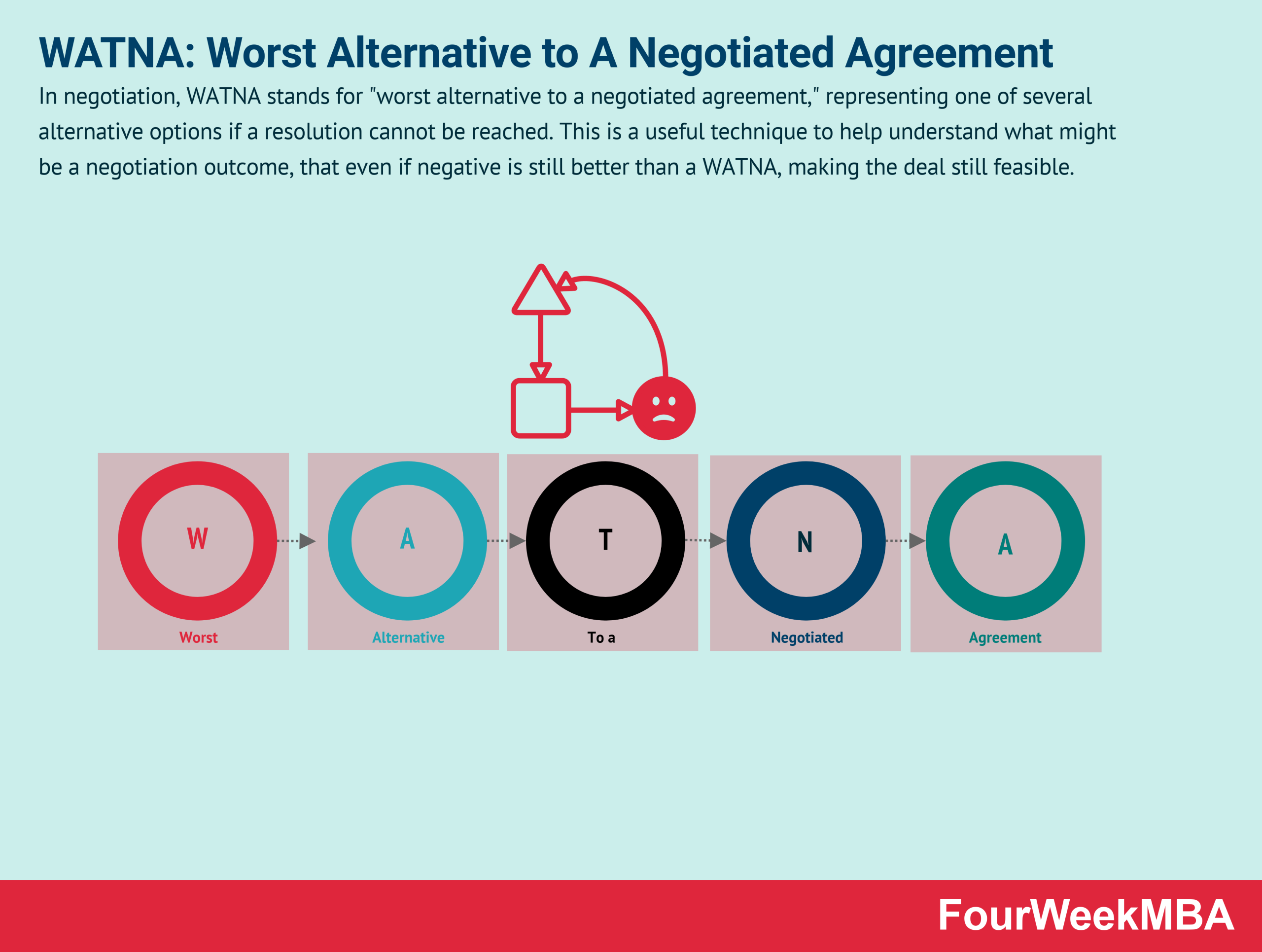 In negotiation, WATNA stands for “worst alternative to a negotiated agreement,” representing one of several alternative options if a resolution cannot be reached. This is a useful technique to help understand what might be a negotiation outcome, that even if negative is still better than a WATNA, making the deal still feasible.

WATNA is an acronym for the “worst alternative to a negotiated agreement”. It describes the worst result a party could achieve if the negotiation process failed.

The WATNA is an important part of the negotiation process. In a book describing the principles of negotiation, authors Matthew P. Guasco and Peter R. Robinson note that “sometimes, the deal on the table is acceptable because it is less bad than your WATNA, i.e., you are minimizing loss or making the best of a bad situation.”

Put differently, the WATNA provides a benchmark that settlement offers can be evaluated against. It gives one party the confidence to accept an outcome that is far from ideal but, relatively speaking, is not the worst possible outcome.

Preparing a WATNA for use in a negotiation

Before a WATNA is prepared, each party must decide how likely that particular outcome will be.

Both parties need to be realistic. If either could achieve their ideal outcome with a minimum of fuss, there would be no need for negotiation in the first place. An organization without a clear WATNA (or BATNA) will enter a negotiation with false and unrealistic expectations.

The worst alternative to a negotiated agreement imbues each party with a sense of purpose at the negotiating table. With greater awareness of their respective worst-case scenario, each party gains more clarity as a result.

When is a WATNA most effective?

Sometimes, one party will be forced to cut its losses during a negotiation. This usually occurs in scenarios involving a high degree of uncertainty.

For instance, an unemployed person in discussions with a hiring manager is entering the negotiation in a weak position. The WATNA of the unemployed person may involve being overlooked for the job and having to declare bankruptcy.

However, we noted in the previous section that a WATNA could be used to give a negotiating party more purpose. In this example, purpose means the unemployed individual strengthens their position to reduce uncertainty.

Perhaps the individual applies for as many job as possible and receives a bunch of offers. Armed with a list of comparable jobs, they then become better equipped to use new insights as a negotiation tool during the next job interview.

With greater purpose, the job seeker is in a far stronger position. Instead of bankruptcy, the WATNA becomes successful employment in a low-paid job. While this is a long way from the most desirable outcome, the individual has nevertheless used a WATNA to strengthen their position. As Guasco and Robinson noted, the deal on the table is simply less bad than the original WATNA.

At some point in the future, the position of the person who is now employed may become strong enough to be designated as their BATNA.