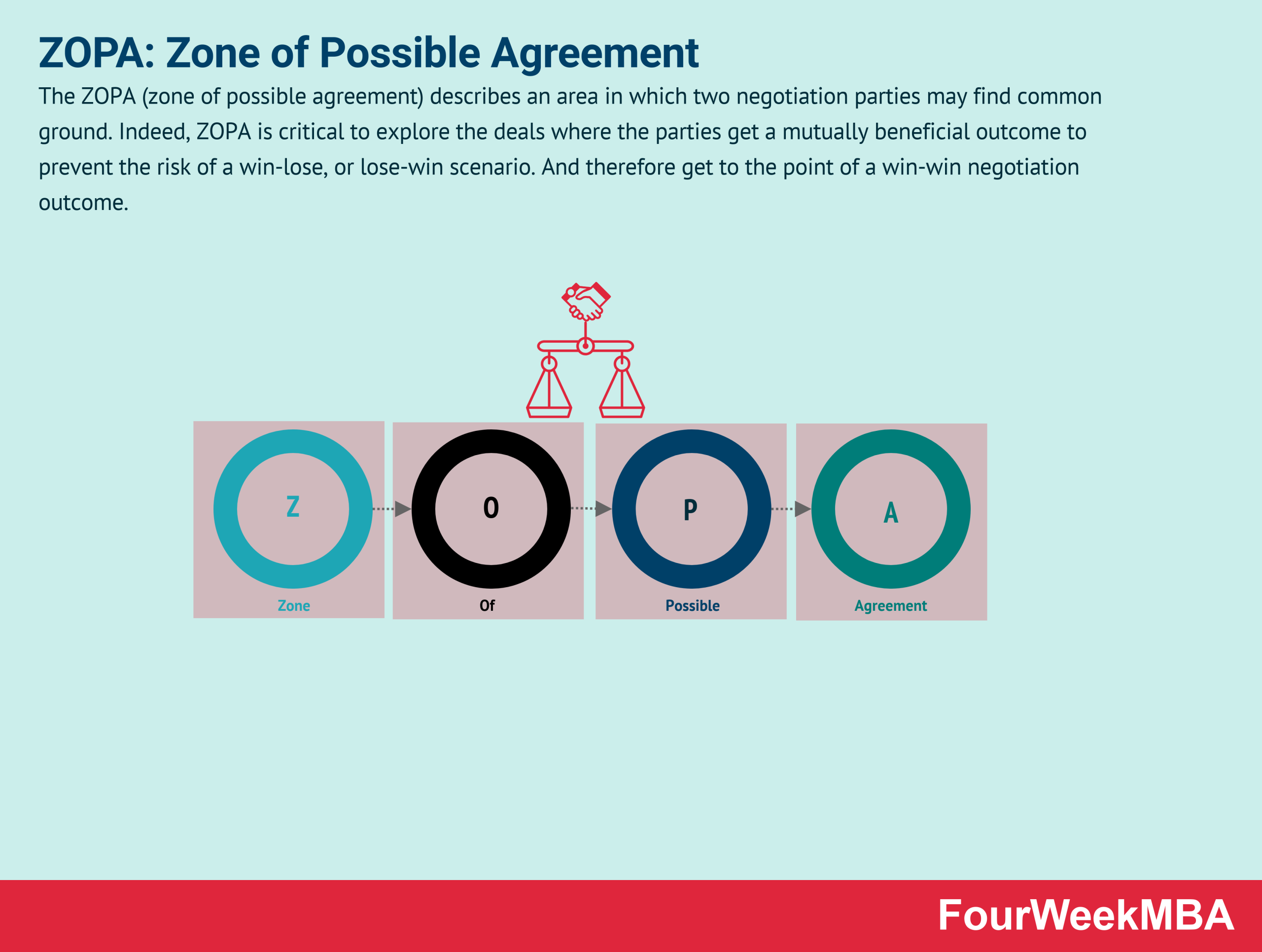 The ZOPA (zone of possible agreement) describes an area in which two negotiation parties may find common ground. Indeed, ZOPA is critical to explore the deals where the parties get a mutually beneficial outcome to prevent the risk of a win-lose, or lose-win scenario. And therefore get to the point of a win-win negotiation outcome.

In a typical business negotiation, two polar-opposite errors are commonplace:

The first error is often referred to as an “agreement trap”. This describes a tendency for either party to agree to a deal that is inferior to their BATNA, or their best alternative to a negotiated agreement.

The second error occurs when both organizations walk away from a mutually beneficial outcome. In this case, negotiators fail to compromise on certain issues to obtain a satisfactory deal.

Avoiding these unfortunate circumstances can be achieved by the identification of a ZOPA – or zone of possible agreement. This zone encompasses a range where deals are made that both parties find acceptable.

Foundational elements of the ZOPA

The ZOPA can only be properly understood by each party determining its respective:

The ZOPA can only exist if there is an overlap between the walk-away positions of each party. Otherwise, negotiations are likely to fail.

The ZOPA in negotiation

In theory, parties entering a negotiation with a BATNA and walk-away position should be able to successfully reach an agreement. When a negotiator learns the bottom line of the opposing party, they can quickly determine the ZOPA and use collaborative techniques to close the deal.

However, the negotiation is often stymied when one party fails to properly define its BATNA or has no awareness of the other side’s BATNA.

This leads to varying degrees of posturing. Since better alternatives are equated with higher bargaining power, some exaggerate or fabricate their position to get what they want. However, the result of this posturing is a failure to identify the ZOPA and come to an amicable agreement.

It’s important to remember that in most negotiations, a ZOPA does exist. But uncertainty around the value of alternatives causes both parties to be unrealistically optimistic or pessimistic about finding it.

The ZOPA in integrative or distributive negotiations

Integrative negotiations involve the creation of value, otherwise known as “enlarging the pie”.

This occurs when both parties have shared interests and can make trade-offs on certain issues to create mutual value. Here, the ZOPA allows both parties to “win” by walking away with a different piece of the same pie – even if neither walks away with everything they originally wanted.

In this scenario, it is much more difficult to find a mutually acceptable solution because both sides want to claim as much of the pie as possible. Unlike an integrative negotiation, there is no ZOPA where interests overlap. It is very much a zero-sum game, where one party must lose so that the other can win.

Ultimately, the only way that distributive negotiations can be successful is by splitting the pie down the middle. Using this ZOPA, each party wins half of what they wanted and loses the other half.