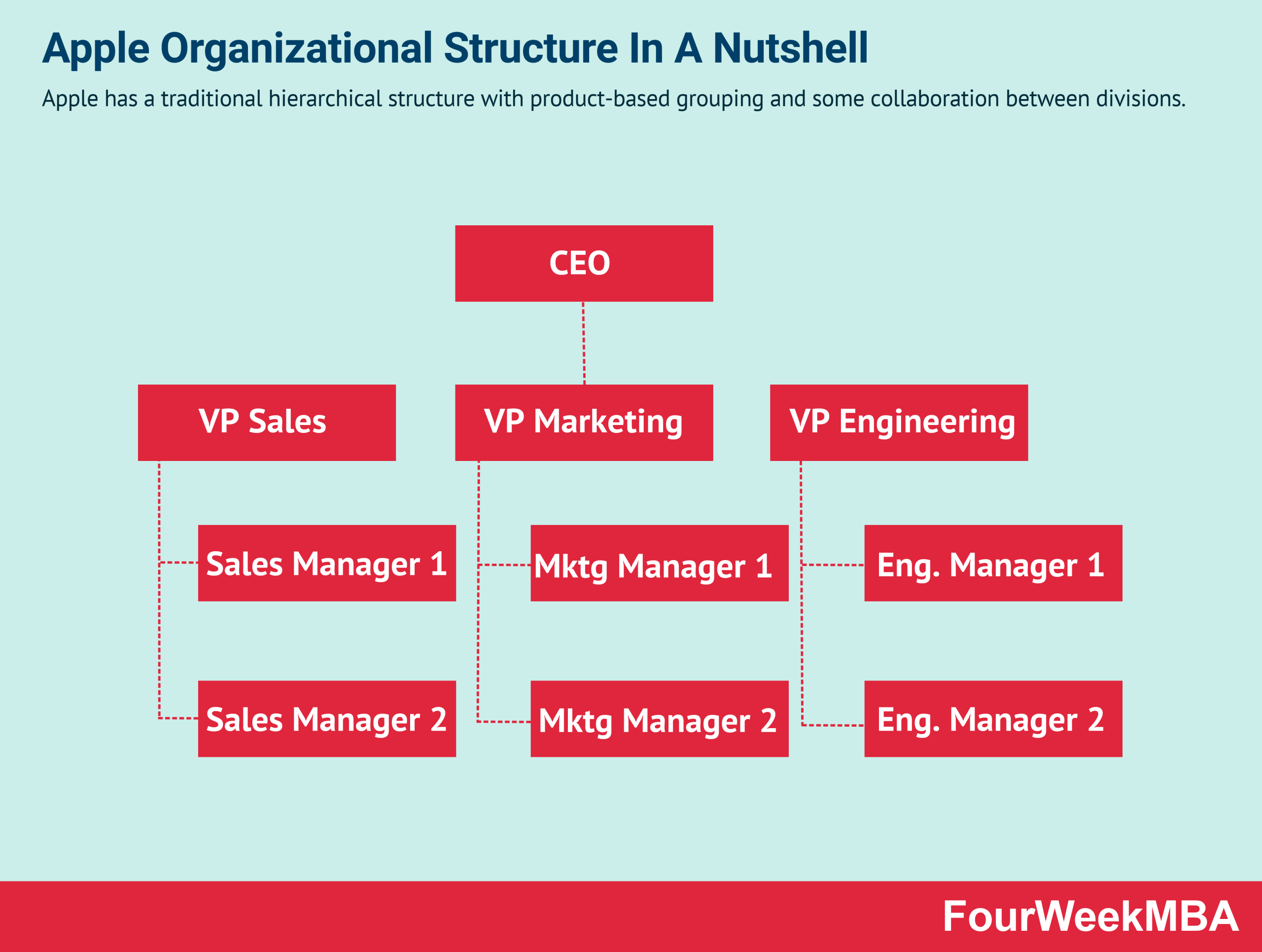 Apple has a traditional hierarchical structure with product-based grouping and some collaboration between divisions.

Former CEO Steve Jobs is credited with transforming Apple from a struggling company to one dominating the world with its innovative products.

How exactly was this accomplished?

When Jobs returned to Apple in 1997, the company had a typical product-based structure divided into business units with their own P&L responsibilities. However, Jobs noted that this approach hampered innovation.

He laid off each business unit general manager and put the entire company under one P&L, effectively combining unrelated units into one functional organization. Under this new arrangement, product managers could work insulated from short-term market pressures. They were also encouraged to share their work with other divisions to ensure innovations were not duplicated.

Jobs argued that the function-based structure required two crucial elements. First, product managers had to be product experts and not rely on others for decision-making expertise. Second, senior research and development personnel should receive a bonus based on the performance of the entire company – not simply on their own products. This gave them the freedom and impetus to focus on innovation not involving the iPhone.

Today, the company combines the functional and hierarchical structure instituted by Jobs with the somewhat more collaborative approach implemented by successor Tim Cook.

But there are also some other important characteristics to consider. Following is a look in general terms at the Apple corporate structure.

Apple is a predominantly hierarchical organization. In the past, every strategic decision would have to go through Jobs. When Cook took the helm, however, he introduced a more collaborative approach between managers and employees.

To address business needs in the context of functional units, Apple employs several senior vice presidents. For instance, there are senior vice presidents for worldwide marketing, design, finance, and retail, among others. This level of management has to report to the CEO but is given more autonomy than they were under Jobs.

A functional structure is more suited to the holistic culture of a compact start-up and is an uncommon in a company the size of Apple. But this approach ensures there is no competition for resources between product division heads. Furthermore, it allows Apple to neglect short-term financial targets when developing resource-intensive products.

Ultimately, this helps the company address specific product components before releasing them to the market. It also helps Apple evaluate marketing or manufacturing requirements.

Under Jobs, hardware and software teams would have to run their ideas by the CEO with little interaction between the teams themselves.

The development of each Apple product now involves an intensive collaborative effort between various groups and divisions. In other words, some degree of functional rigidity has been sacrificed to enable creative and efficient innovation.

Starbucks Organizational Structure In A Nutshell

Starbucks follows a matrix organizational structure with a combination of vertical and horizontal structures. It is characterized by multiple, overlapping...