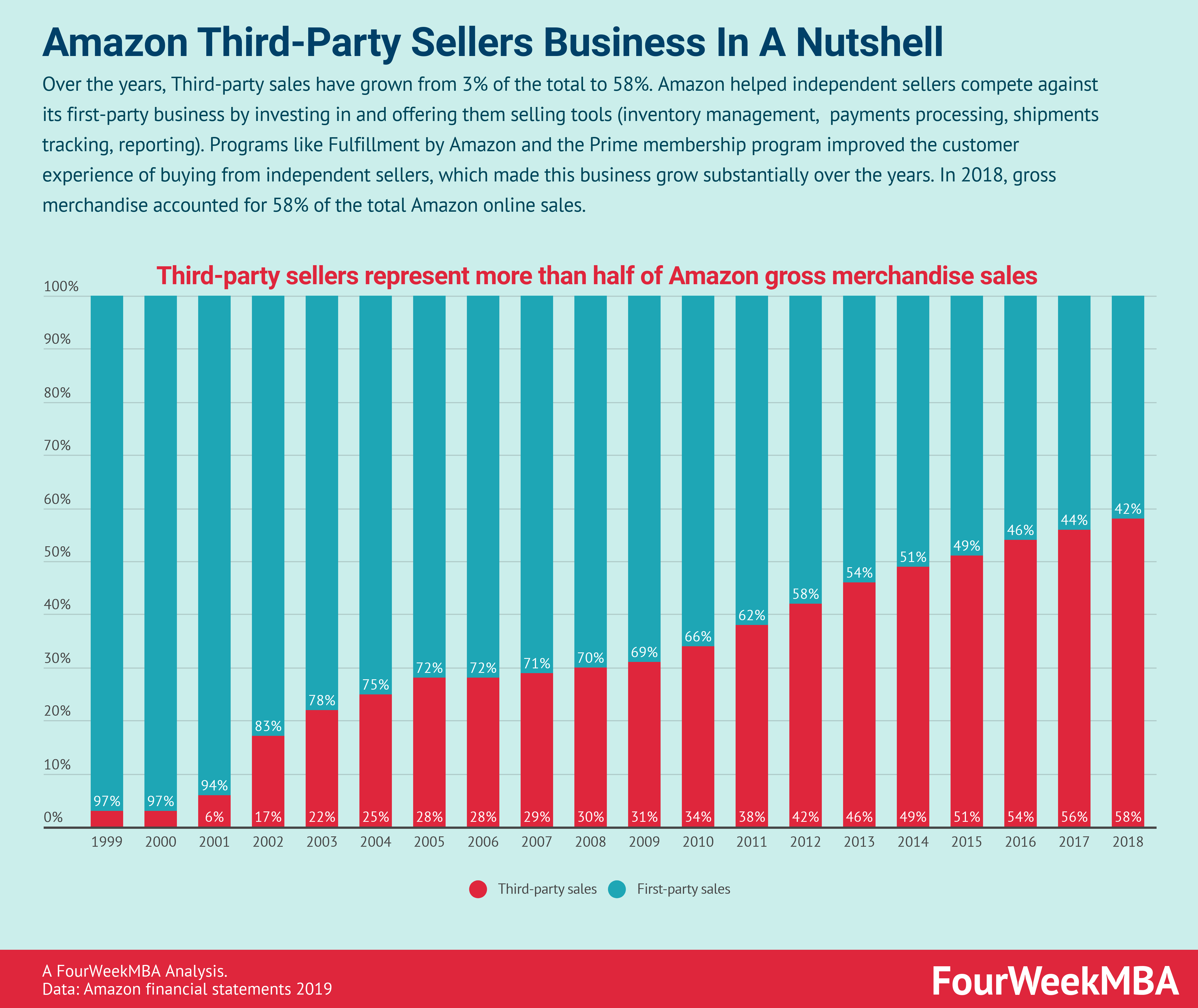 When can we call a business model a platform?

To answer this question we can look at the Amazon case study and how it transitioned over the years from e-commerce to a platform-first business model.

And how that platform business spurred the growth of other business units (AWS, advertising, third-party services, Prime) who might have not been possible without a solid platform business in the first place, and it all starts with building up critical mass to enable network effects.

In 2018, independent third-party sellers (mostly small– and medium-sized businesses) sold 58% of the merchandise on the Amazon platform.

Opposed to Amazon retail’s own first-party sales with the remaining 42%. As Amazon has put it “Third-party sellers are kicking our first-party butt. Badly.“

What are some elements to take into account to understand how Amazon transitioned toward a platform-first business model?

Amazon selling tools and the power of free tools

Amazon favored the transition toward a platform business model by building the selling tools (inventory management, processing payments, tracking shipments, reports) which made Amazon‘s website, not just e-commerce where they could distribute their product, but a management system they could rely on.

Fulfillment, Prime and the flywheel effect

When launching a platform business model that relies on third-party sellers, there are two major issues (among others).

First, you can’t guarantee the quality of the service (in this case delivery) if you don’t control the process.

Second, in the long-run, it becomes hard to have loyal customers, as transaction costs might make the repeat purchase not convenient to those shoppers, thus making a digital platform lose its initial competitive advantage over physical pairs.

How did Amazon, over the years, face those issues?

After many trials and errors, two programs in combination helped Amazon transition toward a successful platform model.

Fulfillment by Amazon and Prime in combination substantially improved the customer experience of buying from independent sellers, thus spinning the Amazon flywheel.

As Amazon highlighted in its 2018 shareholders’ letter, at the time it was not an easy decision to make, as both programs implied huge investment and financial risks and those went through many internal debates and discussions, so at the time their success was not given for granted.

As explained in Amazon leadership principles, and how Jeff Bezos made decisions at the time, the Amazon leadership team used “intuition and heart, nourished with optimism” to make such a decision, which in hindsight seems almost trivial.

Will Amazon keep its platform business model as it is?

A platform business model was extremely effective to help Amazon scaling up in an era where the web was still an early-stage ecosystem.

Thus, a platform business back then (the late 1990s) up to the 2010s has proved an incredible model for traction, scale, and domination.

Whether Amazon will keep its platform as primarily serving third-party sellers we can’t know for sure.

For instance, Amazon might be able to revert this process by internalizing more brands.

In fact, as third-party sellers provided over the years incredible data about what people want, Amazon, in theory, has the power to have those items manufactured and sold with Amazon’s brand, thus increasing again the portion of first-party products.

Will this happen in the coming years? We’ll see.

Is a platform business model still the most viable solution today?

We’re living in an era where arising competition on the web, its growing maturity, and penetration to the whole world, have also changed the whole digital business landscape.

Building a platform business today might not be an easy option as the consolidated platforms (Google, Amazon, Apple, Facebook, and a few other brands) are acting as winners who took it all, thus locking-in distribution pipelines with their algorithms, and working as gatekeepers.

In this scenario, building up a successful platform business might have become a risky option, initially.

Thus, a cheaper option is to bootstrap the business to product-market fit first, then evaluate whether a platform business helps better serve existing customers, and at the same time expand the customer base.

In the end, Amazon itself took years to transition to a full-fledged platform business.

Will Amazon convert in a private label platform?

As a platform business model, a lot of value is in the data and knowledge acquired by the platform over the years.

As Amazon has grown as a platform over the years, it has become tempting to make its own brands prevail on the platform. Yet, Amazon’s mission is also about price, convenience and variety.

Therefore, we could argue that the third-party sellers’ ecosystem is what made Amazon successful. Thus, the balance to keep the platform successful is also about making this ecosystem survive.

The balance is tricky and can be broken easily. That can put Amazon in a difficult position. First, because third-party sellers might migrate on other platforms that do not have interests (for now) in owning brands because it’s not their core business model (see the Google move in opening its Shopping Platform).

Second, regulators might decide to break up the platform from the brands. Just like in telecommunication, if you own the pipeline, you can’t sell the product, unless of course, those are two separate businesses. Amazon as a platform might become a separate entity compared to Amazon as a set of owned brands.

Why then Amazon is pushing on its private labels over the years? As a platform grows into an established brand, it becomes a key element of its long-term success the ability to be recognized as such.

Some elements that make this strategy appealing to Amazon are:

A digital channel is a marketing channel, part of a distribution strategy, helping an organization to reach its potential customers...