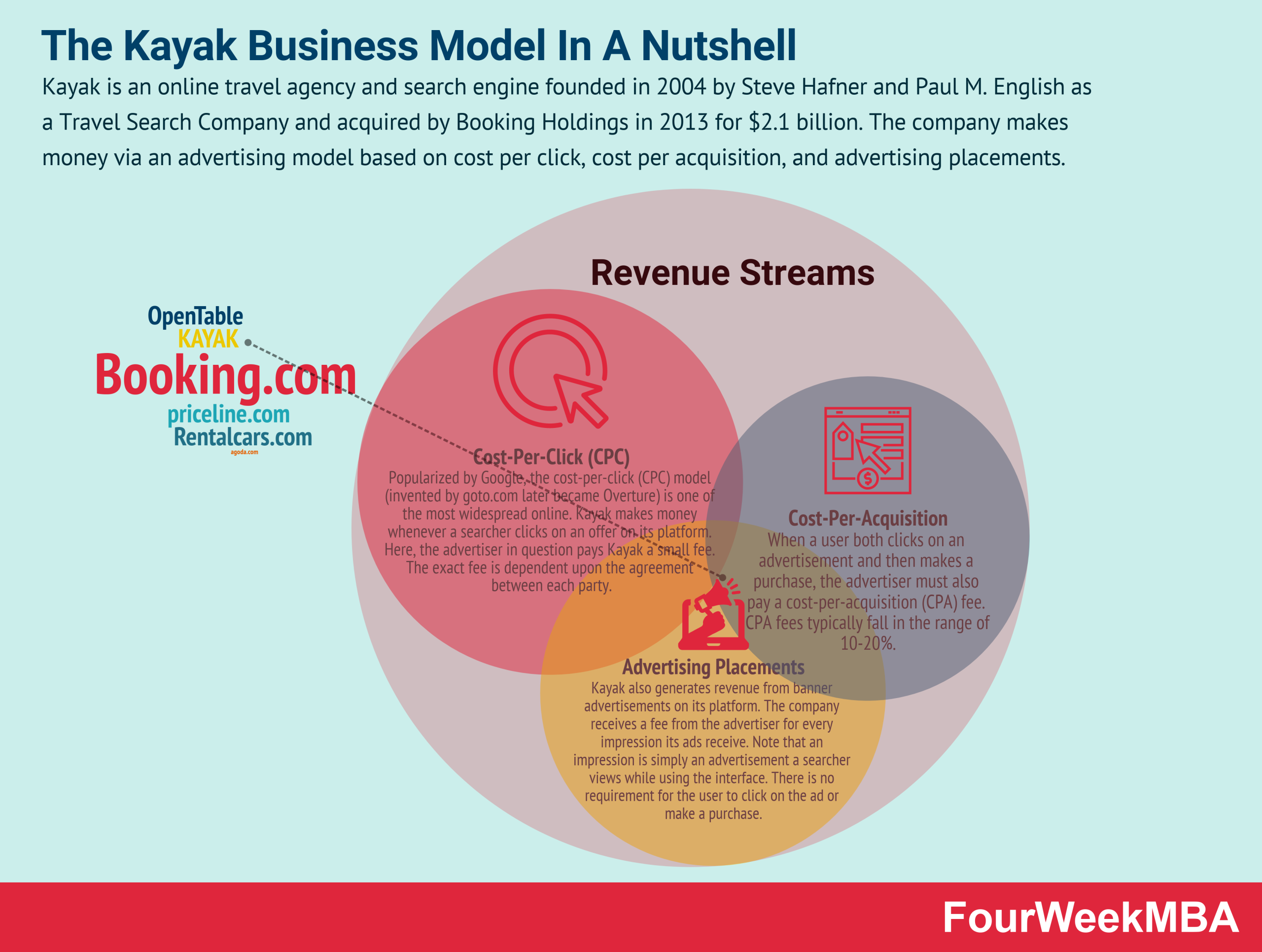 Kayak is an online travel agency and search engine founded in 2004 by Steve Hafner and Paul M. English as a Travel Search Company and acquired by Booking Holdings in 2013 for $2.1 billion. The company makes money via an advertising model based on cost per click, cost per acquisition, and advertising placements.

Kayak is an American online travel agency and search engine. The platform was founded in 2004 by Steve Hafner and Paul M. English as Travel Search Company, Inc. Through a mobile app and website, users can search Kayak to compare rates between car rentals, flights, and hotels.

After changing its name to Kayak in 2005, the company received $196 million in financing and went on to make a series of acquisitions. These included German travel search platform Swoodoo and online travel agency SideStep.

In 2013, Kayak was acquired by Booking Holdings – which at the time was known as Priceline.com – for $2.1 billion.

Kayak operates on a CPC model. Let’s expand on this model below.

Popularized by Google, the cost-per-click (CPC) model (invented by goto.com later became Overture) is one of the most widespread online.

Kayak makes money whenever a searcher clicks on an offer on its platform. Here, the advertiser in question pays Kayak a small fee. The exact fee is dependent upon the agreement between each party.

When a user both clicks on an advertisement and then makes a purchase, the advertiser must also pay a cost-per-acquisition (CPA) fee. CPA fees typically fall in the range of 10-20%.

This so-called distribution revenue is paid by travel companies, including airlines such as JetBlue and car rental agencies such as Hertz. The airline industry is particularly profitable for Kayak, with estimates suggesting it derives a third of its total revenue from the source.

Kayak also generates revenue from banner advertisements on its platform. It can charge a premium rate for ad placement because of its proven ability to generate high numbers of leads.

The company receives a fee from the advertiser for every impression its ads receive. Note that an impression is simply an advertisement a searcher views while using the interface. There is no requirement for the user to click on the ad or make a purchase.

Kayak now operates in dozens of countries and continues to acquire hotel aggregation businesses in significant European and Asian markets.

This allows it to increase revenue by maintaining its status as a trusted and comprehensive travel service. With more consumers flocking to the platform, travel companies become incentivized to use the platform to remain competitive.