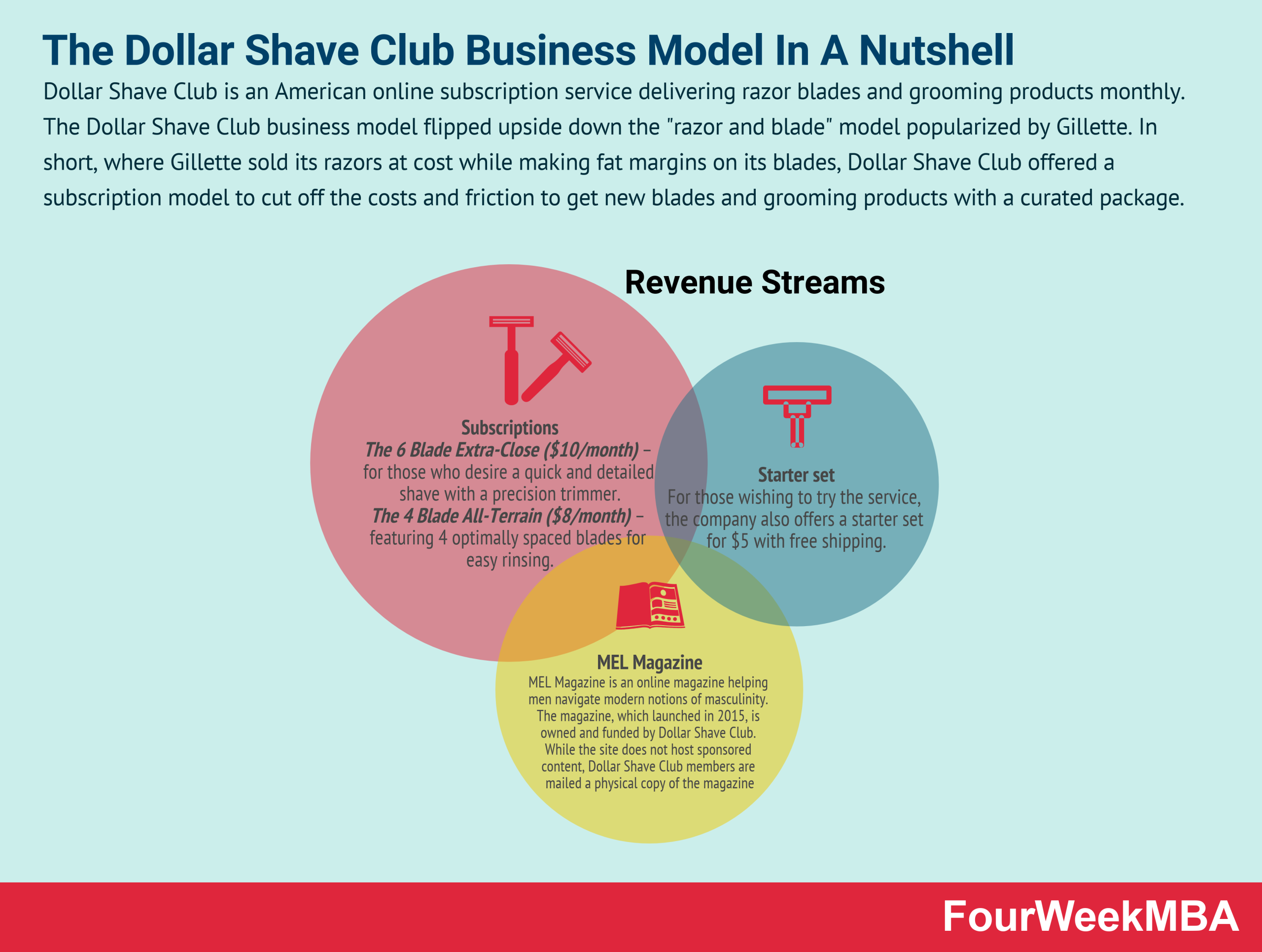 The company was founded by Mark Levine and Michael Dubin in 2011. Dubin in particular was frustrated at the expense associated with purchasing new razor blades. He also noted that having to frequently replace used blades was inconvenient and time-consuming.

To test the viability of the idea, a now-infamous explainer video was uploaded in March 2012 with just $4,500 in funding. The video quickly went viral, enabling Dollar Shave Club to make $4 million in revenue during its first year in operation. Three years later, revenue had increased to $65 million and the product range increased to help men look, feel, and smell their best.

When it comes to creating new disruptive business models, the process is simple. Take the steps customers make with existing, dominating players and understand which steps can be “decoupled” from the process, thus building a whole company on top of that.

Perhaps in the case of Dollar Shave Club, as we’ll see, Gilette had become an expensive option for many new generations, where the blades cost had become frustratingly high, and Gillette itself was incentivized to launch newer and newer models, with more and more blades, so that customers could continuously upgrade to these.

Dollar Shave Club saw the opportunity by flipping the Gillette model upside down.

Flipping The Razor and Blade Model upside down

As the story goes, King Camp Gillette, founder of Gillette, had popularized the model for which blades would be sold at high margins, while razors would be sold at cost. Apparently, Gillette might have not used that model straight on, instead of as its patents were coming to expiration, to gain as much market shares, and maintain competitiveness, it started to roll out at scale the razor and blade strategy, where razors would be given almost away, to create demand for the blades.

This model is extremely important as it has also been used by many tech companies to drive demand for the ancillary products sold on their platforms, marketplaces.

The Razor and Blade model which Gillette mastered over the years has become a standard in many industries. Also, tech companies have learned how to use it. Perhaps, Apple uses a reversed version of it, where the iPhone is sold instead at high margins, as apps were mostly free.

Other players like Amazon or Microsoft also use the razor and blade model. For instance, Amazon sells its Kindle devices at cost while making money on the sales of ebooks and subscriptions through its digital products marketplace. Microsoft, with Xbox, sells the console at cost (or perhaps at loss) while making high margins on the sale of games.

In the same way, Dollar Shave Club reduced the cost, friction, and stress of having to deal with continous upgrades, with a simple subscription model, where consumers could get a curated package of blades and grooming products. The model worked wonders!

Each subscription is tailored to the personal grooming needs of individual customers.

In terms of razorblade subscriptions, there are two options:

For those wishing to try the service, the company also offers a starter set for $5 with free shipping.

Two weeks after the starter set is shipped, the company will periodically send the consumer razor refills. This service is charged at $20 every 2 months. Customers can alter the frequency of refills according to their needs, or cancel the service entirely.

They may also add or remove other products to their regular delivery, including hair gel, moisturizer, toothpaste, deodorant, shampoo, conditioner, and hand cream.

CEO Dubin sees the magazine as a way for the Dollar Shave Club brand to “develop a deeper connection with its customer base, or member base in our case.” This deeper connection fosters a stronger sense of community among members.

Consumer trust in the brand is also increased because MEL Magazine does not produce content that sells Dollar Shave Club products directly. Instead, content is geared towards shaping the sort of consumer who would be motivated to spend money on a razor or self-care subscription.

Read Next: Subscription Business Model, How Does Birchbox Make Money.

How Does Birchbox Make Money? The Birchbox Business Model In A Nutshell

Birchbox is an online American monthly subscription service for skincare, perfume, and other cosmetic items. Bitchbox was among the first...