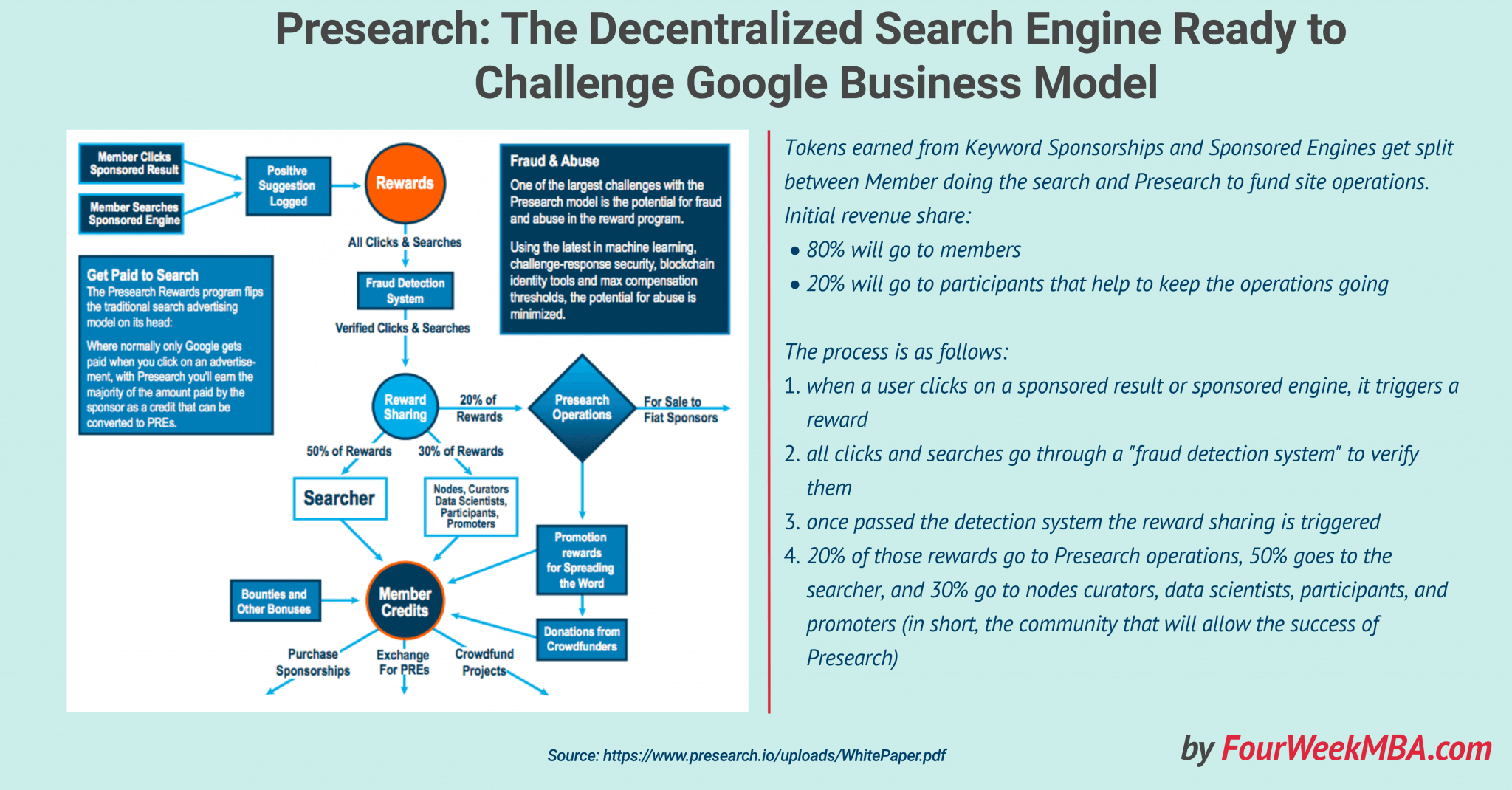 Presearch will be a search engine based on the blockchain which promises to revolutionize search.

In the beta release, Presearch is more of a search tool than a search engine.

In fact, as of the time of this writing, you can download Presearch as a Google Chrome extension to make it your default page. In the beta phase, Presearch counts to gather at least 100,000 users.

As Beta tester, you will get paid in its cryptocurrency (PRE), which as of now has over $34 million in market cap. In short, each PRE is worth $0.22. For each search you make, Presearch gives you 0.25 PRE (5 cents at today’s rate).

Of course, if this cryptocurrency will rise in value, each search would be worth more. In short, not only your searches will be private, but you will also be rewarded for building up the web.

By default you have Google as a search engine, to minimize switching costs. However, you can customize the search engine experience:

As the web consists of three primary sources of traffic:

As search has become critical (each day more than five billion queries go through Google), search engines have become the gatekeepers of information. According to Presearch white paper, besides few exceptions in search (such as DuckDuckGo), very few are innovating, except organization wl-no-link" itemid="http://data.wordlift.io/wl0166/entity/google">Google.

Having one company in this position of extreme power is particularly troublesome because it enables them to operate in a very opaque, top-down, almost-oligarchical manner.

Search as of now can be broken down into four critical aspects:

Google is becoming an answer engine, which is vastly different than the founding of the platform. As an answer engine, there is increasingly only the need for a single, definitive answer. As it approaches that horizon, it is important to think about the implications of having one go-to source for truth on the Internet; especially in light of recent efforts to censor content under the guise of ‘fake news’ and the thought of an increasing monopoly position and how much trust is being put in one entity.

Presearch is a multi-phase project:

Phase One: 1. The legal entity is a Canadian corporation, Presearch.org Global Limited., which was incorporated on July 7th, 2017. 2. There is a single shareholder for easy voting and transition to Phase Two. We anticipate that this structure will persist for an estimated 12-18 months until that transition. 3. We will undertake all measures possible to ensure a clean and timely transition to Phase Two, including the following guiding principles: a. No accumulation of significant debt or long-term ongoing liabilities b. Single shareholder to ensure total responsibility for project c. No assignment of IP to any entity other than Presearch 4. This company will undertake the early-adopter token sale and operate from that revenue. Phase Two: 1. Establishment of the community charter, directors and governance / consensus model. 2. Establishment of a permanent foundation in a country and region with the utmost respect for privacy and data integrity, with favorable tax and regulatory environment, and a stable and freedom-respecting political climate. 3. Transition of all IP and assets to the foundation. 4. This foundation will then undertake the general public token sale and operate from the revenue generated by the sale of sponsorships.

The transition toward complete decentralization:

This transition may take significant time, or may be surprisingly quick. At this point, we do not want to set the expectation that it will be quick, and for the purposes of this white paper remain primarily focused on the vision for a decentralized search engine while leveraging the early model for the search tool described in this document.

In other words, where traditional search engines keep all the money Presearch gives most of it back to users while retaining 20% to run its operations. In fact, in 2017 Google made over $95 billion from advertising alone. So how the Presearch reward system work?

How does Presearch rewarding system work?

Tokens earned from Keyword Sponsorships and Sponsored Engines get split between Member doing the search and Presearch to fund site operations.

The process will be as it follows:

In which way is Presearch transparent?

According to the white paper Presearch will share with users three kinds of critical data for search:

How will Presearch make money?

Presearch will make money through keywords, bids, and relevance score – members can rate results via a browser extension.

What types of sponsorship are run?

How does Presearch prevent fraud?

Fraud & Abuse One of the largest challenges with the Presearch model is the potential for fraud and abuse in the reward program. Using the latest in machine learning, challenge-response security, blockchain identity tools and max compensation thresholds, the potential for abuse is minimized.

Will Presearch succeed? Whether or not it will succeed will also depend upon your effort to make it work. Why not give it a try? Presearch it!

However, I’d start from its White Paper to really understand it.