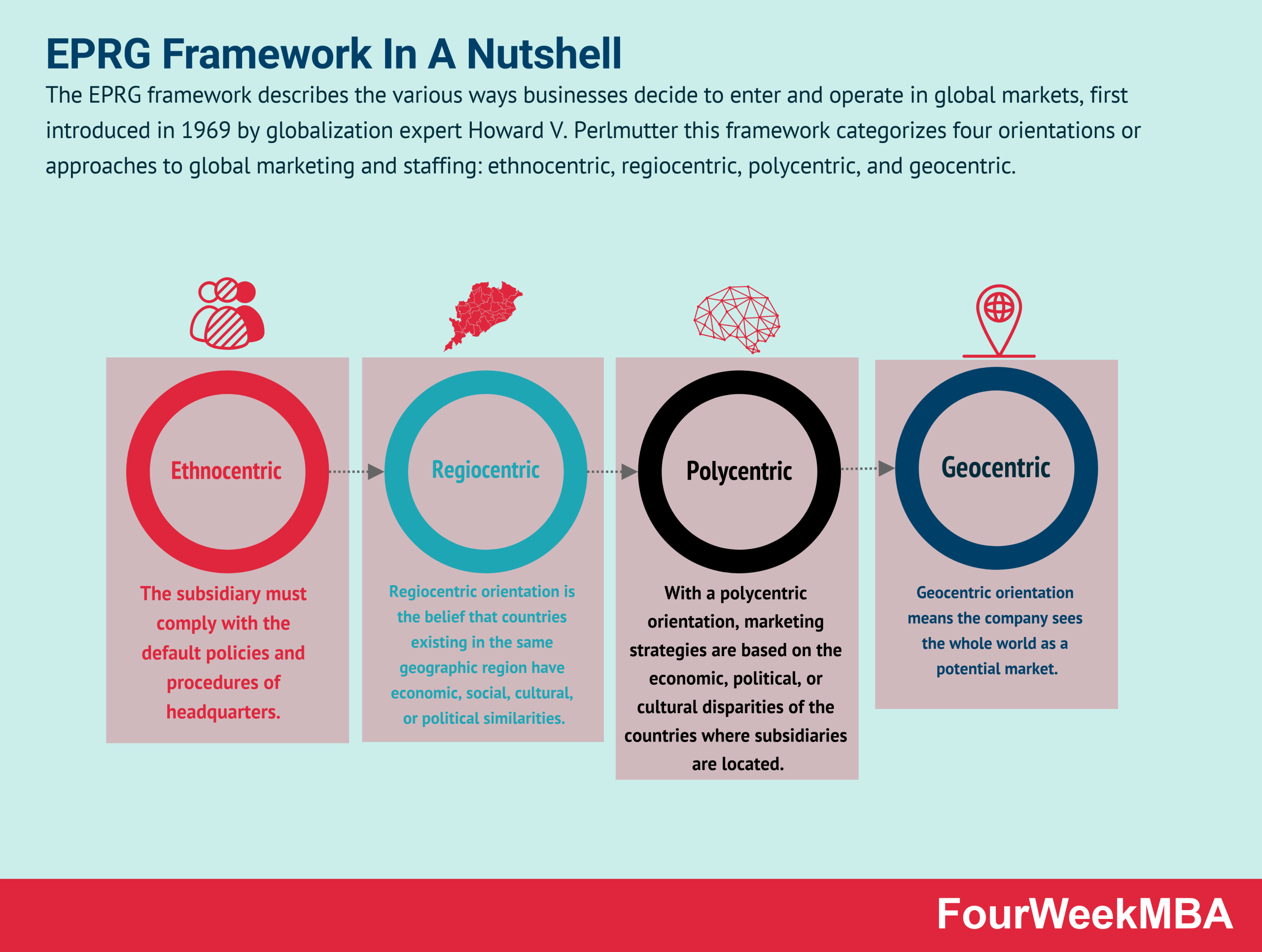 The EPRF framework was first introduced by globalization expert Howard V. Perlmutter in a 1969 journal article entitled The Tortuous Evolution of Multinational Enterprises.

Perlmutter argued that the way a company responds to global market opportunities depends on the assumptions management holds about the nature of international marketing. These assumptions, which Perlmutter called orientations, dictate how a company manages operations between the headquarters in its home country and its foreign subsidiaries.

The four orientations of the EPRG framework

Here, the subsidiary must comply with the default policies and procedures of headquarters. This means the company does not adapt its products to the needs or wants of the other countries they operate in. There are no changes in product specification, price, or promotional strategy.

Essentially, management believes that employees native to the home market can do a better job driving the company forward overseas than their non-native counterparts. An ethnocentric orientation may also arise naturally because of a shortage of expertise in a foreign country.

Ethnocentric orientation can lead to problems in foreign markets. When Nissan exported cars to the United States, many vehicles failed to start in the much colder North American winters. Nissan also made the mistake of assuming drivers would place a blanket over the engine to warm it up – which is what citizens in the freezing north of Japan did.

Regiocentric orientation is the belief that countries existing in the same geographic region have economic, social, cultural, or political similarities. As a result, the strategies developed for one country are effective when deployed throughout.

Coca-Cola has used regiocentric orientation to market its carbonated beverages in the sub-continent region consisting of the Indian, Pakistani, and Bangladeshi market.

With a polycentric orientation, marketing strategies are based on the economic, political, or cultural disparities of the countries where subsidiaries are located. Polycentrism is the opposite of ethnocentrism in that the business seeks to do things the way locals do.

McDonald’s is perhaps the best example of polycentrism in action because its restaurants are sensitive to the peculiarities of different markets. In India, McDonald’s serves vegetarian food because Indian citizens view cows as sacred. In France, Germany, and Portugal, restaurants serve wine in addition to soft drink.

Geocentric orientation means the company sees the whole world as a potential market. In other words, they see a negligible difference between countries because consumers have more or less the same needs. While differences do exist in reality, the geocentric approach assumes most differences will be forgotten or accepted by the target audience.

Given there are no explicit barriers between the headquarters and its subsidiaries, it can be expensive and challenging to overcome discrepancies in labor standards and customer preferences. However, with a unified strategy, this orientation rewards the significant investment by making the firm more agile and responsive to change.

American cable channel MTV is seen all around the world but there is little difference in how the channel is branded or presented. Each channel is named after the country it operates in, such as MTV India, MTV Korea, and MTV China.