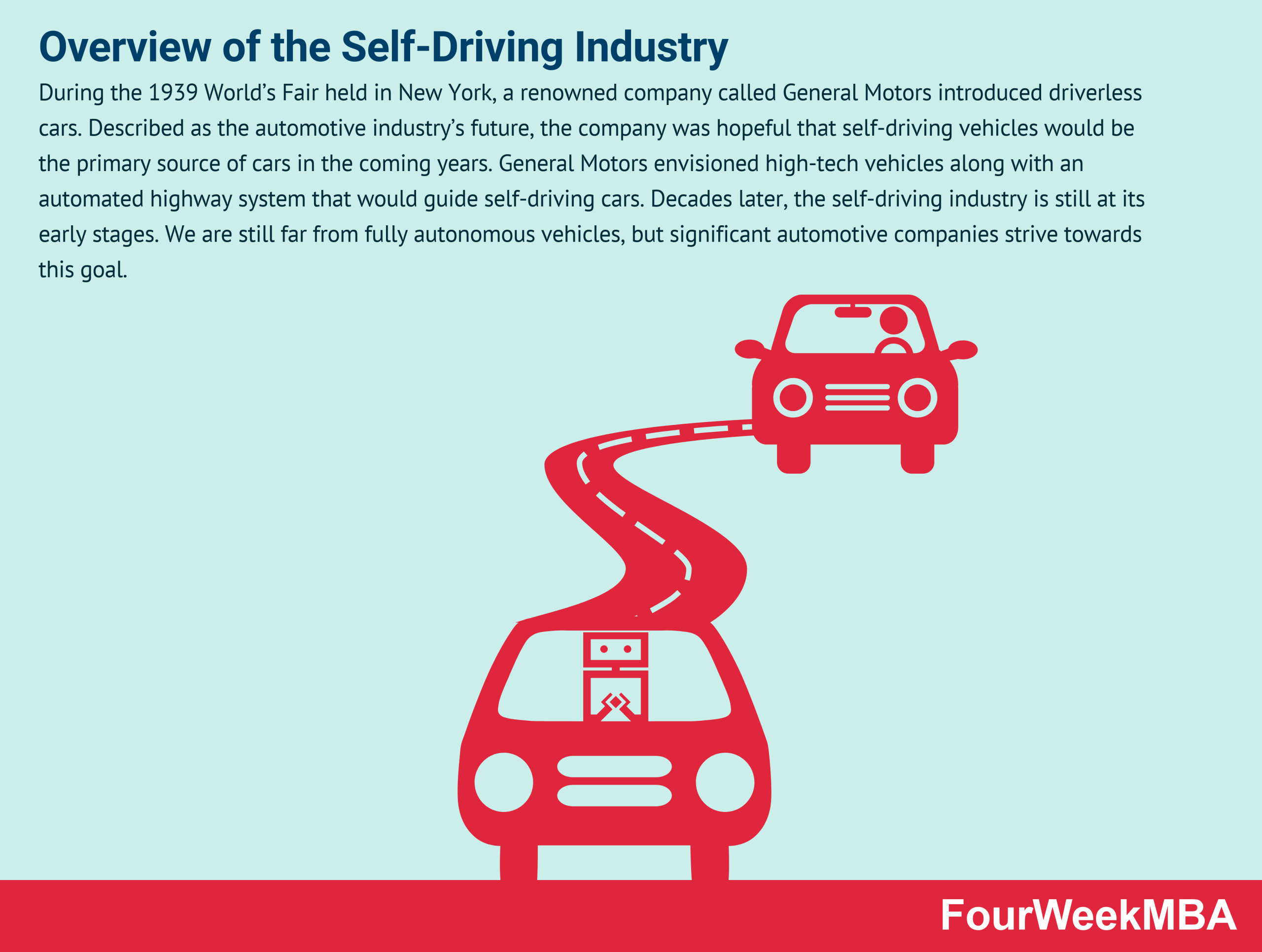 The idea behind autonomous vehicles traces much further back than when Google introduced self-driving cars. In fact, the idea dramatically predates Google.

During the 1939 World’s Fair held in New York, a renowned company called General Motors introduced driverless cars. Described as the automotive industry’s future, the company was hopeful that self-driving vehicles would be the primary source of cars in the coming years. General Motors envisioned high-tech vehicles along with an automated highway system that would guide self-driving cars.

Decades later, the self-driving industry is still at its early stages. We are still far from fully autonomous vehicles, but significant automotive companies strive towards this goal. After all, they share a common objective of transforming cars into a catalyst of safe transportation and convenience.

There is no doubt that fully autonomous vehicles are coming sooner than we think, seeing the self-driving industry’s stride throughout the years.

The first self-driving car had several sensors in its front end. These sensors aimed to capture the signals from the magnetized spikes embedded in the roadway. It allows vehicles to detect their environment and steer the wheel left or right accordingly.

By 1977, the Japanese automotive industry decided on adapting this concept to develop its own self-driving car technology. Bringing improvement to the idea, they utilized a camera system instead of metal sensors. The role of the camera is to relay the images of the road to the computer in real-time. The only issue with this development is its limitations. Autonomous vehicles are only allowed to travel at speeds below 20 mph.

A decade later, Germans introduced their very own self-driving car. VaMoRs is an automotive vehicle with built-in cameras that detect and react to its environment. Unlike the Japanese development, you can drive these vehicles at up to 56 mph.

Presently, several autonomous vehicles get introduced by large automotive corporations. Although most of these cars are considered semi-autonomous, they received a lot of traction from many consumers. Semi-autonomous vehicles have features such as assisted parking systems, braking, and steering functionalities. Instead of placing full reliance on camera systems, most autonomous vehicles of today utilize GPS to detect their environment. On top of that, there are state-of-the-art sensors that can tell if there are lane boundaries, unexpected boundaries and detect signs and signals.

As self-driving car technology becomes more widespread, we expect fully autonomous vehicles to become a reality shortly. Several US states already formulated legislation surrounding the use of autonomous cars in preparation for this breakthrough.

The Future of Autonomous Vehicles

Among many other benefits of self-driving automobiles, the most important one focuses on promoting road safety. The automotive industry continues to push this initiative to reduce the number of incidents that resulted from impaired driving. Driving under the influence has caused multiple casualties over the years, which is solvable by self-driving cars. Regardless of inevitable distractions, conditions of the driver, or their behavior, automated driving can transport passengers safe and sound.

Making roads safer for everyone, here are the efforts of the most popular automotive companies towards self-driving car technology:

Following General Motors’ vision towards the automotive industry’s future, they continue to develop self-driving cars throughout the years. In 2016, GM invested $581 million to acquire Cruise Automation, a self-driving car startup company. A year later, the renowned company built research and development facilities to assist Cruise Automations. This initiative did not just bolster the development of autonomous vehicles but also opened thousands of new job opportunities.

Despite the continuous development of self-driving cars, GM did not notify the public about its timeline. They are seemingly taking their time to head in that direction, deploying many autonomous electric vehicles in the future. There are rumors that the notable carmaker is investing in a ride-sharing company called Lyft following its self-driving initiatives. Spending half a billion dollars on Lyft, GM purchased 9% of the ride-hailing platform’s stake. As a result, many experts predict that GM is leveraging self-driving cars into mobility-as-a-service. Establishing an integrated network for on-demand autonomous vehicles allows them to maximize to full potential without going beyond their capacity.

Ford began its self-driving car initiatives investing about $1 billion in the robotics company Argo AI. Former leaders of Google and Uber initially founded Argo AI. This partnership combines the tech expertise of Argo AI and Ford’s industry experience to streamline Ford’s plans. Ultimately, the goal of the famous carmaker is to develop a fully autonomous vehicle in 2021. Similar to General Motors, these cars aim at ride-sharing platforms.

In late 2017, Honda revealed their plans with Waymo to develop self-driving cars. Waymo is an independent company of Alphabet, which is formerly the car project of Google. Honda released a statement that its primary objective is to promote autonomous vehicles by 2021. The automaker is planning to mass-produce self-driving cars from its newest Legend sedan.  Featuring the Traffic Jam Pilot, it can detect the movement and elements in its surroundings. This advancement eliminates the need for drivers to pay attention to the traffic signages and signals.

Volvo aims to transform the ride-sharing industry along with the luxury market with autonomous vehicles. In 2016, Volvo spent $300 million for a partnership with ride-sharing platform Uber. To further the integrated network of on-demand self-driving cars, they supply the vehicles for Uber’s self-driving tests.

The efforts of Hyundai towards developing self-driving cars are focused on making them more affordable for the masses. They partnered with another renowned automaker called Kia, spending $4 billion for the joint venture. The company is planning on mass-producing autonomous vehicles in 2021 and introducing driverless cars in 2030.

In 2016, BMW collaborated with Intel and Mobileye to further the development of self-driving vehicles. They are aiming to introduce a series of fully automated cars in the future for commercial use. iNext EV is the newest semi-autonomous manufactured by BMW to be released in early 2021. Its automated driving system offers unparalleled performance providing access to highways at a maximum speed of 85 mph.

Tesla continues to develop high-tech autonomous vehicles over the years. One of their latest production includes Tesla Autopilot, offering an advanced driver-assistance system. State-of-the-art features involve lane centering, traffic-aware cruise control, self-parking, automatic lane changes, semi-autonomous navigation on limited-access freeways, and automatic summoning car. Tesla is planning on introducing a full self-driving package paid via subscription. It is going to be available this year, priced at around $10,000. Although it seems like a breakthrough for the automotive industry, this package promotes semi-autonomous features. Sensors can help drivers automate parking, switch lanes, and detect stop signs and traffic lights.