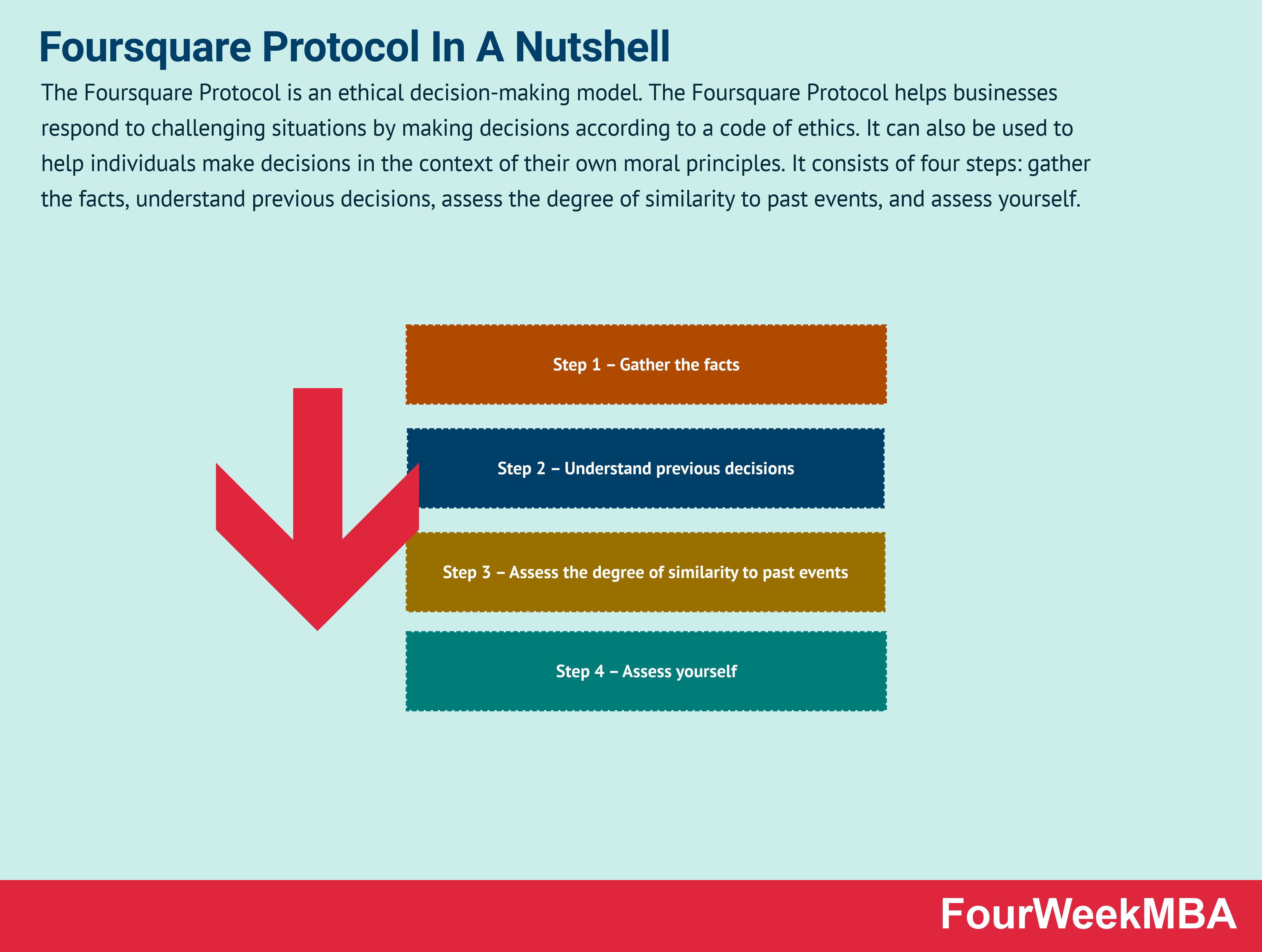 The Foursquare Protocol is an ethical decision-making model. The Foursquare Protocol helps businesses respond to challenging situations by making decisions according to a code of ethics. It can also be used to help individuals make decisions in the context of their own moral principles. It consists of four steps: gather the facts, understand previous decisions, assess the degree of similarity to past events, and assess yourself.

Decision making is arduous at the best of times, but decisions that raise ethical issues can be particularly challenging.

While legislation can help guide decisions relating to discrimination and conflicts of interest, the law only covers so much. In many business scenarios, an understanding of how to behave ethically is vital.

An oil company guided by the law alone would seek to drill in countries with weak legislation to maximize profits. A similar company guided by ethics, on the other hand, would consider the impact of drilling on the environment and the local community.

The four steps of the Foursquare Protocol

The Foursquare Protocol involves four different steps. Only once each step has been completed should a decision be made.

The four steps are:

Separating evidence from opinion is critical. Evidence can be directly observed or obtained from conversation or research. Foursquare Protocol creator Stephen Goldman notes that the quality of the final decision depends on the quality and breadth of the facts gathered.

How were similar situations resolved in the past? What was the nature of penalties or punishments? The latter question is important because it ensures that the business acts fairly. It also ensures that decisions are consistent with previous company actions or similar companies in the relevant industry.

Step 3 – Assess the degree of similarity to past events

With the list of previous actions, assess the degree to which they are like the current event. Here, it’s important to note the significance of being able to make distinctions between past and previous events.

Some distinctions will be insignificant, while others are more critical. The ability to discern between the two makes a skilled ethical decision-maker. A company may identify that the legalization of recreational marijuana is a critical distinction that will force them to review their drug policy.

After assessing the facts, it is time to make a situation. Three factors must be considered before doing so:

Supervised vs. Unsupervised Learning In A Nutshell