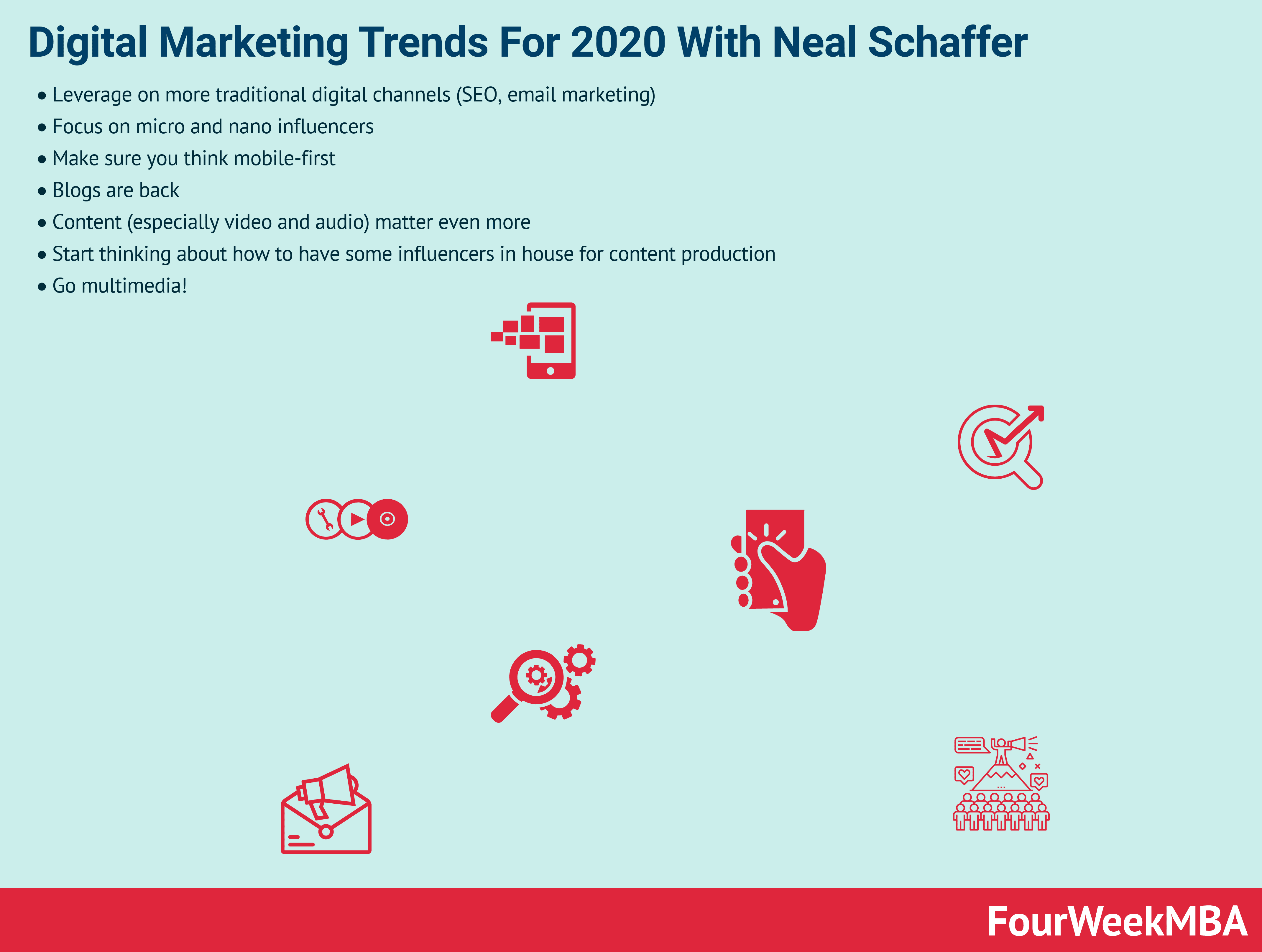 Neal Schaffer, Digital and Social Media Marketing Speaker & Consultant and Author of the upcoming book “The Age of Influence” (you can also follow him on his blog) is sharing with FourWeekMBA some of the key digital marketing trends for 2020!

Can you tell us a little bit more about yourself and your experience with social selling?

NS: I have been involved in the industry that we call social media, social media marketing, and/or social selling. There’s a lot of different words people use to describe it. I began professionally, actually, before social media.

My background before the advent of social media was B2B technology sales, business development, and marketing. I actually just organically began to blog about LinkedIn back in 2008, which led to my first book in 2009 called Windmill Networking: Understanding, Leveraging and Maximizing LinkedIn.

And that’s where I launched Windmills Marketing, my social media strategy consultancy, which since then has really spawned a career in speaking, in training, in teaching, and of course in consulting and implementation.

I teach social media marketing and social selling to executives at three different universities. Rutgers University in New Jersey in the United States. I fly every year to Europe, in Dublin, to teach at the Irish Management Institute. And every two or three years I teach at the University of Jyvaskyla. They have an executive MBA program called Avance in Helsinki, Finland.

I also, obviously, consult with companies. Recently, I’ve been focusing a lot on influencer marketing, and I have a book coming out on this topic, The Age of Influence, which will publish March 2020.

NS: As companies begin to rationalize their marketing spend what I believe is going to happen is there’s going to be an appreciation for older methods of digital marketing.

What I mean by that is:

As social media become more pay to play customers’ acquisition costs go up. There is just a remapping, where the money is being spent and the results of that money.

From a brand awareness standpoint, top of the funnel perspective as social media is extremely powerful, obviously, but from companies that are looking for more direct ROI that money in social media is primarily going be spent in paid social.

Why micro and nano influencers are potential game-changers for any brand?

NS: One trend that we didn’t bring up, which I’m writing a book on it is called the age of influence, which is going to come out on March 17th has to do with the emergence of influencer marketing.

So with customer acquisition costs going up and social, it’s time for companies to, and more and more companies will leverage the power of others.

So my definition really entails. The traditional influencers that we think of, but also your customers, your fans, your partners, even your employees. See today, a lot of people look at influencers in the influencer marketing industry. We look at micro-influencers, and even nano influencers and a nano influencer could have a thousand or 2000 followers.

So we get to the point where there’s a lot of people out there that have perceived influence. So how many of your employees have over 500 LinkedIn connections or have a thousand followers on Instagram.

You might be surprised how many there are out there. I do believe that influencer marketing becomes another part of the mainstream marketing mix that companies are leveraging as a type of performance marketing, a type of paid media.

But really thru those collaborations are it’s possible to achieve incredible value, above and beyond potential conversions. And really being able to tap into the minds of the content creators that are extremely creative, that are good at engaging with people and often that know the interests of people and what clicks in social media more than some brands do.

So that’s where I see the market going in 2020. Obviously nothing revolutionary. It’s always an evolution, but I do believe that 2020 being the second decade of social media marketing and sort of a reset and a better.

Why changing the mindset to mobile-first is important?

NS: Some things I didn’t talk about mobile. Well, you better be mobile-ready if you’re not. I do believe that being mobile-ready entails a lot of different things with user spirit, user interface, customer experience.

One thing that I have done with my own website is really working on page speed.

And I think that if you are not going to go in the Google AMP direction, you want to make sure that your website speed is just as fast as possible. And this means just getting rid of clutter, getting rid of irrelevant messages, images.

In the case of WordPress plugins and really having a stripped-down bare to get delivering on what you need to deliver in a very, very fast way.

NS: A website is a growing trend as well. In the new year what else we got? Customer experience has been top of mind of CMOs for a while now. I think we’re going to see more companies invest in that as well. That’s sort of a different sort of trend that we’ve been talking about.

It brings together a lot of these other things like social and email and all the different touchpoints that a company has, not just from a marketing perspective or from customer service, a customer support perspective as well. So I do believe that marketing gets included as part of that entire sort of spectrum of touchpoints.

Companies that do it well are still foreign and few. I do believe that influencers become influential because they’re great content creators and they create better content, video content that even brands can do.

So with video and with these multimedia types of creative content creators, we’ve seen a lot of companies really start to leverage influencers as in house content creators. And I do believe that we’re going to see more of that as well.