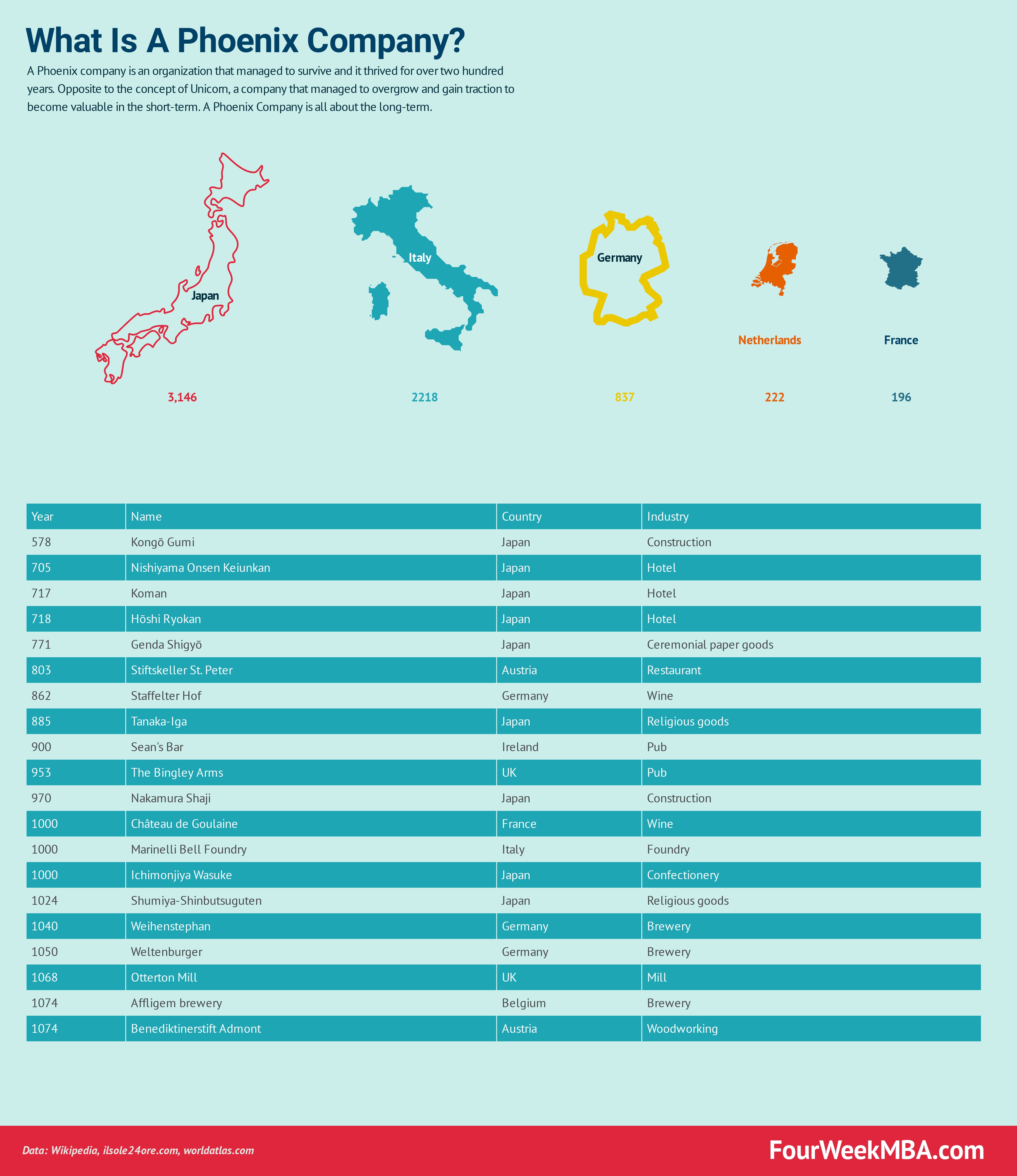 A Phoenix company is an organization that managed to survive and it thrived for over two hundred years. Opposite to the concept of Unicorn, a company that managed to overgrow and gain traction to become valuable in the short-term. A Phoenix Company is all about the long-term.

In the last decade, Unicorn Companies have become the most admired in the world. Those companies are the ones that experienced massive growth and potential to reach billion-dollar marks.

While Unicorn Companies and Startups do capture most of the media attention. There is another kind of company that a few know about. Those are companies that have managed to live for more than two centuries.

In a tech world that prioritizes growth over anything else, there isn’t yet a company that can be classified as a Phoenix.

First, because Silicon Valley is a phenomenon, which is relatively young. Fred Terman, considered “the Father of Silicon Valley” died in 1982. And the birth of the Silicon Valley phenomenon can be dated to the 1940s and 1950s. When Terman, as dean of engineering at Stanford encouraged young students also to pursue their own companies.

Second, companies coming out from innovative business models, that pursue growth over else, might be able to create initial traction and advantage, but over time they are not able to deliver consistent results. For instance, companies like Google and Amazon that came out from the ashes of the dot-com bubble also became the most promising companies.

Third, Unicorn Companies become often a good prey for larger organizations, that have the liquidity to buy them up. Therefore, before a Unicorn might get listed via an IPO and become too expensive, large organizations might buy them up for a relatively low price.

Thus, a Unicorn Company has mastered the short-term game. It has managed to understand how to gain traction so quickly, to become among the most valuable companies in the world. However, Unicorn Companies might either go bust or become part of larger organizations. And only a few might thrive in the long-run.

A Phoenix instead has mastered the long-term game. It might not have become a billion dollar company. Or even if it did it managed to survive many transitions, generations, and eras.

Related: What Is A Unicorn Company? The Top 25+ Unicorns Business Models For 2019

A glance at the Phoenix landscape

Until recently (2006) the oldest company alive was Kongo Gumi, a construction company headquartered in Osaka, Japan. The company was absorbed in 2006, as part of another company called Takamatsu Kensetsu.

This means the company managed to live for over 1,400 years. The key, in this case, seems to be the family tradition, passed down from generation to generation since its founders.

These construction techniques leveraged on these traditional tools and techniques to build and maintain and repair Buddhist temples.

While I didn’t find any scientific research that could point out what made those companies so everlasting, some of them seem to be family businesses. Yet the point of this article is the long-term focus.

How a bunch of new companies managed to survive for centuries and be passed on from generation to generation. In a world driven by companies that try to dominate the market at full speed.

I thought it might make sense to stop for a second to look at those companies and think how entrepreneurship means also thinking in terms of generations.

Data for the list included in the infographic: The Oldest Companies Still Operating Today