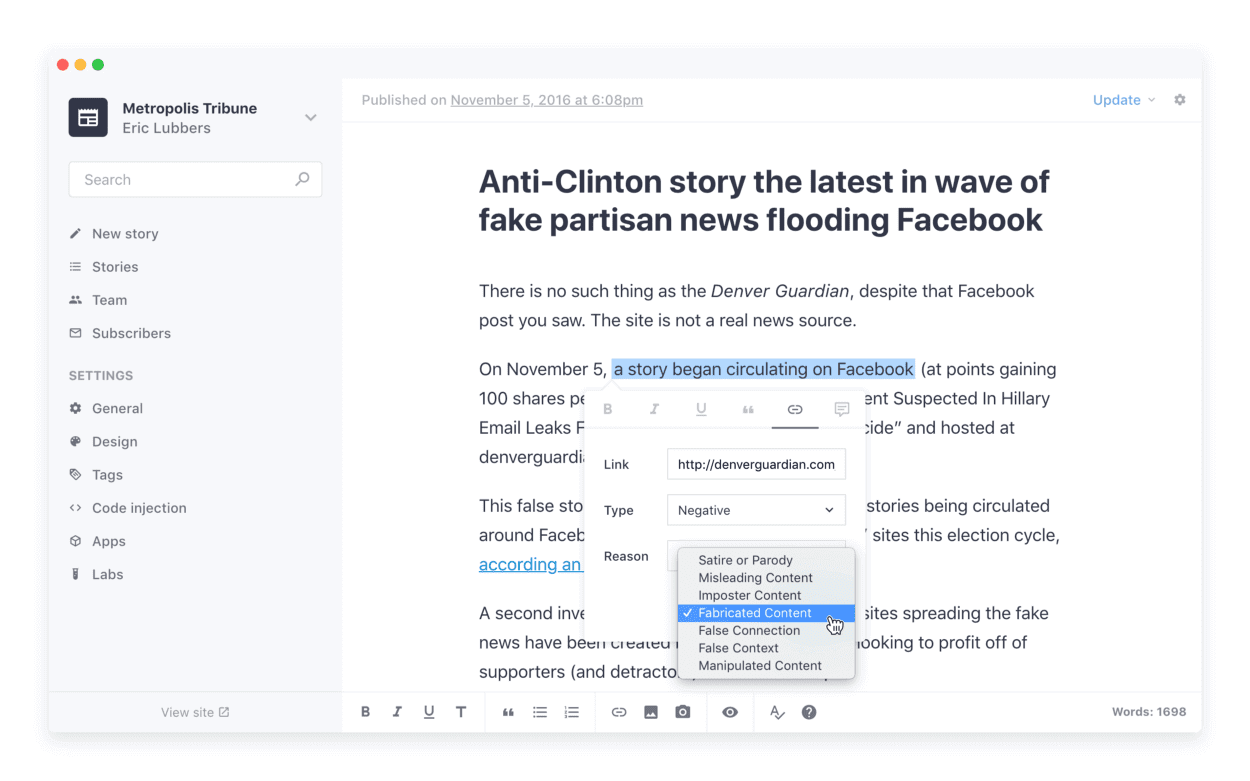 Bitpress is a blockchain­based ledger of trust that leverages a decentralized network of journalists to determine the credibility of news. Bitpress enables journalists and news organizations to publish bulletins in the form of original reporting, or as a response to anything on the internet, indicating a vote of credibility. The resulting network of verifications determines not only if a source is credible, but also identifies consensus and bias within the network itself

In this article, we’re diving a bit on the White Paper of Bitpress to see why this might be a good solution for the media industry

The Bitpress network is comprised of a few simple components that enable several complex use cases:

What token will Bitpress use?

Native Bitpress tokens, called XBP, are used throughout the network to pay transaction fees for publishing Articles and offering Bounties to perform work, among other things. Technical details are discussed in Token Economics, Section 5, later in this paper.

What is a Bulletin?

Technical aspects of a Bulletin are:

How do bounties work?

Bounties contain smart contract that hold onto funds like escrow accounts. The sender pre­funds with XBP, but additional XBP can be contributed by other users using a Tip to increase the total Bounty paid when fulfilled.

How does the Bitpress protocol work? The proof of trust protocol

Bitpress uses Proof of Trust as its consensus protocol. Nodes are selected pseudorandomly to generate block, with more trusted nodes having a greater chance of being selected.

Bitpress leverages the security of Proof of Work with the utility and governance of Proof of Stake.

Blockchains are natively transparent and decentralized, both key components for any successful trust protocol.

How does that Bitpress Rank system work?

Bitpress Rank (BPR), an algorithm for measuring the credibility of news. Broadly speaking, the theory behind the process is:

What factors are taken into account in the Bitpress Ranking system?

How does the Bitpress PageRank algorithm work?

Bitpress uses these links to construct a network of cross-validations between all media organizations.

Isn’t this what Google’s PageRank does?

How does BitPress’ PageRank algorithm differ from Google’s PageRank?

In order to account for links that do not signify endorsement, Bitpress allows journalists to indicate the context of their links.

Another way that Bitpress differs from Google’s algorithm is that PageRank treats all links equally, even those from potentially untrustworthy domains.

In contrast, Bitpress weighs the impact of each link according to the overall trust of the publisher.

Publishers must pay a market rate in XBP based on transaction size and network congestion. These fees act to disincentivize spam and other unwanted contentPublishers have the option of hosting and running full nodes, or Power Nodes, that act similarly to Bitcoin miners, collecting and splitting the total XBP tokens of all Bulletin fees contained in a block in exchange for powering the network.

As expressed in the white paper:

Experts believe that users will never pay for news, but we believe that paying for news simply needs to be easier

To read more you can download the Bitpress White Paper.