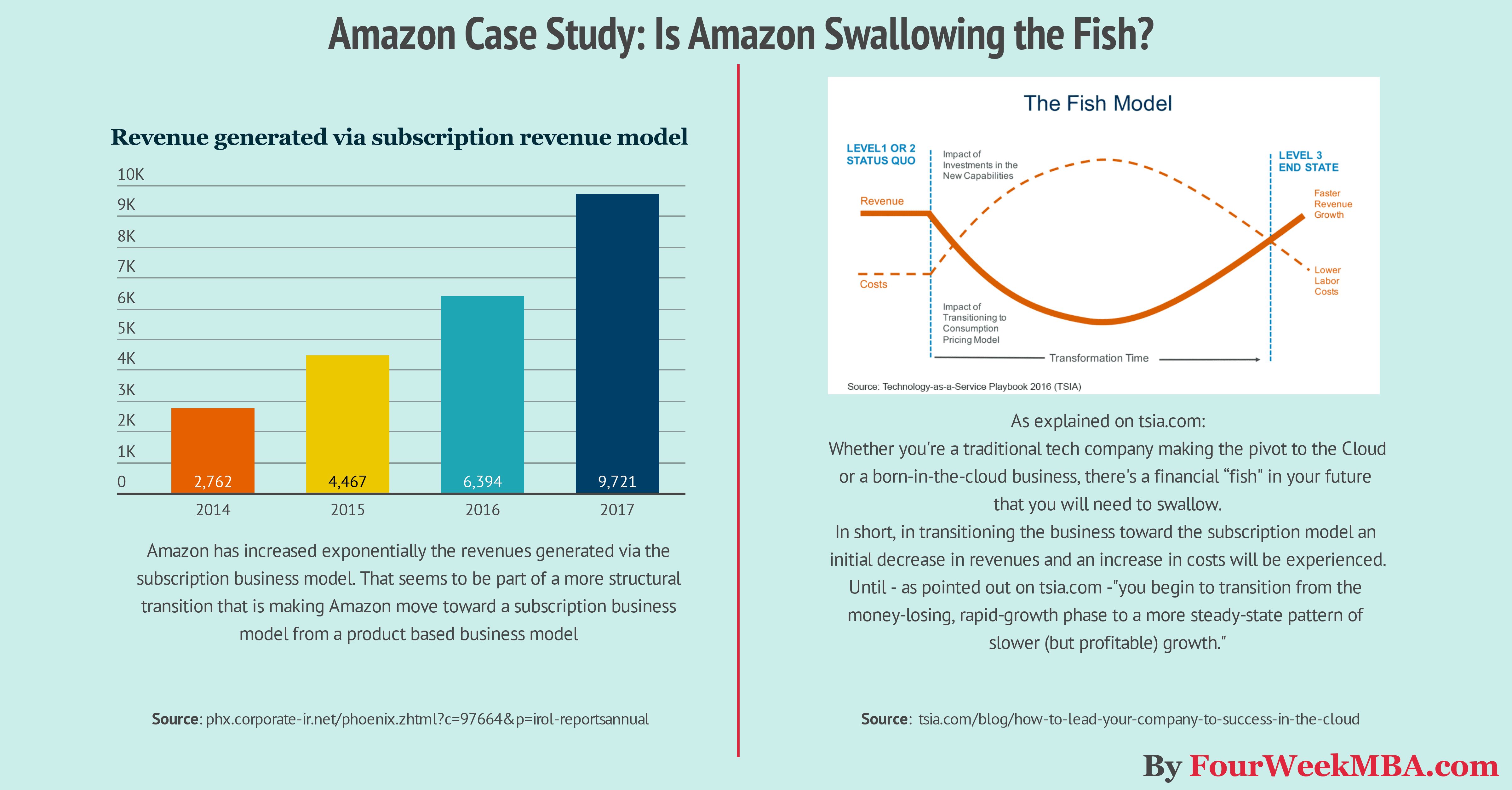 In this article, we’re going to see an interesting case study and how Amazon seems to be changing its business strategy.

In fact, since 2014 Amazon has been pushing more and more from a solely product-based

We’ll see how and what this implies.

The power of the subscription business model

On this blog, we covered at great length the power of the subscription business model.

In part, this is due to the fact that cloud technologies offer themselves for consumption. In part, that is also a mindset shift from ownership to usage.

For instance, Amazon is pushing to bring as many people as possible to become part of their Amazon Prime Program.

This isn’t by chance. In fact, Amazon has been investing massive resources to enhance their membership revenues. That’s also the reason why Jeff Bezos said: “When we win a Golden Globe, it helps us sell more shoes.”

In fact, Amazon is investing billions of dollars in their Studios to develop as much original content as possible in order to attract as many subscribers, within the Amazon prime program.

In 2017, Amazon revenue generation still saw its online stores as the primary source of income.

However, there are two important aspects to point out.

In short, Amazon leverages on its inexpensive prices, to hook as many people as possible to the Amazon marketplace.

Second, even though subscriptions still represent only 5.47% of Amazon total revenues, they grew exponentially since 2014:

As pointed out on Amazon 2017 annual report, in relation to Amazon Prime:

13 years post-launch, we have exceeded 100 million paid Prime members globally. In 2017 Amazon shipped more than five billion items with Prime worldwide, and more new members joined Prime than in any previous year – both worldwide and in the U.S. Members in the U.S. now receive unlimited free two-day shipping on over 100 million different items. We expanded Prime to Mexico, Singapore, the Netherlands, and Luxembourg, and introduced Business Prime Shipping in the U.S. and Germany. We keep making Prime shipping faster as well, with Prime Free Same-Day and Prime Free One-Day delivery now in more than 8,000 cities and towns. Prime Now is available in more than 50 cities worldwide across nine countries. Prime Day 2017 was our biggest global shopping event ever (until surpassed by Cyber Monday), with more new Prime members joining Prime than any other day in our history.

That is also why Amazon is doubling down with initiatives like Amazon Prime Day:

What can we expect from this change in business strategy?

Changing a business model isn’t a simple or linear process.

Instead, that is a process that requires tinkering,  experimentation and most of all long-term vision.

In fact, it isn’t surprising to see revenues and profits fall when companies switch their focus from a product-based to subscription based.

This process is called fish model:

Whether you’re a traditional tech company making the pivot to the Cloud or a born-in-the-cloud business, there’s a financial “fish” in your future that you will need to swallow.

In short, in transitioning the business toward the subscription model an initial decrease in revenues and an increase in costs will be experienced. This financial situation takes the shape of a fish.

Until – as pointed out on tsia.com -“you begin to transition from the money-losing, rapid-growth phase to a more steady-state pattern of slower (but profitable) growth.“

Many tech companies are experimenting with new business models. This is a normal process.

In fact, as economic, technological, socio-cultural scenarios change, companies need to adapt at a aholistic level.

That requires a swift move toward new business models. It’s interesting to see how Amazon is moving toward a subscription business model and what that implies.

In fact, most companies that start experimenting with subscription models – especially when coming from a product-based business model – experience periods of losses that are known as “swallowing the fish.”

Is Amazon going to swallow the fish successfully?

What to read next: How Amazon Makes Money

Resources to get started with your business:

Amazon runs a platform business model as a core model with several business units within. Some units, like Prime and...