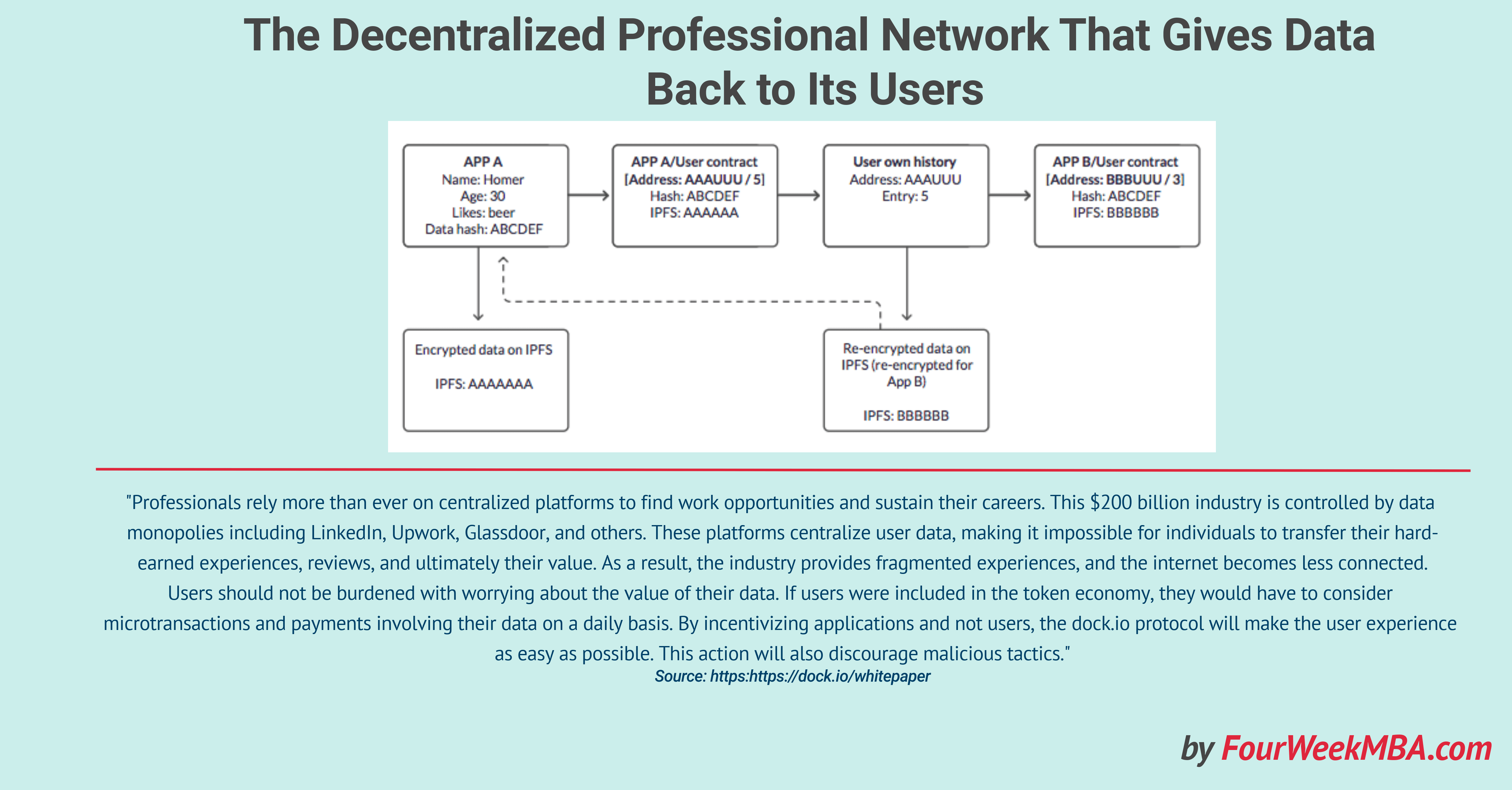 In fact, the main aim of the platform is to allow users to retain ownership of massive amounts of professionals’ data and information that otherwise are siloed within large tech corporations.

Thus, dock.io attempts to give users full control of their data while applications receive compensation for data exchange.

How does the dock.io protocol work?

As specified in dock.io White Paper:

The dock.io protocol is a special purpose decentralized data exchange protocol. This protocol is intended to incentivize the exchange of work experience, reviews and professional connections, and can be expanded to include any type of shareable data. In addition, the tokens serve as the proposal and voting utility to guide the evolution of development and changes to the dock.io protocol. All token holders can contribute proposals and vote on changes and updates they’d like to see implemented. Applications receive tokens for data exchange. Users will have absolute control over their data through the use of a hosted third party service.

In short, data such as:

is managed by a decentralized protocol that makes it easy to control by users.

Token holders take part in the process of proposals and votes that affect the future strategy of dock.io.

Professionals rely more than ever on centralized platforms to find work opportunities and sustain their careers. This $200 billion industry is controlled by data monopolies including LinkedIn, Upwork, Glassdoor, and others. These platforms centralize user data, making it impossible for individuals to transfer their hard-earned experiences, reviews, and ultimately their value. As a 4 result, the industry provides fragmented experiences, and the internet becomes less connected.

4. ERC201 token standard and easy integration with wallets and exchanges.

How is data managed within dock.io?

Put it shortly all the data on the platform gets encrypted and it gets decrypted only when the parties willingly will exchange them. This implies control of the data by the users that create them.

Users can opt to publish specific unencrypted data formats such data could include but is not limited to:

This data, of course, would flow on the web and it can’t be taken back.

How is dock.io reward system organized?

Tokens are used to incentivize the development of the platform. However, as mentioned in the dock.io White Paper users are not included in the reward as this might lead to manipulative attempts and malicious tactics:

Users should not be burdened with worrying about the value of their data. If users were included in the token economy, they would have to consider microtransactions and payments involving their data on a daily basis. By incentivizing applications and not users, the dock.io protocol will make the user experience as easy as possible. This action will also discourage malicious tactics.

Instead, applications will pay for accessing users‘ data. Also, each time a user data is sent over to another third party application payment will be triggered within the dock.io protocol.

As further specified in the Dock.io White Paper:

The user can only push an update if the application has paid for the previous one. This way we can ensure that in order to continuously receive updates, application will be forced to pay tokens. This is a similar tit-for-tat relationship as in Bittorrent, but enforced by a smart contract. This also ensures that applications always consume all updates and have constant data updates.

In other words, this system will make the users ability to control their data, rather than the applications using it. In fact, for several applications to use the same data, users will have to approve and consent in case they have received the payment by the first app that created data.

Dock.io vision is quite different from another blockchain platform, like Steemit:

In fact, on dock.io there is one aim: let users control to own and control their data. In fact, dock.io does not reward users for creating data because they believe this would incentivize malicious behaviors that would negatively affect the long-term success of the platform.

Thus, by allowing users to own and exchange, their data for rewards dock.io tries to align the interests of the users to carefully pick the applications to whom they make this data accessible.

Also, users take part in the proposal and voting process. In other words, users will have a say in the future development of the platform.

Nick Macario and Elina Cadouri both are serial founders. They also co-founded Remote.com a site with over 2.5 million users, connecting millions of professionals with remote and freelance jobs.

As blockchain becomes a more mature technology platform that challenges traditional business model that formed in the last decades are springing up. This leaves space for new ways of monetizing data, which are more symmetric compared to the advertising business model, centralization and lack of transparency that are typical of modern tech companies.

In the meanwhile, you can read dock.io White Paper here.

What Is Steem Debt-To-Ownership Ratio? How to Assess the Financial Health of Steemit

Before you read this, read quickly this to have an overview of how the three main currencies on which Steemit...