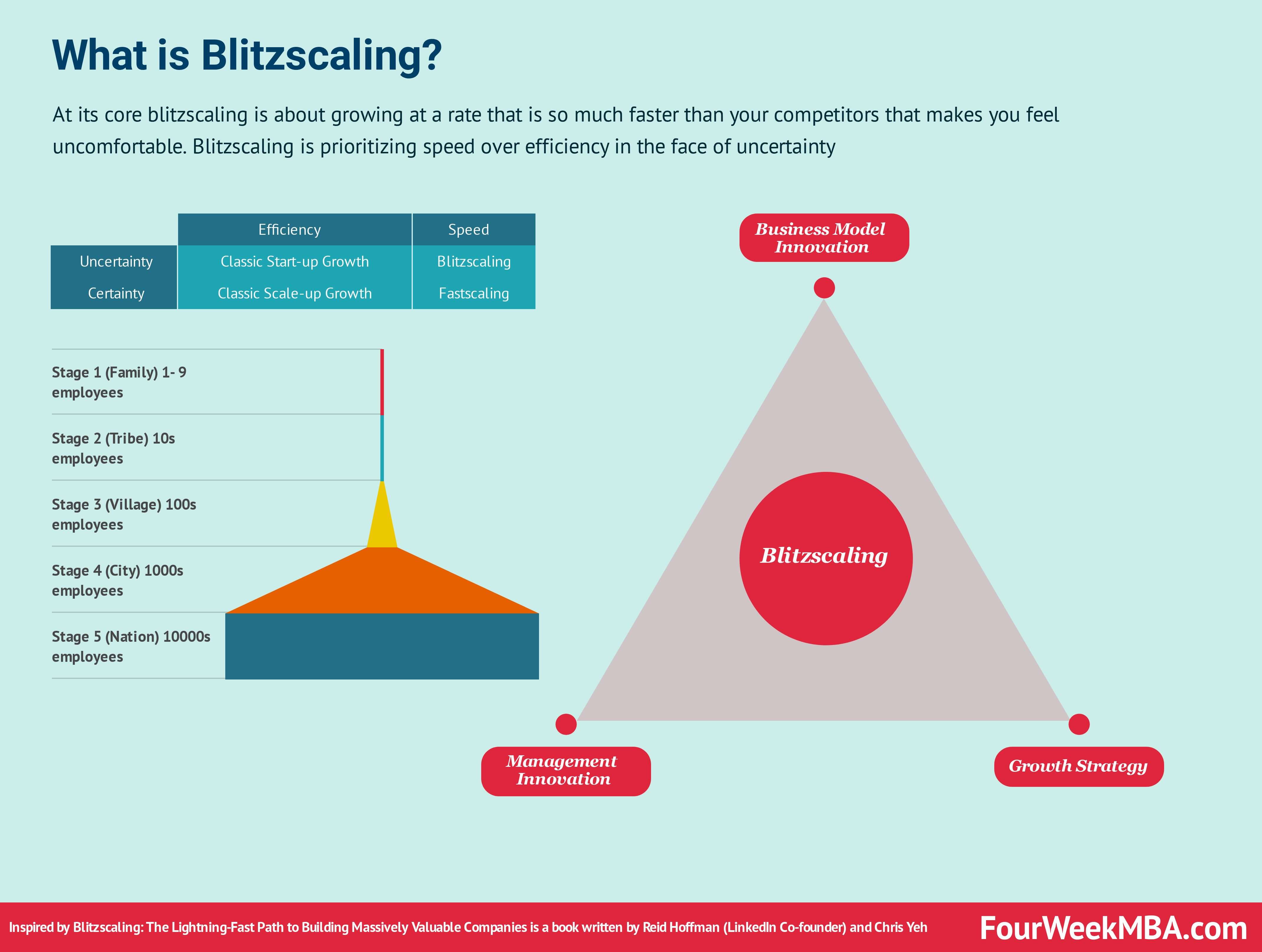 Blitzscaling is a business concept and a book written by Reid Hoffman (LinkedIn Co-founder) and Chris Yeh. At its core, the concept of Blitzscaling is about growing at a rate that is so much faster than your competitors, that make you feel uncomfortable. In short, Blitzscaling is prioritizing speed over efficiency in the face of uncertainty.

Origin of the name

Blitzscaling is prioritizing speed over efficiency in the face of uncertainty.

The name Blitzscaling comes from a World War II association with the term “blitzkrieg” or lightning war, where the attacker risks it all to either win or lose the battle.

Understanding Blitzscaling might means having a framework that can help your small organization to scale up or your large company to also benefit from a new and reinvigorated acceleration, which is critical to survival in a market that changes at a faster pace.

Let’s start from what’s Blitzscaling is not.

Blitzscaling is not growth hacking

Confusing Blitzscaling with growth hacking might be easy. There is a critical difference. Blitzscaling looks at massive growth which is also accompanied by high uncertainty. As pointed out by Reid Hoffman in an HBR interview:

Blitzscaling is what you do when you need to grow really, really quickly. It’s the science and art of rapidly building out a company to serve a large and usually global market, with the goal of becoming the first mover at scale.

Therefore three features of Blitzscaling are:

Thus, rather than a process of experimentation with the aim of testing what works and what doesn’t efficiently, Blitzscaling is about being all in!

Blitzscaling is not a magic formula

Rather than a magic formula that works in each scenario, Blitzscaling follows a framework that revolves around three key ingredients:

Those three key ingredients of Blitzscaling.

What’s Blitzscaling then? There are a few key elements I think are worth highlighting.

Related:  Successful Types of Business Models You Need to Know

Speed in the face of efficiency

This is a critical difference between scale-up and Blitzscale. The former happens in a scenario of certainty and efficiency.

You allocated the resources necessary to test what works and what doesn’t with fewer assumptions as possible.

You have wider margins to test those things up to focus on what works. In a way instead, Blitzscaling is about survival.

Thus, max speed is everything, because if you don’t reach the scale, you might be dead any time soon. That is why efficiency takes a back seat.

Blitzscaling is an uncertain process

As Blitzscaling is an uncertain process, it might also require massive resources as it is a sort of calculated gamble where many mistakes will be made.

Capital will be a crucial element to recover from those mistakes. Making a mistake, also big ones are part of Blitzscaling. In short, those who take the risks of Blitzscaling are able to also amass the rewards by building multi-billion companies at a global scale.

The reward is the first-scaler advantage

One key reward of Blitzscaling is the first-scaler advantage. The first who succeed at Blitzscaling take all or most of the market which gives them a lasting advantage hard to overcome.

What are the stages of Blitzscaling?

The main stages of Blitzscaling usually are:

While this is a simplification, it is crucial to understand that a company which is Blitzscaling will go through several stages, each of which has differentiating features. For instance, in some stages financing might be the most important aspect, while in others building the winning team is.

The Blitzscaling business model canvas is a model based on the concept of Blitzscaling, which is a particular process of massive growth under uncertainty, and that prioritizes speed over efficiency and focuses on market domination to create a first-scaler advantage in a scenario of uncertainty.

FourWeekMBA readapted the concept of Blitzscaling to a business canvas, which is a particular process of massive growth under uncertainty that prioritizes speed over efficiency and focuses on market domination to create a first-scaler advantage in a scenario of uncertainty.

Among the three key ingredients to Blitzscaling, there is business model innovation (actually the most critical element).

According to this framework, business model innovation can be achieved based on a few vital components made of four growth factors and two growth limiters.

A glance at the four key growth factors

The four growth factors are:

How large is the market you’re targeting when Blitzscaling? Is it really reachable?

A big market is a critical ingredient for a Blitzscaling business model. This market has to be large enough and reachable. A large market has to be taken into account based on the context. Indeed, launching and scaling a startup in Silicon Valley is not the same as doing it in Italy or Spain.

In general, as pointed out in the book (Blitzscaling: The Lightning-Fast Path to Building Massively Valuable Companies) venture capitalists are usually looking for investments that are returning many times over and can achieve a venture scale. This often implies targeting a market that often is as large as a billion-dollar in annual sales.

Are there existing networks you can leverage on? What viral loops can you create to spread your product/service quickly and at scale?

Often, when you are the incumbent in a new space those who already have an established brand and network, are probably your best option to start.

This concept known in growth hacking as other people’s network is the perfect place to start. One classic example is how Airbnb leveraged on Craiglist to gain initial traction.

Another critical ingredient is about virality and how you can instill it in your product. Usually, virality is achieved via a freemium pattern where a product or part of it is given for free to allow a cheaper and quicker distribution.

When you grow your revenues, do you generate larger amounts of cash available to finance growth?

A gross margin or gross profit is merely the revenues left after subtracting the cost of sales (or the costs you have to sustain to generate the sale).

This metric is fundamental when looking at tech companies as it determines their cost structure and whether they can be financially viable in the long run.

A high gross margin implies that the company will have enough resources to invest even further in the scale of the business. If you look at the Google cost structure and Google business model, you realize how it is engineered to have high gross margins.

Facebook is even a better example with higher gross margins than Google; given the Facebook low cost of traffic acquisition, this social network is a money-making machine. That money is used to keep growing at a fast pace.

Is each additional user joining in bringing a positive effect to the whole platform?

A critical element of an innovative business model built on technological products and services is based on the network effect. This principle is simple yet powerful.

The two growth limiters are:

Is the market satisfied with your product/service? If not what is that it’s missing?

Product/market fit is a well-known concept by anyone who has a minimum of experience in the startup world, and yet that is often misunderstood.

For instance, in general, the product/market fit aims at coming up with a minimum viable product (MVP) that solves a need for a group of people. That MVP will allow an organization to gather more and more feedback about the product and improve it over time.

Are your operations sustainable at meeting the demand for your product/service? Are your revenues growing faster than your expenses?

When you keep growing at a fast pace, often profitability becomes hard to manage. Indeed, focusing too much attention on growth and revenue, but not having enough margins to cover up for the infrastructural cost and human resources might be a big problem and cause of failure for the business.

That is why a business model that doesn’t make sense from the operational standpoint is doomed to collapse overtime!

There isn’t a single way to define what a business model is. For the sake of this discussion, we took into account the Blitzscaling business model canvas.

In short, this is a one-page framework I put together, inspired by the book Blitzscaling: The Lightning-Fast Path to Building Massively Valuable Companies which gives an alternative way to define a business model.

More precisely that is – in my own words – a process of massive growth under uncertainty and that prioritizes speed over efficiency and focuses on market domination to create a first-scaler advantage in a scenario of uncertainty.

This business model can be engineered and designed or figured out along the way.

Ideally designing it would be best as it allows to integrate within it four key growth factors (market size, distribution, high gross margins, and network effects) and avoid the two key growth limiters (lack of product/market fit and lack of operational scalability).

Blitzscaling is a must-read for anyone in the entrepreneurial world – I believe.

Learn how tech companies business models work and the lessons you can learn to scale up your own company: